While I’ve see this western blockbuster filmed in Cinerama a number of times I don’t believe I’ve actually seen it since my adolescent days. It played regularly on TV though I suspect in poor quality and edited down for the sake of commercials into a three hour running time. Revisiting this epic length film proved to be an enjoyable endeavor. One that stirred my emotions as I flashed back to being a youngster watching some of my movie heroes all taking part in the same film packed with action, romance and adventure. While I remembered the majority of the film based on the stars that appeared I didn’t necessarily recall each segment in detail. I say segment due to the fact that the film plays out in chapters utilizing a very familiar voice as the narrator and not one but three well known directors of yesteryear to capture the story of just how the west was won. According to Hollywood and MGM that is.

Rather than attempt to tell the story here let’s instead focus on the cast and crew brought together to entertain movie goers both then and now thanks to home video and more recently, blu ray.

Behind the camera of this 244 minute pioneering adventure are three accomplished directors who had numerous box office hits and in the case of one, 4 Academy Awards for Best Director. I’m speaking of John Ford who along with both Henry Hathaway and George Marshall brought this star studded affair to the screen. The film would win three Oscars for best Sound, Best Film Editing and for James Webb’s Screenplay. It was also nominated for Best Picture, Color Cinematography, Art Direction, Costume Design and for a memorable Music Score from Alfred Newman and Ken Darby.

Serving as narrator was none other than Spencer Tracy.

And now on to the many faces you’re sure to recognize in this frontier tale.

Karl Malden stars as the head of the Prescott Family. “O Lord, without consulting with Thee, we have sent thy way some souls whose evil ways passeth all understanding. We ask Thee humbly to receive them… whether you want them or not! Amen.” 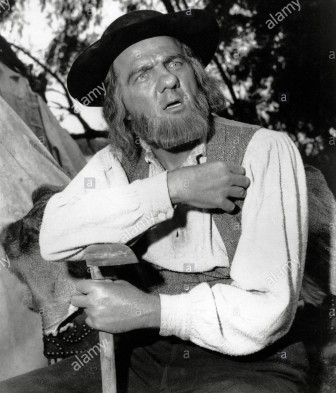 Agnes Moorehead as Malden’s wife. “One liar at a time is enough.” she scolds her hubby after hearing more of his tall tales.

Carroll Baker stars as their young daughter aiming to catch the man of her dreams. “It’s the man that counts. Not where he lives.”

Along comes trapper Jimmy Stewart who she sets her sights on. Might take a heap of convincing for the mountain man who tells her frankly, “Likely I’ll stay drunk for a month. I won’t even remember the fancy gals I dally with and the men I carve up just out of pure cussedness anymore than I’ll remember you.” 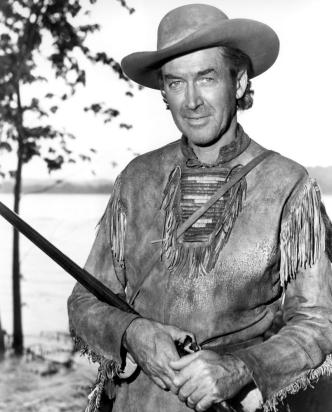 Walter Brennan turns up as a devilish river pirate who along with a gang of cutthroats including an unbilled Lee Van Cleef sets about robbing and killing those travelling upon the river. With murder on his mind and a twinkle in his eye he’ll tell a would be victim, “Nothing but the best for you sir.” 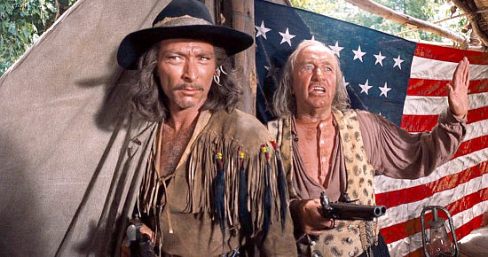 When a wagon train sets out that great character actress, Thelma Ritter, is quick to point out to the film’s one central figure, Debbie Reynolds, “I was hoping to make this trip with a husband. Nearly got one last week.” 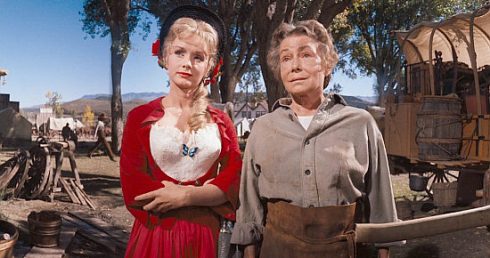 Robert Preston turns in an admirable performance as the leader of the wagon train who has reservations about allowing the single and available Miss Reynolds along on the trail. “Alone AND single? Brings out the devilry in a man. Get’s ’em all worked up and they’re wild enough already.” Turns out that poor Preston ends up with the Ralph Bellamy role …. if you know what I mean. 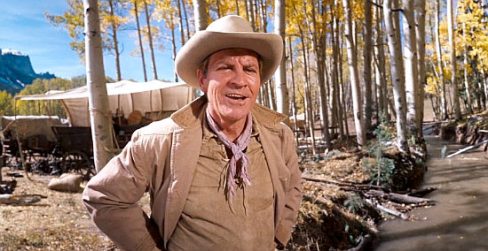 Along comes a tenderfoot gambler looking to hook a well to do lady and Miss Reynolds might be just the winning hand he’s looking for. “I found myself throwing in a winning hand. I just never thought I’d do that for any girl. Lily, How’d you like to hook up with a no-good gambler?” I’m sure you’ll know him as Gregory Peck. 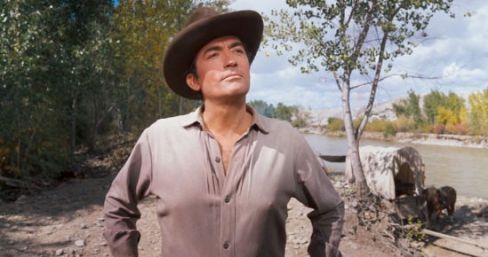 John Ford takes the directing duties as the film turns towards the Civil War allowing for Andy Devine to point out, “There ain’t much glory in tromping a plough.” 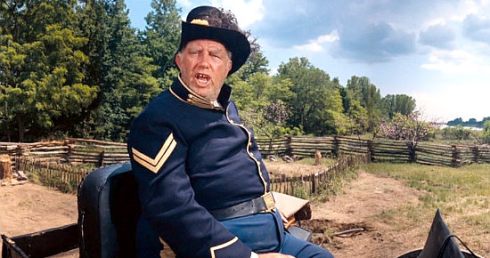 Following the bloody battle of Shiloh where the rivers turn pink, Russ Tamblyn, as a Johnny Reb states, “Don’t seem fitting a man should have to drink water like that. Don’t seem fitting a man should have to do any of the things we’ve done today.” He’ll cross paths with a young George Peppard who will figure prominently over the final half of the film. He’s off to war and learns that, “There ain’t much glory in looking at a man with his guts hanging out.” 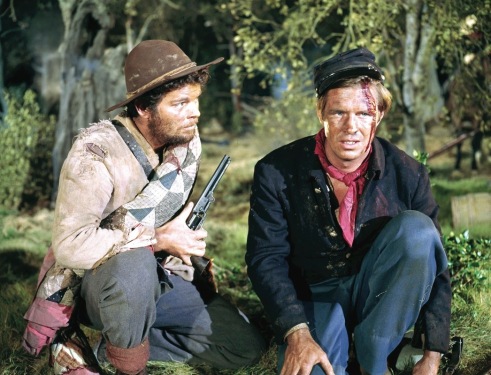 John Wayne as Gen. Sherman and Harry Morgan as Gen. Grant exchange pleasantries at Shiloh. Morgan states, “I’ll approve any disposition you wanna make.” Duke points out, “A month ago they were saying I was crazy. Insane! Now they’re calling me a hero. Hero or crazy I’m the same man.”

With the war over, along comes the railroad and a bullish Richard Widmark, “What’s a railroad anyway? Two tracks and a whistle.” 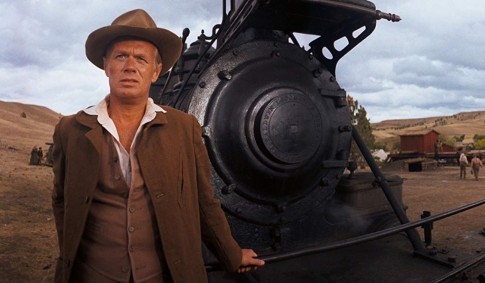 A heavily mustached Henry Fonda gets hired on to shoot buffalo and keep the railroad workers fed. He’ll also be available to mentor Peppard who has come of age as the film winds down. “Settled down for a year once. Took ten years off my life.”

The final stanza of the film brings the law into the land looking to put an end to the outlaw. Lee J. Cobb as an aging lawman tells Peppard, “You should have killed them both that day. But, well you didn’t. There ain’t a thing I can do about it now.” This concerning outlaw Eli Wallach who turns up late in the film looking to repay an old debt to Peppard. 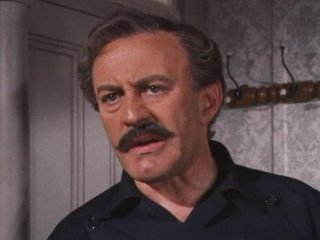 Carolyn Jones has little to do other than fill out the call sheet as Peppard’s wife who would rather he not go after Wallach’s killer. “I’m asking you not to go. Don’t go.” 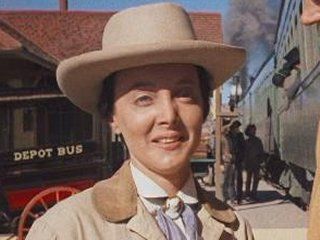 It’s said that Wallach’s colorful outlaw here is what landed him his most memorable role as Tuco in Leone’s classic The Good, The Bad and the Ugly. He’ll confront Peppard before their final confrontation, “I hear you’ve been talking to the Marshal about me. You call that friendly?”

Again it’s really Hollywood favorite Debbie Reynolds who ties the film together. She opens the film as Baker’s sister on the river who follows her dreams and fortunes on the wagon train with Peck. From saloon gal to an aging Aunt for Peppard’s children, perhaps she nails it when she points out, “I guess there’s nothing more pigheaded in a man then his sense of honor.”

Character players? By the score. Keep your eyes peeled and you’ll spot the likes of Mickey Shaughnessy, Raymond Massey in a brief clip once again playing Lincoln, Willis Bouchey, Rodolfo Acosta, Karl Swenson, Joe Sawyer who just might be the hubby Miss Ritter is looking for, John Larch, Jay C. Flippen and according to the IMDB, Harry Dean Stanton, though I didn’t spot him. Plenty of others to seek out as well.

Trivia and film connections? With a cast like this there’s far to many to list out but here’s a small sampling.

Stewart and Fonda are supposed to be close pals in the film. Much like they were in real life but in the film they never share a scene together.

Harry Morgan whose only scene here is opposite The Duke would rejoin the western legend for his farewell performance in 1976’s The Shootist.

Peck and Preston who vie for Debbie Reynolds had shared the screen as far back as 1947’s Hemingway tale, The Macomber Affair.

Six time Oscar nominee, Thelma Ritter, was a cinematic treasure. She had just starred opposite Debbie Reynolds the year before this release in The Second Time Around. One of those six Oscar nods was opposite Richard Widmark in the 1953 classic, Pickup On South Street.

Plenty more so feel free to present a couple connections of your own.

In closing have a listen to the song that is heard throughout the film. One that carries a nostalgic feel as delivered by Miss Reynolds and brings Peck back to her side.