If you fell in love with action films as a kid growing up in the 70’s and 80’s there’s a good chance you know that what the name Alistair MacLean represented above the title of the film. Action with a capital A accompanied by a usually dynamic cast of tough guys and icons of cinema. Case in point, The Guns of Navarone, Where Eagles Dare and Ice Station Zebra.

Directed and produced by Geoffrey Reeve, this adaptation of MacLean’s 1970 novel was shot in France. It’s pretty to look at it but aside from photogenic leading lady, Charlotte Rampling, the production failed to cast any leading man/men of note. I say this with all due respect to Michael Lonsdale as a shifty businessman who weighs heavily in the plot.

What we do get is an opening sequence in the mountains with a man shot down in an apparent “hit.” The triggerman then coldly turns on his young guide and dispatches him with the same gun. Cut to Miss Rampling, roadside, thumb extended looking to hitch a ride. Along comes the lucky David Birney who has scored the leading man role. Who you ask? David Birney. You know … that guy. The one who appeared on everything from The Love Boat and Cannon to Matlock and Murder, She Wrote.

Did you just say paging Michael Caine or Richard Harris?

With Rampling by his side the pair pull over to assist a motorist at the same time as the hitman and that’s when their lives are going to become entangled in a web of spies and danger. Rampling is a photographer travelling the country with the intention of capturing on camera the gathering of Gypsies in Camargue. When she snaps a picture of our killer she put’s Birney and herself in the line of fire.

Enter Lonsdale as an arrogant S.O.B. He hires Birney to escort Hungarian scientist, Michael Bryant, to safety in New York. From here on in Birney’s to experience multiple near death experiences. He doesn’t know just who to trust and when his new gal pal Miss Rampling is abducted by SPECTRE he’s offered a trade, the scientist for the lady. SPECTRE? Sorry about that I got my movie genres mixed up.

Things don’t quite go as expected and Birney’s everyman must go into his tough guy act. Paging James Coburn! Sorry, can’t help myself but I have zero faith in Mr. Birney, who looks like a game show host on afternoon television, conquering the forces of Blofeld … damn, I mean the bad guys, getting our Hungarian brain to New York and rescuing the damsel in distress. Maybe if I’d seen the international cut at 98 minutes it would have played better than the 84 minute version I picked up recently on bluray from Scorpion Releasing.

Forgettable to say the least, I have no idea if this version of MacLean’s novel stays true to the source material. While it leaves a lot to be desired, the film does offer location filming which leaves me longing for a plane trip to the South of France. Vaccares is directed by Geoffrey Reeve who had previously helmed another MacLean novel, Puppet On a Chain. A film I’ve yet to see so please feel free to voice an opinion on it if you have. Reeve has very few credits to his name, the majority of them from the 1980’s and 90’s as a producer on a handful of Michael Caine titles. I can only assume Caine and Reeve were not yet acquainted in 1974 as this would have been a perfect project for the man who loves to grit his teeth with a jolly old “Bloody Hell.”

Quick. What’s your earliest memory of Charlotte Rampling. For me it’s a trip to the movie theater in 1977 to see Orca. I’ve had a crush on her ever since. A stunning beauty to this day with a long list of credits going back to her film debut as an extra in 1964’s A Hard Day’s Night.

As this was a first time viewing for me, let’s have a look at why I expected a more action packed star studded affair. Alistair MacLean’s name above the title gave me hours of viewing pleasure in my early years of film discovery. The Guns of Navarone probably has the best cast assembled for one of his novel’s adaptations. Peck, Niven, Quinn, Quayle, Papas, Harris, Darren, Scala and some guy named Baker. Or how about Breakheart Pass with Bronson, Crenna, Durning, Lauter, Ireland and Ben Johnson. The list goes on and on. MacLean means star power. Where Eagles Dare with Burton and Eastwood. Bear Island with Sutherland, Widmark, Redgrave. Ice Station Zebra starring Hudson, Borgnine and Brown.

Am I getting through to you?

Which brings us back to Rampling and Birney as the leads in this outing that has an interesting close out in a bullring that could really have used a surer hand in it’s execution. Not having seen the 98 minute version perhaps it’s fleshed out a bit better but I still couldn’t help but think I’d much rather have had a Coburn, Caine or how about a Roy Scheider taking the lead opposite Miss Rampling.

If you do snag the bluray there is an interview with Mr. Birney where he recalls the film and some other career moves including a TV show I’m not familiar with called Bridget Loves Bernie from the 1972-73 season. While he points out he never saw the finished cut of Caravan to Vaccares, he does share that it was very easy to work opposite Miss Rampling and that the director was a humorous, polite man, 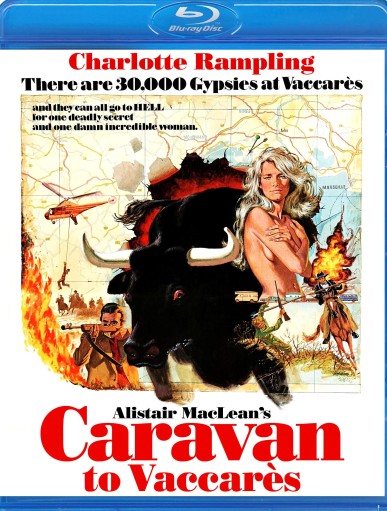