Brando’s Halloween Pick … aka …. Something Is Out There … aka … Future Animals 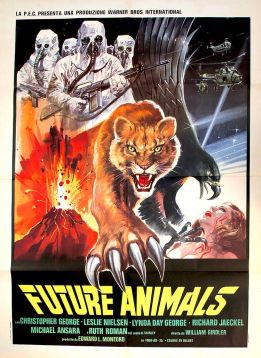 A fine choice from my co-pilot here in the movie room, Brando the Weiner Dog, featuring a strong cast of well known faces from the 70’s battling mother nature, or more specifically, mountain lions, wolves, grizzly bears and most any other living animal in order to survive a nature hike gone bad. Kind of like watching The Towering Inferno to see which celebrity makes the final reel and who doesn’t. Big difference aside from the budget is instead of fire and high-rise falls we get mauled or knocked off cliff tops.

And no Newman or McQueen either in case you were hoping.

William Girdler who had just directed Grizzly to great success, brings along a pair of actors, Christopher George and Richard Jaeckel from that grisly adventure to star in this similarly themed film as well. Somehow he didn’t make it a trifecta by having Andrew Prine join in the fun this time despite his appearing in the previous film. This time out George is playing a mountain guide taking a group of city folk on a survival hike over a two week period. One where they are flown up into the peaks of a California location by chopper to get the nature hike started.

Among our field of hikers that are following George who fits this role to a T are his real life wife, Lynda Day George as a TV personality that will provide a romantic interest for our leading man, Jaeckel as a photographer, Michael Ansara as a Native American wo can sense danger in the air, Andrew Stevens and Kathleen Bracken as a young adventurous couple, Ruth Roman who is totally uneasy on the nature hike with her young son, Paul Mantee as an ex-footballer, Jon Cedar and Mandy Backlinie as a married couple and ….. yes I believe it is, it’s Leslie Nielsen as a rude, arrogant stock broker who will become the film’s major antagonist of the human variety.

With a heavy sun beating down on the mountain peaks there’s a report of ultra violet rays causing wildlife to become abnormally aggressive. What does this all mean to Mandy Backlinie? Well if you know her name at all then you’ll know she’s famous for being the first victim in Jaws and there’s no sense ruining her streak. She’s been earmarked for death from some giant sized buzzards who first attack her leaving her a bloody mess and when our guide, George, thinks it best that Cedar escorts her to a Ranger station, she won’t make it. She’s going to take backwards fall from a high peak after those damned birds get at her again. Paging Alfred Hitchcock!

Now the gloves are off and George with able help and advice from Ansara knows the animals are acting overtly aggressive. He needs to keep the group together and moving down to the community below. Little does he know that the town is being evacuated and men dressed as if they’ve flown in from George Romero’s The Crazies are taking over the city streets. None of this is going to sit well with Leslie who is himself getting aggressive challenging George’s authority as the leader of the pack.

Panic is setting in and Leslie decides he’s heading back up the trail to where a Ranger chopper should be arriving at a checkpoint in a day or so. He attempts to rally the hikers to follow him as opposed to George. Thankfully George gets in one good shot decking the arrogant Leslie before he wanders off with half the hikers thinking he’s their savior. Big mistake! He’s turning as vicious as the wolves that attack in the night and the grizzly that’s been following close behind.

So much so that he’s decided to take Andrew Stevens young wife for his own. Yes Leslie has lost whatever civility he had and seems to be living in a Lord of the Flies domain. Just wait till you see him shirtless deciding he’s more powerful than that big old Grizzly.

Snakes, mountain lions and a vicious pack of German Shepherds are still in the path of the George/Ansara/Jaeckel group as they make their way back to town. How the Nielsen/Stevens/Roman gang make out is going to depend heavily on that Grizzly and if they can rendezvous with the incoming chopper.

Day of the Animals offers a superior cast to make this hiking trip one worth looking out for. It was a staple of late night TV in the early 1980’s that I took in every chance I could get alongside Girdler’s other hit, Grizzly. Didn’t hurt that Jaeckel and George were in both films as I’ve long been a fan of both actors. The pair also appeared together in the Duke’s 1970 oater, Chisum. There’s also a bit of subplot going on here in the town below where we’ll see Walter Barnes as the local Sheriff battling rats as he attempts to get the town evacuated. Barnes had numerous credits to his name though I recall him mainly as a sometime member of Clint Eastwood’s stock company. How about Philo Bedoe vs. Tank Murdoch?

Director Girdler would only helm one more movie before his untimely death at just 30 years of age in a helicopter crash while scouting locations for a new project. His final film proved to be The Manitou that also cast Day of the Animals’ Michael Ansara. He’d also worked perviously with Leslie Nielsen on 1977’s Project : Kill.

And what did Brando the Wiener Dog have to say about Day of the Animals? He felt he’d much rather give nice guy Richard Jaeckel a friendly lick on the cheek as opposed to what those German Shepherds had in mind when they got a hold of him in an abandoned cabin.