Vaudeville mixes with romance and baseball in this lighthearted MGM technicolor feature from director Busby Berkeley that sees Frank Sinatra and Gene Kelly take to the ball diamond while Esther Williams takes the team and a pair of hearts.

Frank and Gene are playing shortstop and second base on the defending champions in the turn of the century while at the same time find themselves enjoying the stage and the “dames.” Right from the opening they throw the title song at the vaudeville audience and by extension us. It’s a rather well known number so unless you’ve been living under a rock or perhaps never been to a major league ballgame your entire life, I’m fairly certain you’ve heard it.

The boys arrive at spring training to great applause from their fellow teammates and third wheel, Jules Munshin, who will join in some of the song and dance routines along the way to the next pennant. Expectations are running high in camp until word comes down that there’s a new team owner who is expected to be very “hands-on” taking all the fun out of the game and off field hijinks. This sets up a great comical gag when Esther arrives by train with no one to meet her. She waltzes into the teams hotel and Kelly goes into his playboy act. He pours out the charm and of course makes derogatory comments about ownership. He’s about to eat his hat and glove when it’s discovered that she’s the new owner.

“If she’s a dame she want’s romance.”

Sinatra is playing the younger innocent as he was likely to do at this juncture in his career and he’s smitten with the new owner when he sees how she can toss a baseball while Kelly is thinking of Esther as more of a notch on his belt after seeing her take a turn in the hotel swimming pool. Esther for her part will look upon Sinatra as a little brother and Gene as the trouble making, skirt chasing star player of the team. But he’s got something going for him and maybe a little kiss at a local dance might help convince her that he’s the one.

Into the story comes a wonderful turn by Betty Garrett who eyes for Sinatra alone. She wants to mother him and he wants little to do with her. That is course till another of those darned kisses to see if she could be the one. The two will engage in some funny comic bits and song and dance routines. Adding some extra plot into the story is Edward Arnold as a shifty gambler who befriends Kelly dangling women and the promise of fame on the stage. His motives are of course to score a heavy bet against the team of Frank, Gene and Esther. He may even have to put Kelly on ice during the big game.

While baseball serves as the backdrop to this engaging musical complimented by train travel and newspapers flashing across the screen to update us on the team’s progress, it’s the dance numbers that are the highlight including O’Brien to Ryan to Goldberg and none so much as when Kelly wows us with a little Irish flavor.

The story is credited to Gene Kelly and Stanley Donen and obviously inspired by the song written by Jack Norworth in 1908. The film was one of two in theaters during the 1949 season to team Frank and Gene. The other being the Kelly-Donen directed On The Town which brought along Betty Garrett and Jules Munshin as well. I couldn’t help but notice the scene when Sinatra finds his baseball card inside a pack of smokes. Today those little cards from the early 1900’s can bring a fortune depending on the name and condition of the card. In the movie he tosses it! 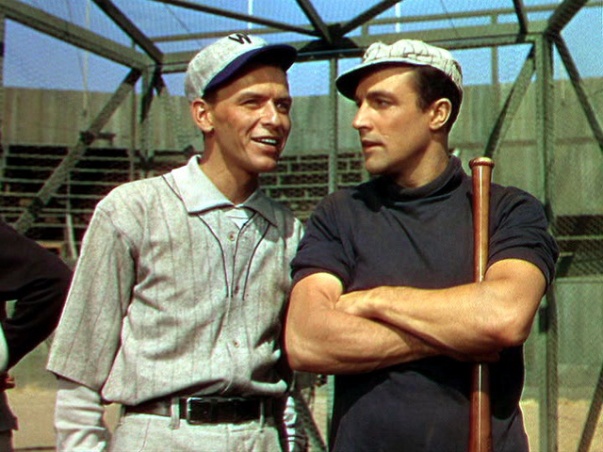 I grabbed this title off the shelf since I’m gearing up for the start of this year’s season. Thought it might be a good fit and why not join me in song by singing aloud the classic chorus with a minor change in lyrics….

Take me out to the ball game,
Take me out with the crowd;
Buy me some peanuts and Cracker Jack,
I don’t care if I never get back.
Let me root, root, root for the Blue Jays,
If they don’t win, it’s a shame.
For it’s one, two, three strikes, you’re out,
At the old ball game.