When a nuclear holocaust is upon us the United States sends select individuals to self contained bunkers in twelve key locations throughout the country. The idea is to keep the human race alive and once the Earth’s surface becomes livable the inhabitants from the bunker will be able to return and begin life anew. Adam and Eve reborn.

Sounds plausible and for my money I’m sure these bunker/homes are out there somewhere though top secret for just such an occasion should the day come that we get real apocalyptic on each other.

Bradford Dillman, Jackie Cooper, Diana Muldaur, Alex Cord, Lance Kilpatrick, Pedro Armendariz Jr. and Barbara Babcock are among our government selected survivors to descend 1758 feet blow the Earth’s crust in a New Mexico bunker that has supplies enough to survive for 5 years. Their new home looks like it’s pure stainless steel that’s guarded over by an on duty Major played by one of my all time favorite character actors, Richard Jaeckel. The luck of the draw has made him a survivor of the nuclear war that has left the surface in flames. He was rotating shifts with another officer and in a moment of grief will hold a photo he keeps in his wallet reminding him of the wife and two children he’s now lost to the war overhead. Had to wonder if the photo is that of Jaeckel’s real life family. If it is then that would make one of the two children in the picture, Barry Jaeckel who would go on to a PGA career with a win at the Tallahassee Open in 1978.

Like Jaeckel, each individual will have to come to grips with just how much they’ve lost. Yet panic and shock must be pushed aside if they are to learn how to live with each other and just how to fully operate their new life sustaining chamber. Dillman as the scientist intends to record a diary to preserve for the future and it’s his narrative that will give the necessary background information on each character and perhaps why they’ve been selected. Cooper a successful businessman, Cord a novelist, Muldaur a member of congress, Kilpatrick an Olympic medalist etc…

Did I mention this is a thriller with horror overtones yet?

Now if I were an actor handed the script to this film directed by Sutton Roley, I’d have reservations about accepting the project. You see the bunker has been built in a deep cavern or cave if you prefer and what lives in a New Mexico cave? How about vampire bats. And they’re getting hungry. The small bird aquarium doesn’t offer the hungry brood enough substance while the human inhabitants of the bunker do. I love vampire movies but bats? The producers would have to have the credited Vampire Bat Consultants and Trainers, Dr. G. Clay Mitchell and William Lopez Forment assure me that I will not be on set at anytime they are getting the bats to perform circus tricks.

No kidding, they really are credited as trainers at the film’s conclusion. 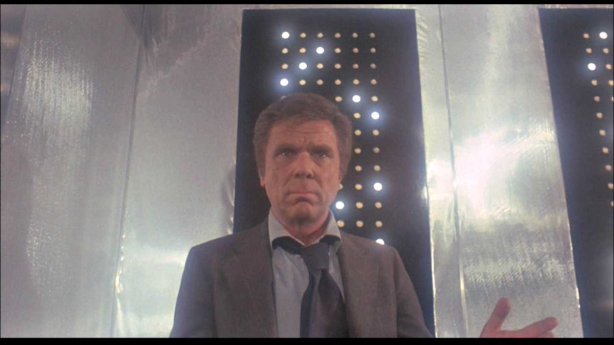 Tears, booze and self pity begin to set in on some of our would be meals and Cooper the worst of the lot. At first he’s attempting to become the alpha male of the group but Jaeckel isn’t backing down. None of this will matter when the group fails to learn just how the bats are getting into their sanctuary and one of their own will be left a bloody pulp with razor like cuts spread out over his/her body. More bloody deaths to follow.

I’m not about to play spoiler with who may live or die. I’ll leave that to you but I am about to divulge a major plot point so skip to the bottom if you’d rather not know …. SPOILER …. that this whole set up is a make believe government experiment with Dillman the only member on the inside who knows it. This leads to a great scene for the one time Golden Globe winner of 1959 for most promising newcomer as he himself comes unhinged at what dangers he and the government have placed upon these innocent people.

With the set up pre-arranged for a 30 day lockdown, help is 25 days away unless the group can figure out a way to climb the elevator shaft to the surface. All the while worrying about being swarmed by the vampire bats. Adds up to one hell of finale to the elevator shaft sequence.

Plenty of live bats are indeed used for the film which must have freaked out some of our ensemble cast caught up in this claustrophobic setting. Jaeckel would find himself in another movie set inside a bunker just three short years later, the superior Robert Aldrich film, Twilight’s Last Gleaming. Like Jaeckel, who played Lee Marvin’s drill sergeant in The Dirty Dozen, the leading set of actors were all well known faces to both movie goers and TV fans. Dillman had been in films since 1958 and scored roles in everything from the original Planet of the Ape films to what seems like every TV series and telefilm made during the 60’s and 70’s. Hard to pick a film or role but cult fans may know him best as the lead actor in 1978’s Piranha. I kind of like his two appearances in the Dirty Harry series as the police chief always at odds with Clint’s Callahan.

Genre fans may recognize Lincoln Kilpatrick from a pair of Chuck Heston titles, The Omega Man and Soylent Green. Cooper goes back to the days of Hal Roach while Miss Babcock sends me back to my memories of the original Star Trek series. So does Diana Muldaur though I remember her best from another Gene Roddenberry production that played network TV often while I was growing up, 1974’s Planet Earth with John Saxon.

I must say that Chosen Survivors also reminds me of a 1987 telefilm called Control. It starred Ben Gazzara, Kate Nelligan and Burt Lancaster. Same idea. A group of people holed up in a man made bunker following a nuclear war minus the vampire bats. Haven’t seen it since it’s TV debut and one of the few Lancaster films not on my shelf.

Kino Lorber released Chosen Survivors on blu ray not too long ago if you’re looking to upgrade from the Midnight Movies 20th Century Fox DVD release as I have.