I love it when I come across old newspaper listings for what was playing at the theater. The ads feature great come on advertising lines and some pretty cool double bills. I came across a cache of newspapers recently at an antique shop and went into my best imitation of Robert Vaughn’s Napoleon Solo as I removed my phone from it’s pocket and quickly snapped some shots of the entertainment pages hoping no one was going to accuse me of loitering. After all, I did buy a couple of small items while looking about.

Anyone up to seeing the latest actor, Jock Mahoney to don the loin cloth circa 1963? As for Dime With a Halo, I’ve never heard of it but will admit to finding leading lady Barbara Luna very attractive. 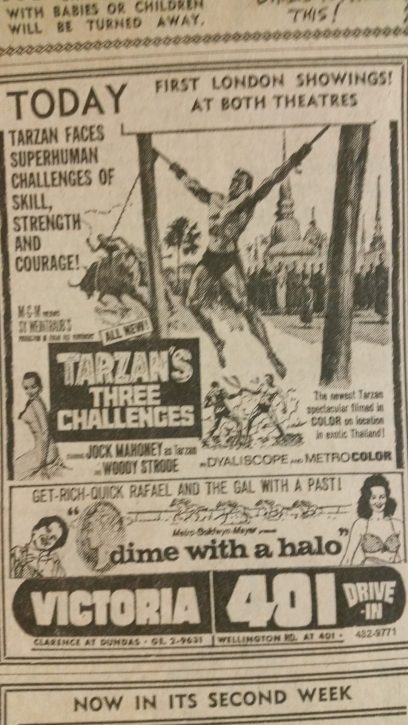 We could head on over to the Odeon to see Cliff Robertson take on the role of J.F.K. in Technicolor no less!

Take the whole family in to see Spencer’s Mountain and leave Dad behind to maybe catch the last night showing of Joanne Woodward as The Stripper.

What to choose? Donald O’Connor? How about that new guy Steve McQueen? Doris Day always entertains. I’ve heard about those Carry On shenanigans from over in England……… nudge, nudge, wink, wink.

We could catch the first showing of the latest Cornel Wilde flick. And hey, isn’t Christine Kaufmann linked to Tony Curtis in the tabloids? Care to tag along? 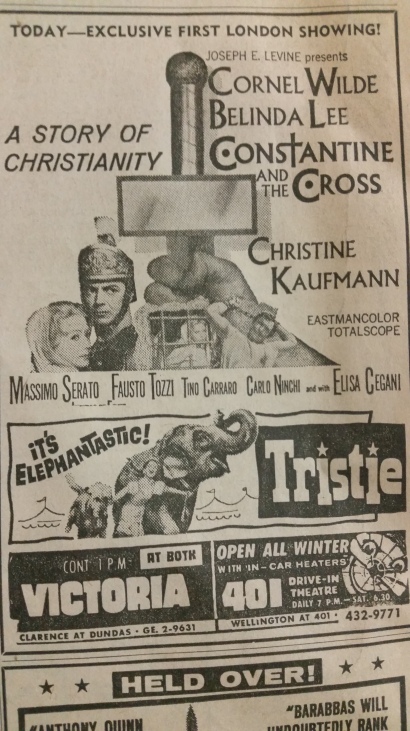 The ultimate Drive-In Double Bill. I’d still pay to see these 1967 classics right now if only our local drive-in would play them.

Take the kiddies or go see this Omar flick where we’re treated to an over the top Palance? We’ve only two days left if we’re gonna go.

While the Kubrick film might be getting all the accolades, I’d much rather go see the war time adventure flick with Burton and that western guy, Clint Eastwood.

Sorry Cliff and Jack, I’d much rather catch the double bill starting tomorrow.

The cast of John Ford’s latest western is just too good to pass on.

How about one of those Sophia – Marcello flicks from overseas?

I’m not so sure I’d really want to sit in the car for a four hour screening of Cleopatra so why don’t we pick one of the other movies to go see.

After hearing so much about those James Bond flicks, Dr. No and From Russia With Love, I think I’ve decided on going to see this new film Goldfinger though I do have a crush on Natalie Wood.

That’s all for this edition of Now Playing. So pick your movie and see you at the box-office.