William Holden won an Oscar for the 1953 film Stalag 17 and in ’54 would star in two films opposite Grace Kelly. This Korean war epic and The Country Girl for which Grace herself would win the coveted Oscar. While she does claim second billing here, this is clearly Holden’s film and Grace’s role is more or lease a cameo.

Aside from Grace this is a predominantly all male cast concerning a group of flyers on board an aircraft carrier commanded by Frederic March.

From a James A. Michener novel, Toko-Ri tells the story of flyer Holden under the command of March who clearly takes an interest in Holden looking upon him as a substitute for the sons he has already lost during WW2. The film opens with Holden having to ditch his jet fighter in the ocean and have the team of Mickey Rooney and Earl Holliman in their rescue chopper fish him out of the freezing waters.

By the time the ship makes port in Japan for some R&R, Grace is waiting for Holden while Mickey and Earl hit the party clubs. It won’t be long before the fiery temper of Mickey gets the two of them in trouble and turning to Holden to bail them out. This leaves Grace in the company of Admiral March who tells of his own family’s plight dealing with death and sorrow and that she needs to prepare herself for what may be the inevitable.

Leaving Grace in Japan the ship sets sail for it’s ultimate goal of sending in a group of fighter planes to take out the targets specified in Toko-Ri. It’s during the build up to the mission that Holden will undergo the tensions and worries that he won’t make it back from what could be called a suicide mission.

Leading the flyers is commander Charles McGraw in what turned out to be a very good role for the long time screen villain with the rock hard voice. McGraw himself will have to learn to hold a firm hand under the command of March and though his role is that of a co-star it’s a solid supporting role for one of my favorite players of the era. 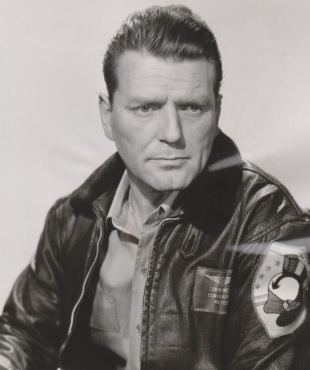 Oscar winning special effects from John P. Fulton are on full display during the climatic air strike scenes when Holden and McGraw make their overhead passes at the bridges needing to be strategically taken out amidst a huge volley of counter fire aimed at the fighter planes. Fulton does a great job at mixing point of view shots, models and the real thing. With all do respect to Eiji Tsuburaya and his model cities for Toho Studios, Fulton outdoes him here.

Along with Fulton we also have Grace Kelly’s gowns designed by legendary Edith Head and the steady hand of Mark Robson directing for Paramount studios.

I first saw this title many years ago and the one thing that always has stayed with me is the Mickey Rooney character. To my best recollection, this was the first time I had seen Mickey Rooney in anything other than a light role of the Andy Hardy type. I bought in to the tough guy Mickey role from there forward.

Also in the cast and under March’s command are Robert Strauss, Dennis Weaver and Willis Bouchey. A solid group of character players that add an honesty to the proceedings.

Don’t usually do this but **Spoiler Alert** in case you haven’t seen this top notch tale of the Korean war.

I find it interesting that in the conclusion of the film, not only do Rooney and Holliman go down fighting but so does our leading man Holden. It’s not the customary happy fade out in the arms of the beautiful woman. Holden knows he’s not coming back and has a sense of doom about him for the majority of the film. The reason I bring this up is that also in 1954 on the production of Apache starring another huge star of the era, the studio stepped in and refused to have Burt Lancaster die at the conclusion opting instead for the unlikely happy ending. This despite Lancaster and director Robert Aldrich wanting to kill Burt off in the final reel. Studios hated to kill off their star players so it’s rather shocking to see Holden’s tragic death on screen.

In 1954 William Holden was one of the biggest cinema stars in the world having  Stalag 17, Sunset Boulevard and Born Yesterday already under his belt. How’s this for a big year, in ’54 he starred in Toko-Ri, Sabrina and The Country Girl. Not a bad trifecta.