Here’s a title that I really had no idea even existed until happening upon a blu ray copy issued forth by Olive Films. It’s a black and white oater from the prolific director Allan Dwan. It actually precedes the “female” western Johnny Guitar by a year. Meaning Audrey Totter and Joan Leslie play it rugged and are really the stars facing off against each other in this Herbert J. Yates release through his Republic Studio Pictures. 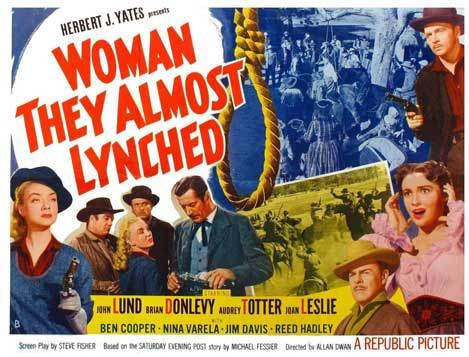 The American Civil war is nearing it’s end and through a montage of clips from other westerns, our plot is set up for a story in the Ozarks. A neutral town run by Nina Varela sees to it that no fighting forces are allowed within the city limits and as Mayor, Nina will hang any wrong doer from either side if given the chance. The town is a neutral one due to the fact that the borderline of the North and South runs right thru it.

When a stagecoach on the trail to town is attacked by a force of Rebel outlaws commanded by the vilified Brian Donlevy starring here as the Southern exile Quantrill at the head of his raiders, they kill the Union soldiers and the stage drivers before running it into town themselves. The one surviving passenger on the stage is Joan Leslie. Befriending her on the final leg of her journey is a young cowboy under Donlevy’s command played by Ben Cooper. Cooper is starring here as the soon to be western legend Jesse James. Also appearing here is Jim Davis as Cole Younger and as Donlevy’s wife, Audrey Totter. 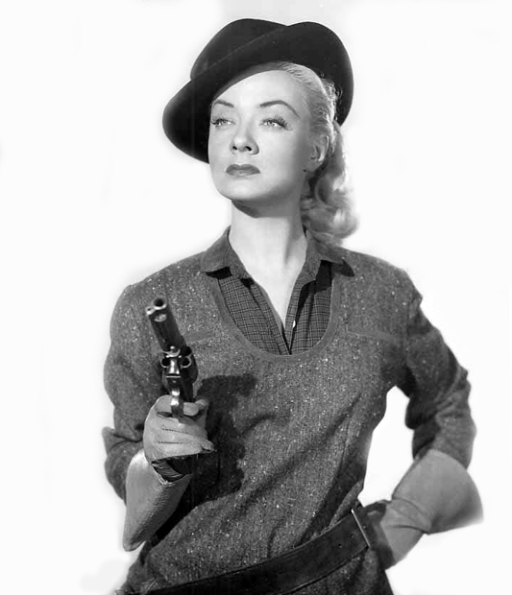 The seemingly gentle Leslie has traveled west to reunite with her brother, Reed Hadley. Injecting some drama into the plot is the fact that Reed was once romantically involved with Totter before she took off with Donlevy. In what amounts to very little screen time, a drunken Hadley behaves like a mad dog when Totter taunts him forcing John Lund to shoot him dead. This suddenly leaves Leslie  alone and the owner of her brother’s saloon. It’s a role she wants nothing to do with but when ostracized by the women of town, she turns her attentions back to the saloon and finds herself toughening up with Lund playing watchdog on her behalf.

Army spies are abound while Donlevy and his troop become a threatening presence in town. While the war time sympathizers choose sides, mean spirited and trail hardened Totter goads Leslie  into a fight only to realize that Leslie isn’t the dainty woman of the east she thought her to be. Not only can Leslie out brawl her, but she can outdraw her as well. The pair will become firm enemies for the balance of this story adapted from a story in the Saturday Evening Post. That is until fate and choosing sides in the war will intervene.

A “B” picture this may be but what surprises here is that the women take the lead roles in what is the focal point of the story. Even having the heavyset Varela as the town Mayor handing out judicial punishment comes as a surprise. A couple other ladies that turn up one may be sure to recognize are Ellen Corby and Virginia Christine.

Playing mostly bad guys over the course of his career, Brian Donlevy is actually cast here for the second time as the Rebel leader, Quantrill. He had just enacted the part in 1950’s Kansas Raiders. In that film it was a young Audie Murphy who starred as Jesse James. Ben Cooper playing the role here had a very Audie Murphy like quality to him as well on screen and would actually go on to star opposite Audie in a pair of sixties oaters as the genre was winding down. Cooper would also play along in the more widely known, Johnny Guitar which might be the quintessential western pitting women at odds.

While billed fourth, Leslie is the real star of the film. She does well as both the gentle newbie to the west and as the firm handed woman with a gun. While looking over her credits it suddenly dawns on me that she played Velma, the object of Bogart’s gentle side in the classic High Sierra. She starred in plenty of Warner’s titles as a contract player including Yankee Doodle Dandy before moving on to television once the medium was underway. Totter is course known by most fans of Noir for her work in the genre. Classic examples include The Set Up, Lady In The Lake and even the “B” flicks such as The FBI Girl. 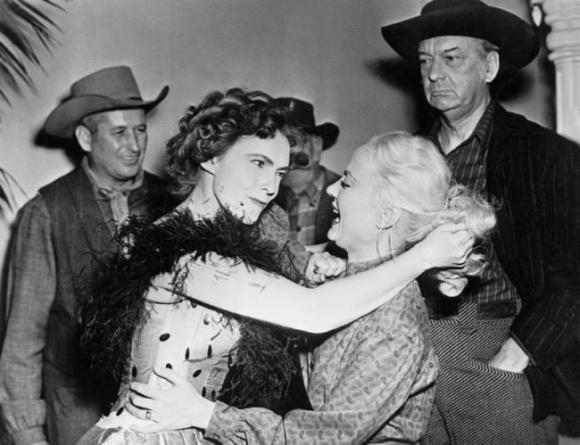 While this may not be the most memorable western one is to see from the decade, it does offer viewers a slightly slanted film in the favor of the female actresses within.