Joining the world of sequels, Charles Bronson, returns to his most famous role of the 1970’s, a time when he was at the height of his box office powers. With this release he brought Paul Kersey back to life. A mild mannered architect and one time conscientious objector during the Korean War. A man who became known to New York City as “The Vigilante” in the original film following the murder of his wife and rape of his daughter at the hands of three hoods. One of whom was Jeff Goldblum making his film debut. 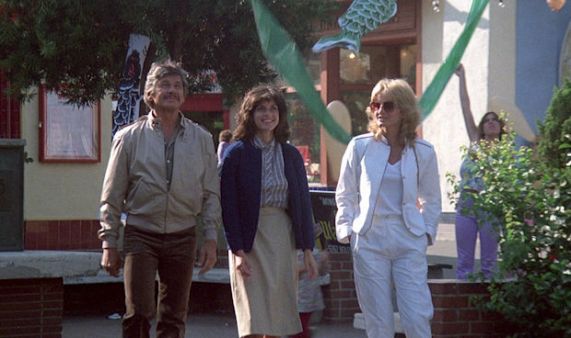 Here we are 8 years later though the film claims the time lapse is both two and four years depending on which scene you’re paying attention to. Bronson has retired from killing muggers and has a new lady in his life played by lovely Jill Ireland. That’s Mrs. Bronson for those who may be unaware. The setting is L.A. where she’s a radio personality addressing the crime rates and how society needs to right itself in order to bring down the statistics. Bronson’s daughter though an adult is still traumatized from the rape of the first film and behaves like a child minus the power of speech while living at a medical center to receive proper care.

Bronson along with Jill and his daughter are enjoying a day in the sun at an open street market when a hint of the violence to come is set in motion. A gang of five street urchins steal his wallet but not before Bronson gets a good look at them all and even smacks one around in an alley before walking away. No he doesn’t pull a gun and shoot down the first mugger on sight. He’s retired but just like an athlete, he’ll be making a comeback very soon.

Perhaps fueled by the controversy involved in 1974’s Death Wish, returning director Michael Winner seemed to have his mind set that he needed to top the gratuitous rape scene of the original in order to send the mild mannered architect into the streets of L.A. on his thirst for revenge in the second of five films in the Death Wish series. With his identification in hand the gang of hoods turn up at Bronson’s house to rape and pillage whatever lies in wait for them. Winner took a lot of heat for the brutality of this scene and I believe rightly so. Even after the sensors trimmed a few seconds here and there it’s still brutal and unnecessary to go as far as he did with the rape and murder of Bronson’s maid. The unedited version that is now available left me stunned as to what Winner had actually filmed.

I’d like to suggest the fast forward button for the squeamish to get on with Bronson doing what he does best. 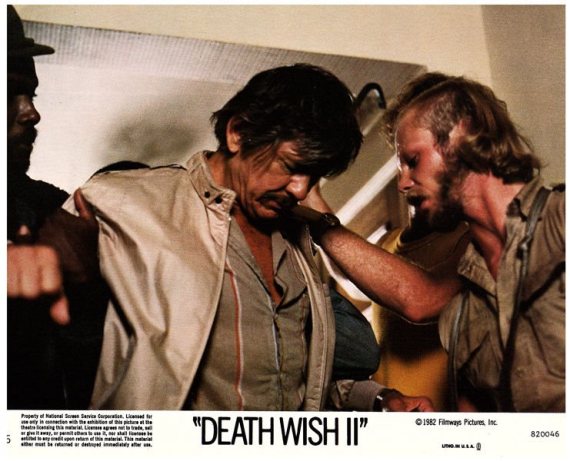 Moving along, Bronson arrives home with his daughter only to be confronted by the hoods. He plays it tough, get’s knocked unconscious and the gang flees with his daughter. Again the poor girl is raped before falling to her death while attempting to escape the gang. Unlike the first film where Bronson has no idea who killed his wife and assaulted his daughter, this time he knows exactly who did and plays it coy with the local police inspector. “It happened so fast.”

A bit of soul searching and chopping wood down by the river at a secluded cottage recalls his entrance as O’Reilly in The Magnificent Seven. The choice is made. Out comes the gun and in one of my personal favorite Bronson looks, he’s back on the street because as the poster states…..

“When murder and rape invade your home and the cops can’t stop. This man will. His way.”

The hunt is on and there’s little time for romance with Jill as she takes a back seat to his finding the five hoods responsible for this latest atrocity on the Kersey name. All of which brings us to prowling the streets and the young toughs who populate the night which in turn brings us to one of the more famous Bronson executions of his long career.

One down and four to go. One of which is a Mr. Laurence Fishburne III according to the credits. Yes that Fishburne. Another targeted killing and police inspector, Ben Frank, is worried there’s a vigilante in the streets as is the Mayor, Anthony Franciosa in a cameo appearance. Paging Vincent Gardenia, New York’s finest. J.D. Cannon, also makes a cameo and sends Gardenia over to L.A. to see if Bronson is “up to his old tricks again.” The worry is that if he’s caught the trail will go right back to NY for letting him go in the first film 2, 4 or 8 years ago depending on the narrative you’re following. 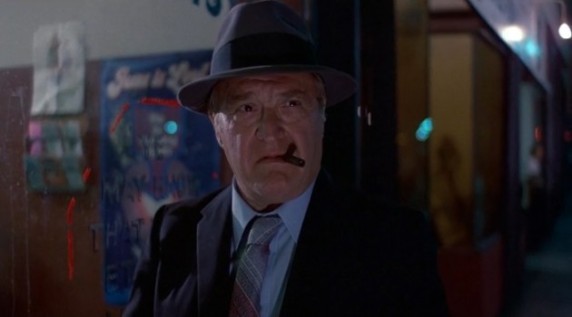 Enough about the plot as it’s meaningless anyway. The whole exercise is to put our man back on the street delivering his unique brand of justice.

Bronson fans love the film, critics hated it at the time of it’s release and probably still do. I’m a Bronson fan and yes I can see all the plot holes as easy as you but to see Bronson kicking ass and taking out the vermin was and still is something I never tire of watching.

With a grinding chainsaw like score from Jimmy Page, the film clocks in at around 90 minutes depending on which cut of the film you’re watching. It was the first film Bronson had made with Winner since the ’74 original. Prior to that they’d had success with Chato’s Land, The Mechanic and The Stone Killer. They’d get together one final time on Death Wish 3 in 1985 before Winner left the series. 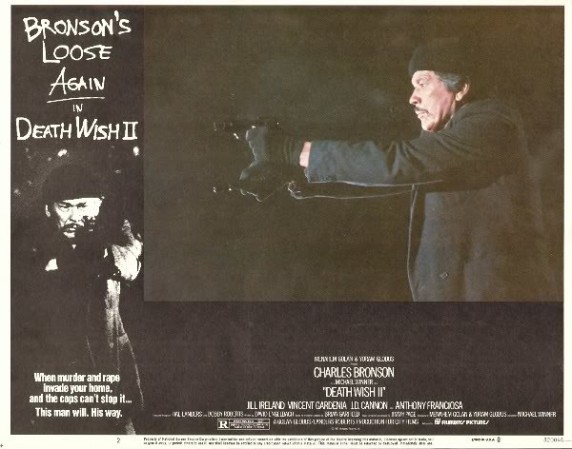 Films resonate with us for different reasons and for me this one always remains in part because it came out when I was an impressionable teen. I was a major Bronson fan thanks to late night movies and couldn’t wait to see this one at the theater. BIG PROBLEM. I wasn’t old enough to get in. Thankfully I have a great drive-in memory to fall back on. My hockey coach/good old boy promised me and two pals that if it turned up at the drive-in he’d sneak us in to see it in the back of a classic 82 van with the carpeted walls and bench in the back. Mission accomplished and unbelievable it was playing with Fulci’s Zombie as the opening feature! A double victory for the kids with no I.D.

Yeah, still got the newspaper clipping. That’s what fans do, we collect trivial things.

We also collect posters. Style A and B wherever possible. 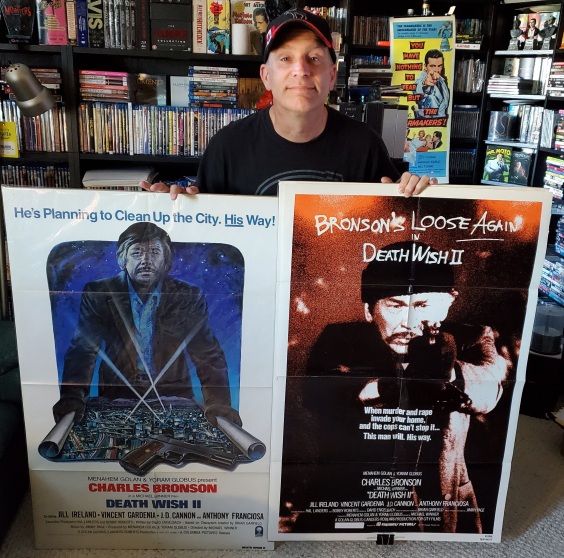 Other bits of non-essential trivia. Jill Ireland who had been married to Bronson since 1968 and a frequent co-star would begin her heroic, well documented battle against breast cancer in the coming years and only make one more film with her leading man in 1987, Assassination, before losing her courageous battle in 1990.

Robert F. Lyons appears in Death Wish II, 10 years after losing out on the Jan-Michael Vincent role opposite Bronson in The Mechanic. He’d return to work with Bronson in 10 to Midnight and Murphy’s Law. This sequel also represents the first time Bronson was appearing in a film backed by Cannon producers, Menahem Golan and Yoran Globus though it’s tagged as a City Films Release. He’d primarily work for Cannon throughout the decade. Lastly, Death Wish II is the final film Bronson made before having some rather obvious work done on his famous mug. He never looked as mean in the years ahead as he did here once the surgeons softened up his rough exterior.

The Death Wish series has long been available on home video so you shouldn’t have much trouble locating this or any of the films in the series if you’re so inclined. Until next time, I’ll let Bronson have the final word…… “Goodbye.”