The second collection of Universal Horrors from Scream Factory proves to be a delicious trio of Lionel Atwill titles accompanied by a fourth that could easily have seen Atwill cast in a role that has been assumed by another specialist in the field of mad scientists, George Zucco. The first Volume the company released to home video was a welcome set of four duets starring Karloff and Lugosi. For more on those selections, follow the links of each title. The Black Cat, The Raven, The Invisible Ray and Black Friday.

On to Atwill and Volume 2 on four separate discs. 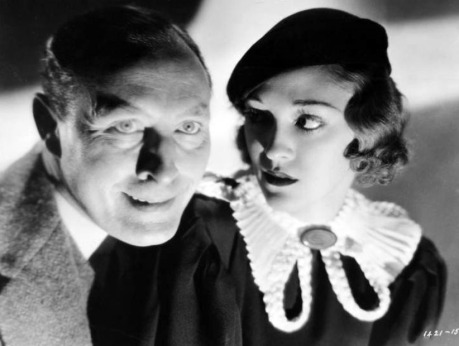 The first title in the set was previously featured at Mike’s Take long before Scream Factory secured the rights to some of these classics in the stable of Universal Horrors. In this case via Paramount thanks to that studio selling off some of their catalog to Universal in 1958. Having seen the film a couple of times in recent memory, I opted to listen in on the first rate commentary supplied by historian Gregory William Mank. Mank has always impressed me with his research into the classic era of horror in both commentaries, books and the many times I’ve seen him at the Monster Bash in Pennsylvania where he often holds court with a slide presentation accompanied by his commentary on subjects including The Colin Clive Story and more recently, The Laird Cregar Story.

Zoo is a great example of pre-code horror with Atwill at his creepiest playing a jealous lover who isn’t above sewing a man’s mouth shut or shockingly feeding a wayward wife to the alligators housed in the zoo. Randolph Scott, Kathleen Burke and Charles Ruggles co-star. For more on the film itself click here to view my “take” on it back in 2014 when I was just getting started with this blog.

This thriller from director Joseph H. Lewis (The Big Combo) is a welcome addition to this second volume from Scream Factory. To the best of my knowledge this is a rare title in the studios horror cycle. Why am I of this opinion? Because I’ve never seen it and that’s rare in itself when it comes to the thrillers the studio put out in it’s glory years.

Now that I’ve got that out of the way, the film is nowhere near what I expected. Mainly because it moves from Market Street to an uncharted island off New Zealand where the bulk of the story takes place. A heavily bearded Atwill who scores second billing to the always daffy Una Merkel plays the title role. In the opening segment, Hardie Albright, walks into his Market Street home as a paid guinea pig for Atwill’s attempts at putting a man into suspended animation. In a fast moving opening, Albright’s wife, Anne Nagel, calls in the police to prevent her hubby from partaking in the experiment.

Too late. Albright’s dead and Atwill is on the run.

Next we see him he’s on a cruise ship minus the beard heading to New Zealand and in a well staged move, throws a police inspector overboard to his death who is on board attempting to discover his true identity. It’s onboard we’ll meet the balance of our leading players. Miss Merkel, her niece and romantic interest, Claire Dodd, her prospective beau, Richard Davies, John Eldridge as an Officer and fighter Nat Pendleton heading to New Zealand for a boxing contest. I mention all these names because when the ship catches fire in a well staged segment all our leading players will find themselves in a lifeboat making their way to that unchartered island that has a tribe of superstitious natives looking to send them all into a fiery pit. 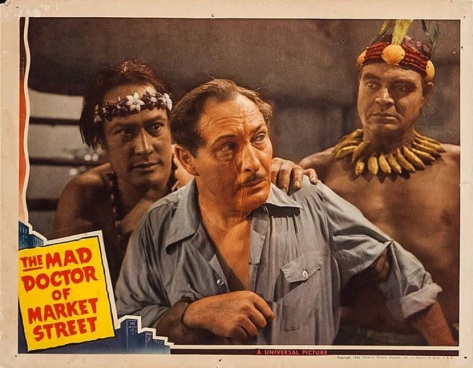 With no Johnny in sight, it’s a good thing Lionel steps forward and saves a native girls life. Yes he’s now a God in the eyes of the primitives and a wanted murderer in the eyes of his fellow castaways. I’ll leave the rest of our story for you to discover on your own.

While Lionel was in fine form through the first two films in the set, the third is less about Lionel than it is about sleuth Patric Knowles and his man servant Mantan Moreland taking a break from the Charlie Chan films in a very similar role.

“Swell night for a murder.”

In this 66 minute mystery, Patric Knowles, is something of a sleuth about town in the mold of a Falcon. While he wants to get out of the mystery business, he’s pulled in by Samuel S. Hinds who is worried about his clients being murdered one by one after he shrewdly gets them off of serious charges in the courts. The results are vigilante justice. He gets them off and the mysterious Dr. Rx wastes little time in killing them.

Not only is Knowles trying to crack the case but he weds Anne Gwynne. I suppose this gives the film a chance at that Thin Man appeal. No such luck but thankfully we have Mantan on hand to supply the pratfalls and wide eyed chills. Better still, he gets Shemp Howard to play off of. Shemp stars as a member of the force always on hand to verbally spar, roll dice and trade jabs with Mantan in between the murders and frights. If you love the Stooges and the Chan films with Mantan as Birmingham Brown then you’re sure to agree that the pair are the film’s highlights.

Hey, didn’t I say Lionel Atwill was in this one too. Well he does turn up sporadically with a set of coke bottle eyeglasses following Knowles rather closely. Could he be Dr. Rx or a red herring? That’s for you to figure out.

As a bonus on this disc, there’s a 20 minute featurette on the life and career of Lionel Atwill narrated by the aforementioned Greg Mank.

Like the previous title in the set, I’d call this one a rare title based on the fact that I had yet to see it previously. Now that I’ve rectified that it’s on to the final film in the set that sees nutty George Zucco stepping into the lab.

One look at Evelyn Ankers and George Zucco’s scientific plans go sideways. That’s the core of this walking dead tale that sees Zucco as a university professor who takes on David Bruce as a protégé and assistant for his experiments into the ancient practice of bringing the dead back to life. The problem is that Zucco sees himself as the perfect mate for Miss Ankers as opposed to Bruce who intends to marry the radio singing star.

Bruce is quickly promoted from assistant to guinea pig. The end result is a walking dead look. But in Jekyll/Hyde fashion, fluids from the heart of the recently dead can revive Bruce to his old self until his next recurrence of a zombie like state. Mutilated corpses are turning up baffling the police detectives assigned to the case, Milburn Stone and in an early role Noir favorite, Charles McGraw, as well as a newspaperman played by King Kong’s Robert Armstrong.

When the murders are thought to be somehow connected to the latest singing tour that Evelyn is travelling, the police are beginning to suspect her pianist, Turhan Bey, as the Mad Ghoul. Unfortunately for the smooth Turhan, he’s about to become the latest target when Zucco learns Ankers intends to marry him instead of Bruce.

This movie proves once again that scientists and women just don’t mix.

Mad Ghoul was released years ago on VHS as part of the Universal Horror line so I had seen this one previously. Alongside Universal Horror regulars, Zucco, Ankers and Bey it has an above average cast from Armstrong and McGraw to Milburn Stone who would score a hit as Doc on Gunsmoke over the course of a 20 year run. As an added bonus on the blu ray disc it has an informative commentary from historian, Thomas Reeder. For more fun with George Zucco in the lab, check out this trio of titles I featured in my Slumming With section.

If you’re a collector like me, then I guess grabbing a copy of this collection should be considered a must. I already have Volume 3 here on the shelf in the movie room and it looks like Volume 4 will be arriving in the not too distant future. 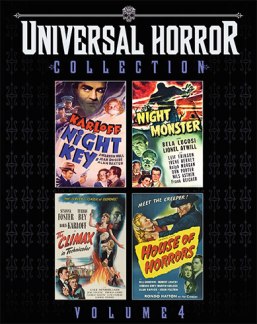