In the latter half of the 1960’s, western genre filmmakers had a definite love affair with the revolutionary era of Mexico. Big scale productions like The Professionals, Villa Rides, The Mercenary and the Peckinpah classic, The Wild Bunch among them. Into this group rides a Tom Gries’ film he directed under the 20th Century Fox banner that includes a standout score from Jerry Goldsmith.

It’s a clash of characters that has explosive results with Jim Brown, Raquel Welch, Burt Reynolds and Fernando Lamas leading the charge. This made in Spain effort opens with Raquel watching spaghetti western favorite Aldo Sambrell hanging her father and dragging her into a railway town where Lamas is a military commander raping and pillaging both the land and the locals,  slaughtering anyone who defies his authority. It’s here that the plot will quickly set it’s stride. Burt is in town bedding a local prostitute played by the exotic Soledad Miranda and he’ll quickly run afoul of Lamas when he sees the commander executing a group of Yaqui Indians.

Burt’s got the mustache firmly in place for this outing and just as Lamas is about to have him put to death Jim Brown turns up claiming he’s a lawman from north of the border looking to take Burt back for a bank robbery that netted him $6000. The money’s missing and Lamas wants to know where it is. As for Big Jim? Lamas isn’t too sure of him either and has the pair of them placed under guard.

The opening stanza of the film ends with Burt escaping with Brown’s blessing as he suspects Lamas won’t hand him over anyway. Brown follows suit on horseback with Lamas’ soldiers not far behind. In a nice bit of stunt work, Burt will ride towards the camera leaning down and picking Raquel up to join him on horseback. When the dust settles we’ll learn that Burt portraying a half breed stole the money to buy 100 rifles for the Yaqui Indians so they’ll be better equipped to fight off Lamas’ army and his military advisor from Germany played by Eric Braeden.

While Burt and Jim may be on opposing sides of the law, they’ll soon find a common enemy in Lamas after he recaptures the pair and assigns them to become the latest targets for his firing squad. Not so fast cause Raquel is a woman of action and has rounded up enough of the Yaqui tribe to rescue the boys before the word “FIRE” is spoken.

‘I want their heads.” 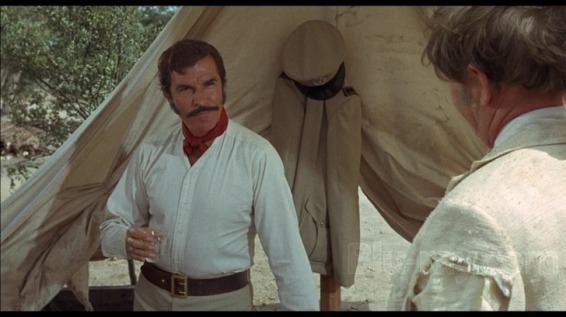 Lamas begins to lose focus on his military assignments and against the advice of Braeden leads his troops to fight for his own personal vengeance. When Lamas orders the slaughter of a village that includes both women and children, Brown begins to see what Burt is fighting against and decides to join in setting aside his warrant for Burt’s arrest. Having signed on to fight the good fight, Brown takes charge and before he knows it is being hailed as a “General” much to his consternation. 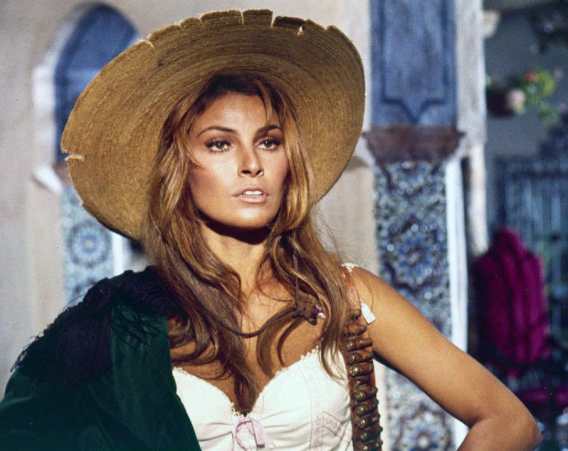 Just four words and the fantasies of damned near every man sitting in movie theaters worldwide in 1969 would have given their right arm to change places with football hall of famer Jim Brown when he takes Raquel into his arms and she makes it plain to him that she’s his woman until he doesn’t want her anymore. So is this the first interracial sex scene in a big budget studio release? I’m not sure anymore but it must rank as one of the first.

No need to go on as I’m sure you all have a good idea who is going to triumph before the credits roll at the 110 minute mark. I should add that while this shouldn’t be called a classic of the western genre there is no denying it’s an explosive action packed adventure. The body count is high and the blood quotient is measured by the bucketful. Burt’s star at this point was on the rise and this role gives him plenty of opportunities to display his athleticism doing numerous stunts caught on a camera that lingers long enough so we can be sure it’s him before the cut.

Jim Brown was on a roll from The Dirty Dozen in 1967 onwards into the early 1970’s when the blaxploitation craze hit and while I’m far too young to have seen him play football, I’ve always been a fan when it comes to his screen presence. Miss Welch was no stranger to the western at this time. She had already appeared in Bandolero, and would move on to play a vengeful gunslinger in the made to order Hannie Caulder. That good looking gal seen with Burt at the opening of the film, Miss Miranda, would go on to great acclaim in the world of cult films starring in some Jess Franco “classics” before a sad untimely death at just 27 years of age in an automobile accident in 1970.

If you’ve seen the 1968 sci-fi classic Planet of the Apes as often as I have then without even looking at the credits you’ll know they were both scored by the same composer. In this case Jerry Goldsmith. There are more than a few notes and musical cues that had me thinking I was watching Chuck Heston causing havoc in Ape City.

For those who might be keeping score this was the first of three films that Burt and Raquel appeared in together. The others being 1972’s Fuzz and 2006’s Forget About It. For my money 100 Rifles is easily the best of the three. Director Tom Gries who also had a hand in the screenplay of 100 Rifles cut his teeth in series television before moving into features. Among his titles are the westerns Will Penny and Breakheart Pass.

This western actioner is easy to locate if you’re so inclined. It was recently put out on blu ray from Kino Lorber for us fans of westerns and the leading players. Lastly can you spot the difference in the advertising campaigns between the North American release and the one in Italy.