This 1940 thriller represents the final pairing under the roof of Universal Studios where it all began for the legendary horror stars, Boris Karloff and Bela Lugosi. For fans of the duo it’s a rather touchy topic. Did Boris go out of his way to upstage Bela this time around after Bela seemed to have gotten the better of him in The Son Of Frankenstein as the scene stealing Igor? I’d like to think not but either way what was the studio thinking putting the pair together in the latest brain transplant thriller without ever once having them share a scene together? 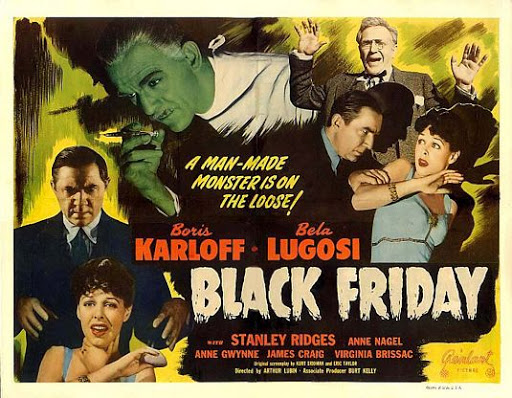 Directed by Arthur Lubin, Black Friday, opens with Boris on his way to the electric chair. Led down the corridor alongside a priest and the guards as if he were Jimmy Cagney’s Rocky Sullivan. He’ll pause briefly and hand his scientific notes to a kindly reporter which will allow the script to launch into a flashback that will bring us all up to speed on just how the kindly Boris ended up in the gallows.

“I go to my death as a scientist leaving this record with the hope that it will benefit mankind.”

The lead character of the film, Professor Kingsley, as played by Stanley Ridges is promptly introduced. The kindly old timer is about to find himself in the middle of a gangland shootout resulting in his being run down by a speeding getaway car maneuvering through a hail of bullets. Inside the getaway car are a quartet of thugs played by Paul Fix, Edmund MacDonald, an unbilled/unrecognizable Raymond Bailey (according to Greg Mank’s splendid book on Boris and Bela) and Bela Lugosi! Yes Bela has been cast as the ringleader in this gang of hoods who have left gangster Red Canyon for dead. Karloff as the Professor’s friend sees the carnage and makes the ride to the hospital in the back of the ambulance with the near death Professor and the badly injured gangster.

It’s a good thing Boris has been working on transplanting the brains of animals cause his technique is going to come in handy in order to save the body of Kingsley. But much like Colin Clive in the James Whale classic, Frankenstein, of 1931, Boris picks a poor donor splicing parts of the gangster’s brain into the body and brain of his dear friend. Hopefully not without recompense. You see Boris discovers that the gangster Red Canyon has half a million dollars tucked away and begins to dream big. Perhaps he can awaken that half of the brain to aid in locating the cash.

It’s risky business and in the end Boris creates a version of Jekyll and Hyde he can call his very own.

I guess this is as good a time as any to point out to those unware that Boris was originally cast in the Ridges role playing the tormented Professor who occasionally slips into a Bogart like tough talking hood seeking revenge on those who left him for dead and are seeking to steal his loot. Damn! This sounds like Lee Marvin in Point Blank. As for “Poor Bela” he was to play the scientist conducting the transplant. Thus we would have had plenty of Boris and Bela scenes together. As it is Bela got moved down a notch to the chief hood with very little screen time.

Now back to our regular programming…..

Since gangsters like to hang out in nightclubs, that’s where we’ll find Bela and the boys as well as the one time girl of Red Canyon’s played by Anne Nagel. Perhaps Paul Fix can take the place of her former lover. Then again he might just wind up dead. Yes the former gang of Red Canyon’s are ending up splashed across the newspapers following their violent deaths. Karloff it seems has created a monster. With a Svengali like presence Boris seeks to tame Ridges before he himself is implicated for his illegal brain transplant and as an accessory to the gangland murders. If he could just get the money by taking the Professor to all of Red Canyon’s old hangouts to jog the memory of his stitched together brain. 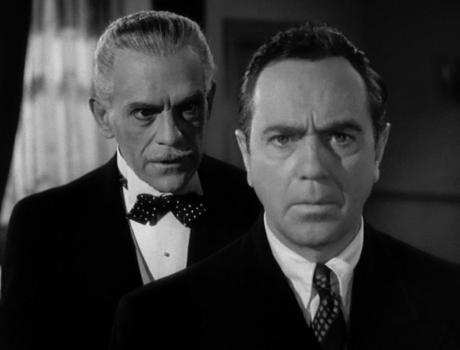 Brain transplants, gangsters, gun molls and Anne Gwynne. Yes she’s in here too as Karloff’s daughter. Classic horror fans will recall her from a number of Universal Productions including a reteaming with Bela in the 1941 version of The Black Cat and then later on with Boris in the entertaining monster rally, The House of Frankenstein. She’d even get to appear with that other studio star of horror, Lon Chaney Jr. in the Inner Sanctum mystery, Weird Woman.

As is the case with Dr. Jekyll losing the battle to his alter ego, Ridges too is going to end the film having lost his gentle side becoming a bona fide gangland killer. A quick wrap up and we’re back to the gallows with Boris and his executioner.

From the pen of Curt Siodmak, this proved to be the weakest of the official Lugosi-Karloff pairings at Universal. Those films were The Black Cat (1934), The Raven (1935), The Invisible Ray (1936) and The Son of Frankenstein (1938). They had turned up in cameos for the 1934 film Gift of Gab and following Black Friday would appear in RKO’s You’ll Find Out the same year and one last time in the film I believe to feature Karloff’s greatest performance, The Body Snatcher (1945).

Fans of the Universal Horror cycle will undoubtedly recognize the musical score that the studio recycled in many of it’s 1940’s horror projects. Director Lubin would move on to helm a number of Abbott and Costello features as well as the Claude Rains version of The Phantom of the Opera and a number of Universal-International films of 1950’s before moving on to television.

Needless to say this is a must see for the classic horror fan even if it is somewhat of a disappointment when compared to the earlier pairings of Boris and Bela. It’s been included in the must have Universal Horror Collection Volume 1 on blu ray from Scream Factory with plenty of bonus features making it a must have for fans just like me.

I’ll leave you with this. Would you believe that the early working title on the production of Black Friday was ….. Friday the 13th. Doesn’t much sound like a catchy title to me. What do you think?

On second thought, I’ll leave you with this. 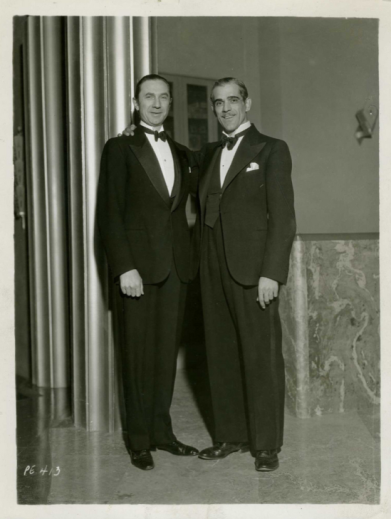