I’m not sure just how intimidating this movie’s “pack” would be if Brando the Dachshund was a member but as it is, Joe Don Baker and company have their hands full when attacked on an isolated island by a pack of rabid and hungry wild dogs.

In the shadow of that “shark” thriller comes another movie that pits man against one of nature’s other species. In this case it’s man’s best friend and the attacks begin immediately when a horse is seen grazing in the morning sunlight. Not for long as the dogs move in for the kill.

Baker is a marine biologist (paging Richard Dreyfuss?) who along with his wife, Hope-Alexander Willis, are playing out their very own Mr. Blandings Builds His Dream House with their two young sons on an island that sees few visitors other than cottagers out to party and fish. Surprisingly it’s not a group of teenagers headed to the island with old timer R.G. Armstrong but a group of middle aged folks including Richard B. Shull and Bibi Besch. When Baker sees a vicious dog that is too far gone at the local dump and the his sons finds the carcass of a half eaten horse, he’s firmly keeping the boys close to the house and loads his shotgun to put the rabid dog down.

He warns Armstrong and company of a wild dog but before he can find and kill it a local blind hermit and his own dog are attacked, mauled and killed by the pack of various breeds including a Dalmatian I caught sight of. One of the film’s more terrifying encounters follows the next day when Baker’s wife is nearly caught by the pack before taking refuge in her car. That doesn’t stop the dogs as the vehicle is a soft top and gnashing teeth and fangs begin to tear away at the roof. Thankfully Baker hears the horn and comes running with a rifle. Now he knows there’s way more than one rabid dog. 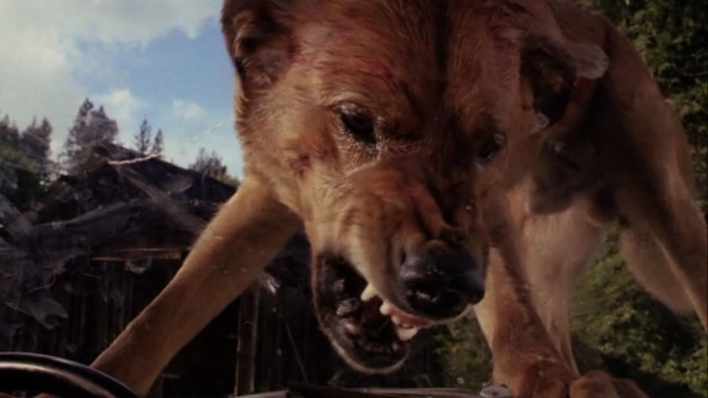 By the time he gets back to the cottagers two more victims are going to meet a grizzly demise. With a power outage on the island and cell phones yet to be realized, the survivors are going to take refuge holed up together to do battle with man’s best friends who have gone bad. It’s a real live Night of the Living Dogs. Thankfully there’s a collie amongst them who will give us all hope at the fadeout.

The Pack was one of many nature strikes back flicks of the era. The Bees, The Swarm, Dogs, Day of the Animals, Orca, Grizzly etc. As is the case with most of these efforts, there’s usually a well known face cast in the lead and Joe Don Baker was just that during the 1970’s with the hit Walking Tall and other crime dramas under his belt. R. G. Armstrong is always a welcome presence in any movie and can be considered a member of the Sam Peckinpah stock company which puts him high on my list of favorite character players. He’d also appear in The Car this same year. Another film that tips it’s hat towards Jaws. 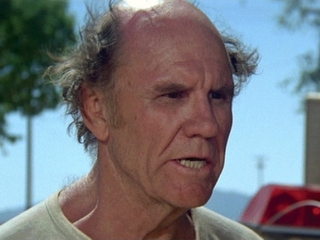 Serving as writer – director is Robert Clouse. Forever identified as the director of Enter The Dragon, Clouse would also helm Deadly Eyes in 1982 that saw man facing off against killer rats as opposed to dogs. This proved to be an efficient drive in feature but I’ll admit to liking many of those other man vs. nature films a bit more than this one. While little Brando hasn’t seen all those other thrillers (he’s only 7 months old) I did notice him paying close attention to the screen with all that barking, howling and in one particular case crying but considering all those dogs in the movie were a might larger than him, I’m not sure they wouldn’t have turned on the little guy like him if given the chance. For that reason I don’t think Brando would recommend this one to the four legged pals he’ll be meeting at Wiener Fest this summer.

Once seeing the film released on DVD by the Warner Archive Collection you too will know how tough guy Joe Don Baker handle’s a pack of wild dogs. But what if he’d been set upon by a pack of tail wagging black and tan Dachshunds named Brando?