Joining in on a celebration of pre-code titles I chose the first two films of the Edgar Rice Burroughs series that featured Johnny Weissmuller and Maureen O`Sullivan in the famed roles of Tarzan and Jane. The reason is very simple. Long before I knew anything about what a pre-code title meant I would watch these films with my Father on a Sunday afternoon and from then on I was hooked on the storied adventures of the jungle man in both film and comics that I would occasionally receive from Mom.

The love story of Tarzan and Jane has become an easy target for parody. Me Tarzan! You Jane! I won`t dwell too much on the plot of the first in the series of 12 films that Weissmuller starred in from 1932 until 1948. It`s essentially a safari led by C. Aubrey Smith whose daughter O`Sullivan comes along. They encounter the famed white man who lives with the apes. Jane is literally swept off her feet and pulled up to the tree tops where she finds love and romance with the true King of the jungle.

The fun of this viewing was looking for the clips that would never make it past the sensors and guardians of `the code` once it was put in place. Near the start of the film O`Sullivan removes her dress in the presence of her father giving us a look at her silky slip and a fair bit of cleavage. There`s a harrowing river crossing where the members of the safari are subjected to some vicious attacks from both hippos and gators. Men die brutally in the jaws of the large predators.

By the time Weissmuller arrives at the half hour mark he has Jane firmly in his sights and she soon finds herself in an uncompromising situation in his tree top love nest. Weissmuller`s intentions are not yet known and the crazy look in his eyes has O`Sullivan screaming at the impending rape she believes is about to take place as her struggles with the jungle man are of little consequence.

It won`t be long before she sees the gentle yet playful side of the man-child. What better place to frolic with Weissmuller`s Tarzan than in the water where the real life Olympic swimming champion first made headlines. It`s this scene in the water that cements the sexual union that will take place and when he carries her off it leaves little doubt.

There`ll be plenty of excitement down the stretch as Tarzan must rescue the fair lady and the safari members from the clutches of an evil tribe that plays out in a very violent confrontation between man and beast. Rampaging elephants, a giant gorilla and a healthy dose of Cheetah the Chimp. As a kid watching these films it was Cheetah that gave us the comedy bits that offset the drama and heroics within. To this day if you show me a chimpanzee, I`ll laugh at any antics he/she may display and out of perhaps nostalgia refer to the chimp as Cheetah.

The first film of the series was directed by MGM house director W.S. Van Dyke and proved to be a huge success which of course demanded a sequel. This time Cedric Gibbons was behind the camera for the continuation two years later.

The second film begins with safari survivor from the first film Neil Hamilton returning to the deep jungle with fortune hunter Paul Cavanagh in tow. They`re hoping to bring back a fortune in ivory with the help of O`Sullivan`s Jane. Hamilton himself is hoping to persuade O`Sullivan to return to civilization as well after a year living with savages. If you`re at all familiar with the formula of the Tarzan series then you should know that great white hunters are never to be trusted. They`ll kill and maim for their own gain or pleasure. 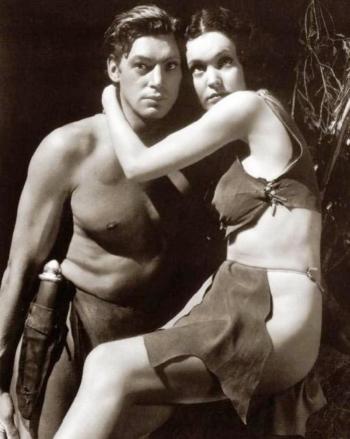 This was the second and last MGM Tarzan film made before the code would change a few things in the series. Most notably the flimsy open at the hip two piece leather bathing suit that O`Sullivan wears that clearly allows us to see her navel. There`s even a side shot of a nude Cavanagh climbing into a water tub early on in the film.

When our latest safari begins the trek into the jungles they are following an earlier expedition that they soon learn has been wiped out by a tribe of cannibals. This sets the scene for some bloody corpses and battle scenes that are sure to be toned down upon the films re-release in the future.

The films biggest pre-code scene is the infamous nude swimming scene between our jungle lovers. Weissmuller keeps his loin cloth but it`s O`Sullivan`s double who is clearly topless in the restored version of the film released in the Warner Brothers collection set. I`m not quite sure but I believe she may have been wearing a flesh colored body suit for the lower regions. The first time I saw this clip upon the DVD`s release and restoration was quite startling as it`s not the kind of scene one expects from the glory years of MGM, the home of more stars than there are in the heavens.

Exiting the water O`Sullivan must contend with Cheetah who has run off with her dress that was a gift from Mr. Hamilton in his bid to capture her heart. `Cheetah can`t you see I`ve got nothing on,`she tells my favorite chimp to confirm what we just saw in the water.

This film offers far more in terms of daring adventure for the viewer then it`s predecessor. Weissmuller must rescue his beloved from a succession of dangers including a stampeding Rhino and an alligator which allows us to see one of the famed gator/Tarzan confrontations. When our unsavory safari members are cornered by a pack of lions for the climatic finish we`ll see Weissmuller prove his metal against the large cats to stake his claim as the undeniable King of the Jungle.

A good deal of the fun for me on these films is the interaction between the stars and the animals. Be it Cheetah the chimp or the elephants helping out at various times fighting evil or just helping around the tree top fortress that becomes a regular part of the sets in later films. Both Johnny and Maureen seem to naturally take a liking to the animals with no hint of fear.

Weissmuller and O`Sullivan would soon welcome Johnny Sheffield into the family and become  a jungle variation on the Andy Hardy films. When O`Sullivan left the series after six films producer Sol Lesser would move Weissmuller and company to RKO for six more adventures. Johnny would retire from the role after 1948`s Tarzan and the Mermaids and would move on to the Jungle Jim series while Lex Barker would take over loin cloth duties as Tarzan.

The Tarzan series offers grand adventures for young and old. It wasn`t to long ago that like my father before me I went through the twelve films with my number two son Kirk and perhaps he`ll do the same some day.

This pre-code focus on the first two Johnny Weissmuller Tarzan films is in celebration of the blogathon hosted by Danny of Pre-Code.com and Karen of Shadows and Satin.