I’ve always been aware of this movie about the world’s first penis transplant and that’s because I know my parents watched it years ago on our local CITY TV out of Toronto. If not this one than maybe it was the sequel, Percy’s Progress. I of course was too young to watch but like most any youngster, I listened in to my parents discuss the plot with friends and the laughs that followed. So I’ve never really forgotten the film and it’s subject matter, it’s just taken me years to finally see it for the first time.

Aside from some brief nudity and a sexy dance, I probably could have cared less if they had let me watch it back in the day when Carry On movies and other English shows like Some Mothers Do ‘Ave ‘Em populated the airwaves here in Canada on a frequent basis.

As we’re talking about the first penis transplant via the good doctor and scene stealer extraordinaire, Denholm Elliott, I can’t help but want to throw this quote in from the hilarious 1981 film, Porky’s, “Please, please can we call it a “tallywhacker”? Penis is so ppp… penis is so personal.”

Elliott is looking for both a donor and a recipient in his quest for the experimental surgery he intends to make all the rage. Luck shines on him when an apparently well endowed lover makes the mistake of leaving Elke Sommer’s room via the window forgetting she’s high up in an apartment building as he flees her returning husband. He lands on an unsuspecting Hywell Bennett below resulting in some serious damage to Bennett’s nether regions. Fortunately Elke’s lover isn’t maimed where it counts and Denholm has the two men he needs to carry on like a pornographic Dr. Frankenstein. Take one look at the set decorations that surround Elliott in his office and you’ll understand his fixation on the male sex organ. It’s a hoot.

Hywell is going to awaken only to soon learn he’s got a new …….. “tallywhacker” that the medical staff has dubbed Percy. Before Elliott is to go public he needs to ensure that Percy is a perfectly functioning sex organ and so begins the fantasy of the stripper turned nurse to see if a “rise” can be gotten out of Hywell and Percy. When the public does get wind of the story and just who the recipient is, Hywell would much rather do without the his 15 minutes of fame.

“I could re-equip the British Navy.” Elliott proudly proclaims before his nurse shoots him down with her negative response, “It’s balls they need.” 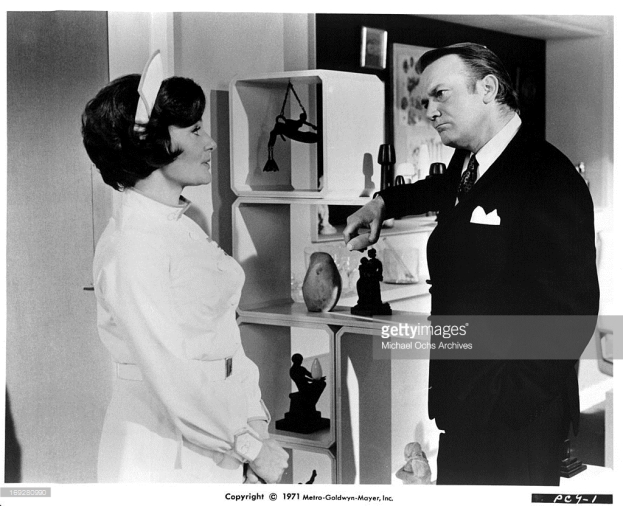 From here I must admit the film is no where as bawdy as I anticipated but actually turns more to drama than laughs as Bennett becomes obsessed with discovering who his donor actually is. Or rather where he’s been might be a better statement. When he thinks he discovers who the donor was he hits on a succession of the dead man’s lovers to see if they’d be willing to confirm his suspicions. As I type this plot out I can’t help but think this must have been a hilarious adventure but to be honest, it’s not all that funny past the first half hour. Even with Britt Ekland making an appearance as one of the jilted lovers who almost confirms Bennett’s suspicions. I guess I expected a more laugh out loud farce than I got. Perhaps if I ever get a copy of the sequel, it’ll strike me as being funnier.

Not surprisingly the film was directed by Ralph Thomas who’s brother Gerald helmed the vast majority of the Carry On features. Perhaps Ralph was trying to get in on the act with a risqué feature after having worked on a large number of Dirk Bogarde movies with his long time producer Betty E. Box who is credited on this comedy venture as well. The soundtrack featured a couple songs even this notorious country boy recognized from The Kinks.

No where near as vulgar or risqué as today’s output of sex comedies, this one is a window to the past when a good number of sexually motivated comedies were coming out of the British film industry. Harmless fun that can still bring a smile at a few key moments in the proceedings with numerous double entendre lines such as when the nurse points out to Bennett concerning his new member…………..