Ali Baba takes us into the beautiful world of Technicolor joined with the on screen adventures and romantic escapades of Jon Hall and Maria Montez. All brought to us in a splendid production via Universal Studios.

The mysterious world of Baghdad is the backdrop for this tale of betrayal, love and heroic deeds. When the Jon Hall character is but a child, he pledges his love to the young actress portraying the Montez character on the eve of his father, the Caliph’s murder. The Mongols have invaded the city and have put to death those who would oppose them. All those except Montez’ father who proves to be the traitor amidst the Caliph’s inner circle.

The young boy is swept down river and flees for his safety. Soon to be christened Ali Baba, the youngster happens across the famed forty thieves as they ride from the walls of a stone cliff which magically close behind them. The boy discovers the secret that allows him to enter and when he is found inside he becomes an adopted member of the troop who will grow up to become it’s leader.

Comparisons to Robin Hood and his Merry Men may now commence.

Hall becomes the wanted leader of the band with a price on his head. His men rob from the rich and give to the poor as they so clearly state in song riding and singing through the harsh rocky terrain that I am sure was used for many a western stagecoach robberies. Hall is soon to meet the beautiful Montez and her caravan. She is headed to Baghdad where she will become the Queen to the Mongol leader. At this point Hall has no idea she is the little girl from so long ago. While flirting with the beauty he finds himself trapped and imprisoned.

Looks like Andy Devine as his personal handler among the forty will have to round up the troops and save his ward.

Much like Errol Flynn’s Robin who steals away Miss Olivia’s Maid Marion, Hall grabs on to Montez as he rides to safety with his beautiful hostage in tow. He will soon learn that she may not be as evil as he initially suspected and the two will soon learn their true identities. Wonder where that will lead us? 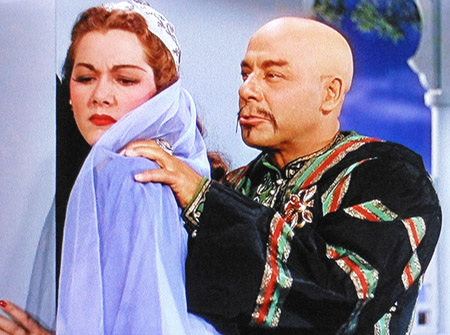 The whole tale will culminate with Hall attempting to stop the wedding of his beautiful Montez to evil Kurt Katch, the Mongol ruler. To do so he will have to count heavily on Devine and Montez’ personal servant, Turhan Bey. Billed above the title and in third position, Bey was at this time a familiar face at Universal appearing in various titles including The Mummy’s Tomb, The Mad Ghoul and an earlier Hall-Montez colorama, Arabian Nights.

While it’s easy to compare this and call it a Robin Hood knock off, I am quite sure that the audience it was aimed at in the 1940’s ate it up. The fact that Universal filmed the Hall-Montez flicks in lavish color is an added bonus to the heroics and adventures that the scriptwriters put into the plots. This one was directed by journeyman Arthur Lubin and features Jack Pierce’s name as the make-up artist involved though it’s not of the Universal Monster variety that Jack’s name is synonymous with.

Way down the credits list billed as the dialogue coach is Stacy Keach Sr. Yes indeed, father of long time actor Stacy Keach of film and television’s Mike Hammer during the 1980’s.

In the end, this Ali Baba adventure offers old fashioned entertainment that fueled the minds of boys like Steven Spielberg who would grow up to be the next generation of film makers, inspiring them to create magic of there own on screen with characters like Indiana Jones.