It’s that time when Kristina of the Speakeasy site tosses some titles my way in her efforts to introduce me to some movies I haven’t yet seen which in turn has led me to this beautifully photographed Alain Delon starring effort from director Rene Clement.

Delon and Maurice Ronet appear to be two young men living it up in Rome. Carefree, drinking and chasing women. Surprisingly, I thought for just an instant that the two were about to enter into a night of lovemaking with an attractive blonde they pick up while carrying on into the night. A three way sexual interlude is something we’re not likely to see in a Hollywood film of 1960. It doesn’t quite work out that way as the two move on but there’s an edginess creeping into the film thanks to the Delon character. He seems to be plotting something and openly begs Ronet to return with him to San Francisco on the pretext that he’s been sent over by Ronet’s father to bring him home for a bounty.

Ronet is engaged to Marie Laforet and along with Delon, the trio take to the sea on Ronet’s schooner. A verbal game of cat and mouse is slowly developing between the two men and when Ronet tells his betrothed that he has no idea who Delon actually is, the viewing audiences eye brows are sure to narrow as they contemplate where this is headed. The smooth Delon who clearly has calculated a plan, sees to it that Marie and Ronet find themselves in a lover’s spat with her being put ashore while Delon and Ronet head back to the open waters in a wonderfully filmed segment of the film.

This is the second film that Kristina has assigned me to feature Mr. Ronet. The other being another top notch thriller, Elevator to the Gallows that I’d easily recommend.

I guess it’s at this point that I either tell you a major plot development or pretty much end the details right now. There’s still a good hour to go in the film by this point and the cat and mouse game between the two is about to come to an abrupt end which will only lead to our icon of French cinema, Delon beginning the game anew with various other characters that are to be introduced as the film continues.

The version I watched of this film is the DVD that was issued by Criterion and while the film is in French, I’ve never been one to worry about reading the subtitles. Clement’s film is easy to follow and while it may be subtitled, I was enthralled at the plot and never found myself lost. I say this knowing that plenty of my friends and associates who know I’m a self appointed film buff, tell me they could never watch a foreign film as they can’t get past reading the dialogue as the movie goes along. I for one have always found it a fairly easy venture. Tunnel vision has always been the perfect saying for me when describing to others how I can watch a subtitled film while at the same time encouraging them to try the same.

For the uninitiated, Delon is playing Tom Ripley. A character that has seen more than one film project wrapped around him. Matt Damon took on the role in 1999’s The Talented Mr. Ripley that featured Jude Law in the Ronet part. Alain Delon is in nearly every scene for the entire 118 minute running time and it’s not hard to see just how he became an international star of the screen, much to the delight of women everywhere or so I’ve been led to believe from the history books on film.

Delon has always been in my movie watching world from a very young age. Primarily because he starred opposite my favorite tough guy while I was growing up, Charles Bronson in a pair of films. Farewell Friend and Red Sun. The latter a very entertaining western that I always recommend.

I’ve really kept a lid on the plot points this time out as I’m not into playing spoiler and this one leaves me little to chat about without unveiling far too much of the twisting plot so seek this one out and enjoy. Like me, discover it of you haven’t seen it and if you are unfamiliar with Alain Delon, hopefully this might lead you to check out more of his films, both foreign and some of the English language ones he made like Scorpio opposite Burt Lancaster. He also appeared opposite Burt in the highly praised The Leopard. Visconti’s epic of 1963. 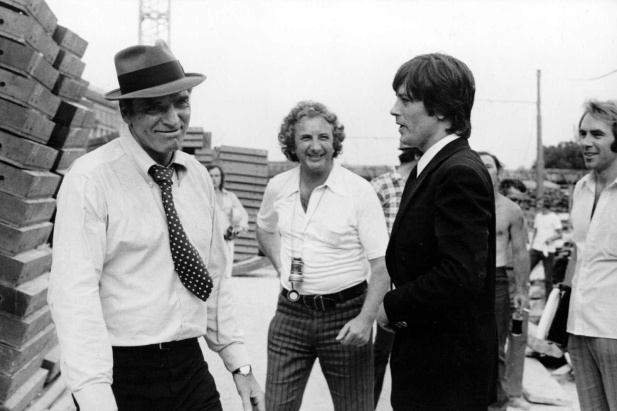 As is the custom with the Mad Movie Challenge, you now need to click right here to see what film I’ve assigned Kristina to watch for the first time. Her assignment stars one of my favorite actors who won two Oscars during the early 1950’s in supporting roles but really hit his stride in the late 50’s and 60’s as an in demand leading man. It’s a cheeky war time tale where the star I am speaking of shines brightly.