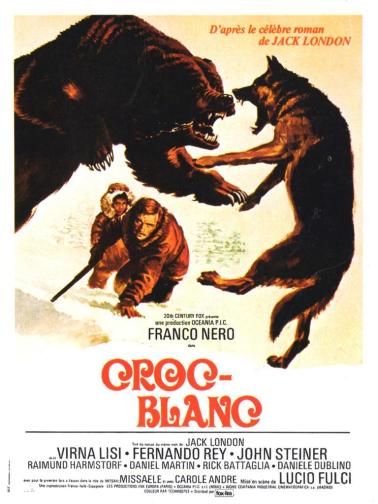 Care to guess who directed this big screen adaptation of the classic Jack London tale first published in 1906?

If you said gross out horror maestro, Lucio Fulci, you’d be correct. And please put that answer in the form of a jeopardy like question. “Who is Lucio Fulci.”

Now add in the prolific low budget specialist Harry Alan Towers as producer and voila! You’ve got a drive-in special that stars Franco Nero leading the way in a Klondike adventure during the days of the gold rush that also features the well known Fernando Rey who thanks to The French Connection became instantly recognizable in North America and the beautiful Virna Lisi as a caring Nun looking to establish a hospital for the sick and dying in the northern tundra.

Not having read London’s novel I’m not sure if this severely dubbed version remains faithful to the original source novel though I suspect it strays off course for cinematic reasons. The movie version begins with Daniel Martin and his young son Missaele as hunters in the Alaskan snow who capture a wild, half wolf – half dog they quickly name White Fang. The dog is vicious and not to be trusted but with the love of a young boy, a bond develops between the animal and his handler. He quickly become a life saver when the boy falls through the ice and nearly freezes to death.

Into the story comes Franco Nero as a crime fighting journalist looking for an arctic story and he’ll find it in Dawson City. The town is run by a crime lord played by John Steiner. It’s in the town that we’ll meet a con man played by Rey in priest’s robes and Lisi who is looking to aid the sick and under privileged. Nero will be quick to make enemies with the goons employed by Steiner setting the film’s tone for conflict.

When Martin arrives with White Fang and his near dead son at Lisi’s hospital, the dog will find himself in a fight with Steiner’s own four legged killer. When Fang wins the bloody battle by a brutal decisive decision, filmed erratically by Fulci that is supposed to give us a sense of fighting between two wild dogs, Steiner isn’t happy at losing his prized fighting dog. He offers up cash money to Martin for White Fang and when the man refuses, Steiner’s goons move in and knife the boy’s father while stealing the dog in the bargain. Nero arrives too late but suspects Rey standing idly by knows more than he is telling

The stage is now clearly set for Nero to go head to head against Steiner on behalf of the boy who Nero will begin to look after along with Lisi as she nurses him back to health and when Steiner pits White Fang against a bear in a fight to the death, Nero and Lisi will again step in to claim the dog who is himself nearly dead.

This is a Canadian tale so don’t be surprised to see a group of Royal Canadian Mounted Police (Mounties) in full red attire chasing down the man they believe knifed the boy’s father. Yes, Nero is getting through to Rey who will have reasons of his own for standing up to the crooked Steiner as the film comes to a close.

White Fang may indeed be a dog/wolf but he’s got as many lives as a cat when it comes to near death experiences under Fulci’s direction and a script that had almost as many writers involved. One of which is Peter Welbeck. AKA Harry Alan Towers. Not knowing many Lucio Fulci films aside from his cult titles like Zombie, could this and the follow up, Challenge to White Fang, be the closest things he ever made that we might consider a movie for the whole family? Remember to phrase your answer in the form of a question.

The sequel was released to theaters the following year and included Nero and Lisi once again leading the way alongside our four legged title character. 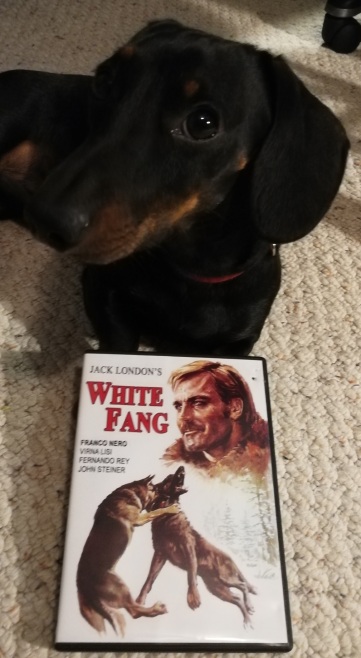 The copy that Brando the Dachshund and I watched was released by the DVD label, Cheezy. While I expected the film to be dubbed, I was a bit disappointed that Nero’s voice was absent. This despite many of his imported films to North America carrying his own voice. What did surprise me about the copy was it carried the original Italian credits. The on screen title is Zanna Bianca. Strikes me as odd that a distributor would take the time to dub a movie but ignore the credit sequence.

Either way Brando loved the hero bits when White Fang saves the day but turned his gaze away from the screen when the dog had to take on the bear in a bloody battle that left him badly in need of Virna Lisi’s loving care.