From Universal International comes this thriller that almost feels like a warped story from the Leave It To Beaver sets. Based on a story by Rosalind Russell of all people. 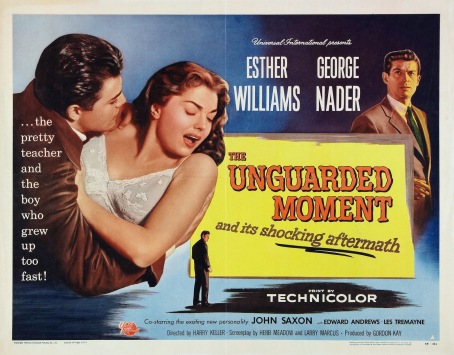 There’s murder in the neighborhood of a local high school where Esther Williams is employed as the music teacher. Surprise! No she’s not the swimming coach for the school’s physical education program. While detective George Nader is on the case, Esther begins receiving sexually suggestive letters from a student. Wanting to put a stop to it she shows up at a suggested late night rendezvous only to be pawed at in the dark and never figuring out who the young man actually was. The scene itself is creepy and not the usual fare for fifties cinema.

Fleeing from the scene she runs into the police and finds herself interrogated by Nader. 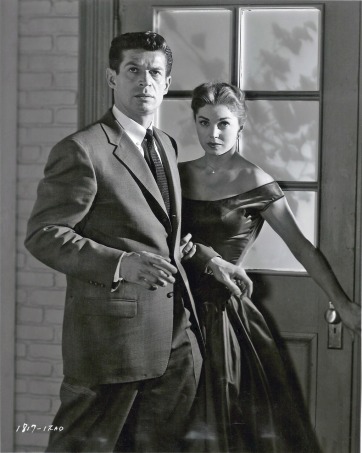 Starring here as the young school jock with a full head of hair and women on his mind is young John Saxon. Williams puts his face to her attacker and in an age of innocence that the fifties seem to be she refuses to give his name to the police and tries to talk things over with him and the school principle. He’s refusing to admit to anything and the principle begins to wonder if he has a nutty prof on his school faculty in need of a husband.

For starters she’s not married and before the film is thirty minutes along the subject has been brought to her attention four times. Once from Saxon’s father played by the always greasy Edward Andrews. Turns out Andrews is an overbearing father to Saxon and just a little bit weird. He’s also a powerful man in the community with the trophy son for the sports programs at school. 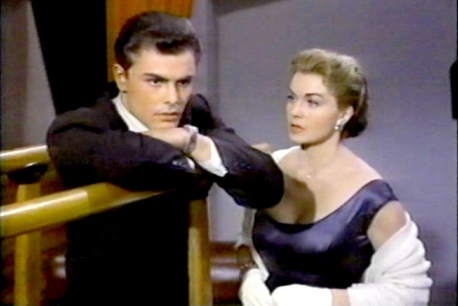 Williams’ reputation is quickly going south on campus due to the “supposed” attack on her and tongues are wagging. Nader is trying to get her to own up to just who she is protecting and pieces things together bringing Saxon in for questioning.

The most bizarre plot point might be the fact that over the opening credits a homicide was committed and in all likely a sexual deviant is loose in the community yet that never seems to be of concern to the school or Williams who seems surprised there was a killing in the first place. It’s Nader’s police detective that seems to be the only character within who is trying to find out if Saxon is responsible.

For us the viewer the mystery shouldn’t come as any surprise as one of our leading characters is just too far over the top when it comes to slicing the ham. “Everybody has something to hide. Everybody.”

Surely this thriller from director Harry Keller pushed the boundaries of what could be called a sexual thriller at the time. Sadly far too much of it comes across as campy by today’s standards. 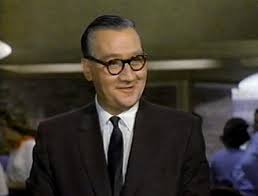 Edward Andrews is just too far over the top with his mugging for the camera and the whole issue of Williams being a single attractive woman seems to bother every male in this neighborhood that looks as if it was filmed on those familiar streets where both Beaver Cleaver played and Samantha Stevens worked her magic. Bottom line is every guy in town thinks she should have a hubby and perhaps Nader might be the guy to tame her.

Rock and Roll plays predominantly over the soundtrack giving it that Blackboard Jungle feel which I am sure was the aim of the producers at the time. Just a role reversal on the lead character going from Glenn Ford over to Esther Williams. 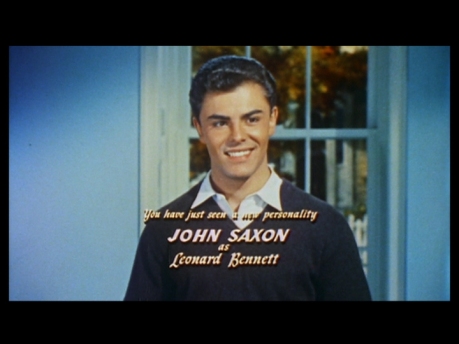 Long time actor John Saxon was just starting out here and over the closing credits gets the special billing, “You have just seen a new personality John Saxon.”

The Unguarded moment was the final of four films I had purchased in the TCM Women in Danger collection. Other titles in the set included Woman In Hiding, Female on the Beach and The Price of Fear.