aka … Vengeance of Hercules 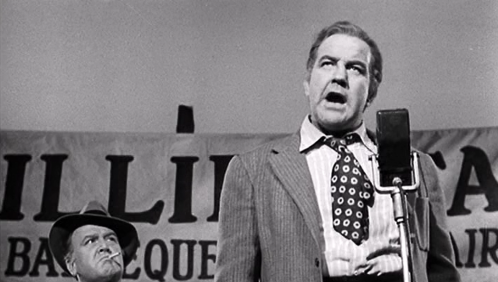 Oscar winner for 1949’s All The King’s Men, Broderick Crawford, ventured overseas to the world of Peplum adventures and in the process gave audiences a very Al Capone like performance while wearing a toga. He’s even sporting a large facial scar to go with the performance. Too bad he’s been dubbed in the AIP version released here in North America though at least the voice subbing for Broderick does try to imitate his growling delivery.

“You’re only a man of fat can muscle full of violence and brutality.”

Yeah that line used to describe Broderick’s power hungry man in a toga could have easily worked as a line delivered by Sean Connery to Robert De Niro in The Untouchables.

Though the leading strongman has been given the name Goliath once the dubbing process was competed under the watchful eyes of producers Samuel Z. Arkoff and James H. Nicholson, it’s more than obvious that we’re watching another Hercules adventure in the wake of Steve Reeves worldwide success in a pair of late 50’s muscleman adventures. Goliath played by Mark Forest, begins the story much like the tale of Hercules having to overcome a set amount of challenges in the caves of bloody horror involving a batman like creature, a stuffed three headed dog and other thrills aimed at the kiddies. It’s here he’ll recover a large, blood red diamond. Tasks competed he’ll return to his home, loving wife and a brother who he is at odds with.

Forest and family live in Thebes which is exactly the location that warlord Broderick is looking to conquer. All he needs to do in order to lay claim to the title of a God is to take 21 year old Federica Ranchi as his wife and have Forest somehow removed. Meaning murdered. What better way than to have Forest’s own brother do the deed. Complicating matters is the fact that our leading lady who was 28 years junior to Broderick, is in love with Forest’s brother as played by Sandro Moretti. The film has a slight bit of the Romeo and Juliet angle working for it.

It seems that the wedge between Forest and baby brother, Moretti, is that Miss Ranchi’s family are believed to be responsible for the death of the two brother’s parents in the ever changing world of just who is in charge of ancient civilization. Forest would rather see his own brother dead before taking the attractive Ranchi for a wife. Then again maybe Moretti would be up to the challenge of eliminating Forest so he can claim his bride.

Somehow as you might have suspected it’s Broderick who is responsible for all the wrong doing and fine print in the script’s plot points. I guess that also means he’ll get his comeuppance as the film reaches it’s 87 minute mark at the fadeout.

By the time of this film’s production, Broderick Crawford, had entered the television phase of his career. He just finished a successful run of Highway Patrol on TV which aired from 1955 though to 1959. Dare I say like Eastwood he thought maybe he’d take an easy payday overseas scoring a vacation in the process in a movie no one in North America was likely to ever see? We know how that worked out for the guy starring in Rawhide.

Including this shot below to prove that there is a dragon in the film though he doesn’t team with Broderick to lay siege to Thebes.

I can’t speak for one and all but on occasion I do enjoy sitting in on one of these dubbed Peplum adventures with far out plots, shaky F/X and Styrofoam rocks that I sometimes think we’re shipped to the stages of Desilu to be used on the original Star Trek series. More so if they star an actor I recognize from our side of the pond. Leading men like Rory Calhoun, Jeffrey Hunter and even Alan Ladd among them. The copy I have here in the vault at Mike’s Take is on DVD issued years ago by Something Weird Video.

Remember them? In my early days of hunting down odd and rare movie titles they were one of the best companies around. That’s assuming you were looking for Herschell Gordon Lewis’ Blood Feast to drive-in shockers to nudie cuties. I don’t see the company brand name much anymore with the rise of Arrow Video, Scream Factory, Severin and others taking over the market. One nice thing about the DVD’s they issued was the bonus materials. Everything from short films on most any topics to forgotten trailers to including a second feature. In this case the second feature being another strongman title ….

Taking over the role of Heracles ( note the a and not a u in that name) is another pumped up discovery from the local gyms of Venice, Kirk Morris. Atrociously dubbed from the get go with laugh out dialogue, Kirk is found lying on a desert beach by the stunning Luciana Gilli, the Princess of a desert tribe at war with another. In a matter of screen seconds, Kirk, goes for the heart. He’s in love but will have to find her amongst the sand dunes of a large desert area when she spurns his advances knowing her father would never allow such a union.

Long story short, Kirk, plays peacekeeper to the two tribal leaders and once he seems to have them talking of a peaceful settlement, gold skinned zombie like warriors turn up and steal the princess disappearing into the land of the dead. Reminded me of the Forbidden Zone in Beneath the Planet of the Apes. From here Kirk will descend downward below the Earth’s surface to take on a dead ringer for Ming the Merciless and an evil Queen to reclaim his lost love before he finds himself dipped in gold only to become a stiff legged zombie warrior for Ming with an iron jaw. Scratch that, a golden jaw.

Boring as hell but once we hit Atlantis at the half way mark this one turned out to be fairly enjoyable for many of the wrong reasons. Yes a fine double bill from the wisely tagged company, Something Weird Video. Now all you have to do is go out and find yourself a copy.