Sometimes you just feel the urge to here that famous Cary Grant delivery so why not toss in the tones of Katharine Hepburn as well. 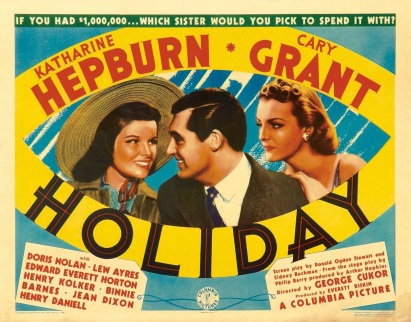 Released the same year as the other more fondly recalled Grant/Hepburn teaming of Bringing Up Baby, this George Cukor film flirts with the screwball comedy but is more rooted in a dramatic love story.

Grant arrives at the home of Edward Everett Horton and Jean Dixon to tell them the news that he’s madly in love with Doris Nolan and soon to become a married man. Off he goes to the address of the home she’s given him. What she forgot to mention is that’s she comes from an incredibly wealthy family and her home looks to be the size of a national library.

It’s here in this monstrous building that Cary will meet her family consisting of her drunken coward of a brother Lew Ayres, her overbearing father played by Henry Kolker and the black sheep of the family, Miss Hepburn. Do I really have to spell it out where this is headed? 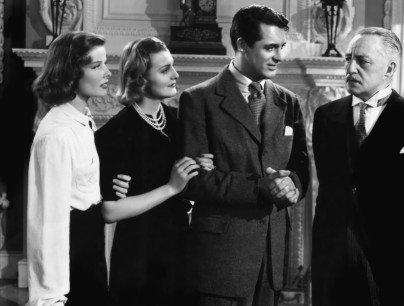 Cary is a bit taken back with the riches before him but is his own man. His is a free spirit and he intends to keep just enough money in his pockets to supplement travel and seeing the world as a young man and work when he’s older and ready to settle down. His new fiancé on the other hand is more like her father and expects Cary to take a position in the family firm settling in to a life of business and dinner parties with the likes of snooty Henry Daniell. Did poor Henry ever play a character that wasn’t snooty?

The film becomes a tug of war as to whether Cary will give in to Nolan or heed the words of the equally free spirited Hepburn and chase his dreams. The patented Hepburn tears will rise often as she quickly realizes that Cary is the man for her. She longs to get away from the riches and her over bearing father who rules the lives of his children. She doesn’t want to become the broken character that poor Ayres has already succumbed to.

No sense going any further as I’ll let you discover for yourself how the plot plays out getting us to the fade out we all come to expect.

Did you ever realize that before there was a Jackie Chan there was a Cary Grant? Well, Cary shows some agility here with some fancy summersaults and springs. Didn’t know he had it in him!

This was the third of four films that the two leads appeared in together. Sylvia Scarlett, Baby and the final pairing from 1940 The Philadelphia Story. Not a bad film in the batch and a bona fide screwball classic with Baby. Aside from Baby, all three of the other titles were directed by Cukor. 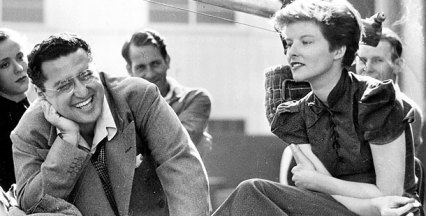 Cukor would work frequently with Kate over the years including some of her films with Spencer Tracy like Adam’s Rib and Pat and Mike. Their final film together came all the way into 1979 with the TV film The Corn is Green.

This was the second version of the script/play. It had been filmed previously in 1930 and actually had Horton in the same role as the friend who helps guide Cary’s character to finding the love will last.

I will admit to wishing Holiday was more of a straight out screwball comedy. Enjoyable as it may be, it took a while to cement itself and pick a direction. Still the winning combination of Cary and Kate verbally fencing with rapid fire delivery at times makes the whole endeavor a fun one. Give it a go.