On a suggestion from a friend I got a good chuckle so I have borrowed the heading and idea for this nod to Mr. Reynolds.

I was there when Burt’s career as a big screen star attraction was spiraling out of control in the latter part of the 1980’s but I had the luxury of catching all his seventies titles on late night television growing up. It seemed that the press was constantly looking to each new release to see if Burt was going to recapture the magic of his earlier output. Expectation levels always seemed a might high to live up to and rather unfair.

Truthfully I always felt that his huge 1977 box office hit Smokey and the Bandit proved something of a curse as it seemed he was constantly trying to top it with inferior product like Stroker Ace and Cannonball Run. Burt’s reputation probably hasn’t been helped by appearing in countless low budget films in later years unlike his seventies contemporaries Newman, Redford and Eastwood.

Preferring to look at the positive side of films and motion picture actors I thought I’d reminisce about some of the flicks I find worth recommending in the career of “The Burt.”

First up if your looking to find some early footage of Burt you can pick up the TV series Riverboat where he played second lead to Darren McGavin. It’s available on DVD and I’ve slowly been working through it.

For Burt’s film career you could check out Navajo Joe from 1966 if you care to see him follow many other American leading men to Europe for a Sergio Corbucci Spaghetti Western. Then there’s the explosive 100 Rifles in 1969 with Jim Brown and Raquel Welch.

I’ll have to include Deliverance here though I haven’t seen it  since my late teens. This is a title I should take the time to revisit to see if I think it’s as good as the film books would have me believing it is. Years ago I never thought to much of it but recently snagged a blu ray so I guess it’s time. In the liner notes is the Burt quote, ” Deliverance was my ticket out of television into movies and I had a pretty good ride in movies because of it.”

I recall seeing The Man Who Loved Cat Dancing as a kid on TV and loving both the cast and the western side of Burt’s on screen persona.

The good ole’ boy character was on fine display with Burt’s 1973 film White Lightning, teaming him with Deliverance pal Ned Beatty and good old boy Bo Hopkins. It’s the tale of an ex-con and the moonshine industry. Reynolds fit’s this role perfectly and has his own agenda culminating in a perfect ending. Burt would star in and direct a sequel to this titled Gator in 1976 that also featured his country music buddy Jerry Reed.

No way one can ignore the Robert Aldrich film The Longest Yard when putting a list together of both Burt titles and sports films worth catching. It’s the classic cons vs. the guards game in Eddie Albert’s prison. Burt leads the cons against Ed Lauter and the guards in a comic delight. Remade years later with Adam Sandler it was nice to see that film let Burt in on the action and carry the ball in the big play. Burt would again team up with director Aldrich for the cop flick Hustle casting Burt opposite French beauty Catherine Deneuve.

Burt’s on screen persona fit the Bandit like a glove. Smokey and the Bandit is just a great popcorn movie enhanced by the cast of characters within. Teaming with Sally Field and Jerry Reed while at odds against Jackie Gleason spelled big money at the box office. The laughs come just as hard and fast as the Trans Am that Burt is driving through most of the movie. While Gleason has most of the great one liners Burt did his best to rattle him, “Sheriff… do the letters F.O mean anything to you? ”

Burt once again did double duty starring and directing in The End. It’s a hilarious black comedy of a man who wants to end his life and seeking the help of a maniac played by Dom DeLuise. Of all the titles on this list I think this one might be the hidden gem to seek out. 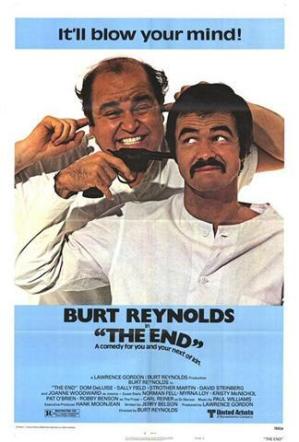 Lastly I’ll toss another cop film into the mix. Sharky’s Machine. It’s a mean and gritty effort where Burt heads a group of police officers and they set out to take down screen nasty Henry Silva while Burt romances gorgeous Rachel Ward. Sure it’s a reworking of the Noir classic Laura but Burt does a fine job here both starring in and directing some top notch action sequences.

Looking at Burt’s filmography I total 49 films seen. So there are still plenty I have to catch up on and feel free to shoot me some suggestions. Perhaps I have seen them but then again there might be something flying under my radar.

Burt did have a comeback of sorts with his Oscar nominated performance in Boogie Nights and yes I would liked to have seen him claim the prize though that still wouldn’t have convinced me the film was worth seeing a second time. Sorry all you Dirk Diggler fans.

For the record my earliest recollection of seeing Burt on the big screen as a kid was the film Hooper. Not sure who dragged me along but glad they did.

So go back and give some of these Burt titles a shot if you already haven’t. Plenty of fun viewing time to be had.