What’s not to love when Kristina over at Speakeasy challenges me to a Dan Duryea Noir flick that I hadn’t seen? Nothing I can come up with. Now toss in one of the genre’s great femme fatales, Lizabeth Scott plus Arthur Kennedy and I’m hooked.

Welcome to the monthly challenge where Kristina and I send a title to the other to broaden our viewing experience or just catch up with a title that has somehow eluded the other throughout the years as is the case here.

On a late night drive Lizabeth Scott and hubby Arthur Kennedy find themselves the recipient of a bag containing thousands of dollars. It’s a case of mistaken identity when their convertible is mistaken for another and the bag is thrown to their car from another passing by. A high speed chase ensues where if you look closely you’ll see our couple drive by Grauman’s. Yes it’s a Hollywood setting.

One look at Lizabeth Scott’s eyes afire when she pours the money onto the bed and we know where this is headed. Especially when she’s at odds with hubby Kennedy over his desire to turn it in to the authorities. He gives in slightly by agreeing to put the bag into a storage unit and holds on to the baggage claim ticket. The ticket will of course play a huge part in just how our plot develops and plays out.

While Kennedy is out of their homey apartment Liz opens the door to find the wonderful tones of Dan Duryea standing in the doorway.

‘Where’s my dough?” This after he finds a stash of furs that Scott has boxed up in a cupboard. She has answers for everything at which point Dan rhymes off with, “You’re smooth honey.” A couple slaps later mixed with a threat and he’s out the door with the promise of returning. 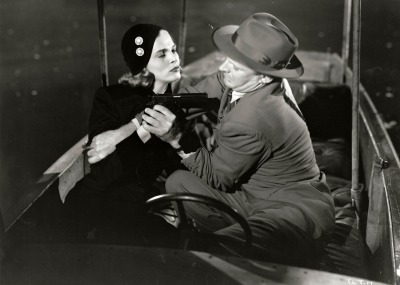 Poor honest, hard working Kennedy returns to find the furs and just knows he’s in over his head with a woman who has eyes and desires for the finer things in life and little worries about how to acquire them. When Dan returns to push Liz around while Kennedy is out the script would have us believe that a split is agreed upon over an afternoon escapade in the bedroom. 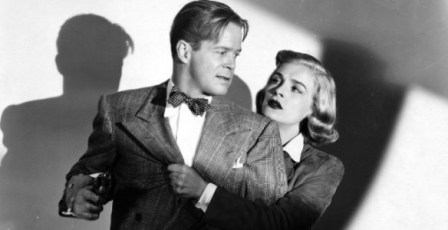 Liz continues her descent into greed and debauchery when she kills her hubby and seeks out Duryea as a partner with the full intention of turning the tables on him when the time comes. For now she needs Dan to help her locate the claim check for the bag full of money. This is where things are bound to get complicated and go awry just as Liz believes the riches are within her grasp.

Kristine Miller stars here as Kennedy’s sister who believes that Scott is somehow behind her brothers disappearance. When Don Defore turns up as an old army buddy of Kennedy, Miller enlists him to help her seek out the truth.

I’d love to go on with the plot line but I’m not one for playing spoiler here so will come to a halt at this point and look into other aspects of this thoroughly entertaining Noir effort from director Byron Haskin.

I have to hand it to Liz Scott here. This is one evil b-t-h she gets to play this time out. From the outset when she lays her hands on the cash her mind is made up that she’ll keep every dime for herself with no intention of letting Kennedy talk her out of it or allow Duryea’s shadowy figure to reclaim it. Her lies are so complete that it gets to the point she actually looks like she believes the lines she’s throwing at the other characters as she digs the hole deeper.

Don Defore gets a good role here in something a bit different than I am used to seeing him in. To me he’s always been something of a Jack Carson type when Carson wasn’t available. But there’s a mystery to his character as well and just what his actual motivation is in regards to nudging Scott towards a confession. Could he be tied up with the cash and working for his own gain? I wasn’t so sure one way or the other and that makes for an entertaining viewing experience.

Dan Duryea. Just the name sets up a characterization one should expect from the roles he’s usually assigned to. Here he’s aggressive, threatening and isn’t above taking advantage of Liz in the bedroom. But what adds to his role here is the fact that he’s really a novice when it comes to just how far she is willing to go to hold on to the money. That said, Dan is wonderful in this black and white thriller as he so often was during his long career that saw him move easily from gangland roles to the outlaws of the western. For more on Dan and his films just click here.

The screenplay is credited to Roy Huggins which he adapted for the screen from his own Saturday Evening post serial and was produced by Hunt Stromberg.

Spotting character actors is always a bit of fun for me so make sure you catch a super young Denver Pyle being hit on by Scott after he thought he was doing the initial “hitting.” Once again Scott’s character turns the tables to her advantage even in this small scene with Denver. You’ll also catch sight of former thirties bad boy specialist Billy Halop in a brief role. Halop was at one time a popular Dead End Kid opposite Cagney and Bogie.

Thankfully, Too Late For Tears was recently rescued from deteriorating beyond recognition and played on TCM in an all new reconstruction. I had planned on watching it and when Kristina issued it as a challenge it only added to the fun. Now it’s time to head over to see what Kristina was assigned to check out. It’s an Irene Dunne film that she mentioned she hadn’t yet seen though admitting to being a fan of the leading lady. Just click here to be transported back in time to a real live Speakeasy where the lovely Kristina is dishing out the drinks.