1948’s Pitfall  offers us a somewhat cynical and moody insurance investigator played by Noir regular Dick Powell. Who better than Lizabeth Scott to join him in this Andre de Toth thriller that also treats us to genre regular Raymond Burr once again cast as the heavy.

Powell has Burr on the payroll as a P.I. looking into the recovery of stolen goods that have been bestowed upon a blonde beauty whose man is doing time for the thefts. Powell thanks Burr for his time and pays her a visit himself.

“Are you a prowler or do you have a search warrant?” 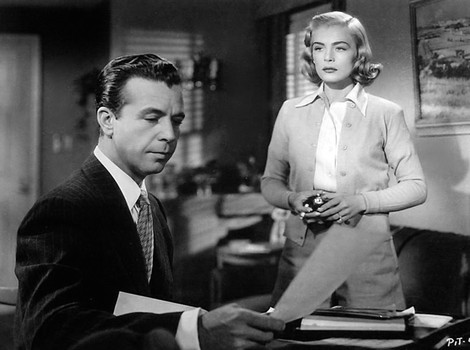 Liz walks in to her place to find Powell snooping around and admiring her modeling photographs. Adultery is in the air when the married Powell stays a little too long getting to know the icy blonde. It seems as if men become easily infatuated with Miss Scott. She’s got one in jail played by Byron Barr, the soon to be lover Powell who easily strays from his boring marriage to Jane Wyatt while at the same time trying to let her keep some of the stolen goods and finally Burr. Burr is the one she doesn’t want lurking around but it seems he’s become somewhat of a stalker with a dangerous aura about him.

It’s like a noir version of There’s Something About Mary!

Powell loves the fact that she has a carefree lifestyle. She’s adventurous and then of course there’s her beauty and fetching smile. He’s caught. That doesn’t sit well with Burr who lays a trap and beats the hell out of Powell and warning him to stay away.

The beating is a surprisingly violent scene that is filmed wonderfully, never actually allowing us to see the damage thrust upon Powell. The blood and bruises inflicted are rightfully left to one’s imagination. Kudos to de Toth in the staging of the scene.

Scott works as a model at a clothing store parading dresses for would be buyers. She’s about to realize just how dangerous Burr is when he takes a seat in the showroom and Scott is forced to parade outfits in front of him. It’s a risqué scene by 1940’s standards with a definite kinky side to it. It’s probably equivalent to a forced lap dance in today’s era.

The leads are all going to converge in violence by the fade out in this customary black and white Noir feature.

Pitfall seems to have come on my radar over the last couple years thanks to TCM and the recent blu ray release from Kino Lorber that I acquired. While it has a great angle with Burr’s depravity in his lust for Scott, of which he is once again excellent in delivering the goods, I am not sure if the comedy that is continually injected into the film is appropriate. I believe it created an imbalance that worked against it.

Though amusing, scenes like Powell admonishing both his son and society in general over selling comic books to kids don’t belong here. I prefer my noir dark and the core of this story is very dark. Perhaps so much so that the producers thought the injection of comedy might balance the film better.

“Terrible trash! Torturing women and men from Mars.” Powell says in reference to the comics he claims are giving his young son nightmares. Here I thought maybe Burr was lurking in the shadows outside the boy’s window.

By no means is this a no go, I just wish it had been harder down the stretch and less family friendly in the outcome. I much prefer the other Liz Scott feature I recently saw for the first time, Too Late For Tears.