Made in Nashville, the home of country music, this thriller essentially plays like a Herschell Gordon Lewis film only with a budget that allowed for three well known faces to movie and television viewers. Written and directed by John Ferris, the film includes Agnes Moorehead who was a definite commodity thanks to Bewitched, Will Geer, who by this point had appeared in numerous television shows as had Michael Ansara who rounds out the trio of “names” attached to this axe wielding affair.

In a flashback to 1943 we’ll play witness to a young woman who has murdered her Mother with an axe. A severed arm, plenty of ketchup and our murderess is off to the Saturday night dance. Cut to the present and that young gal has morphed into an aging heavyset Patricia Carmichael being released from a state hospital. She comes across as anything but sane.

Let’s cut through some shoddy camera work and “chop” our way to the chase. She’ll soon find herself as a hired caretaker to Agnes Moorhead, the patriarch of an aging family who longs for the past. She rules the family estate and doles out cash as she sees fit to her siblings. Among them Ansara as an aging playboy type badly in need of money, his current gal, Ruth Baker, in tow. We have Dennis Patrick who was also a prolific television actor as a failed Doctor addicted to heroin, Anne Meacham as the alcoholic sister and then there’s cousin Elizabeth Els and her lover Robert Gentry. Will Geer serves as Moorehead’s one time beau and now is secured as her personal lawyer and confidante.

Moorehead in what I would refer to as “the Bette Davis role” has a permanent scowl on her face as she barks orders and throws insults at most everyone in the cast who have gathered at her request in the family estate. She’s been talking to “Papa” who has been dead for twenty years and is convinced her time on Earth is coming to an end. Over dinner she’s to let everyone know just what to expect in her last will and testament.

Pretty much nothing. She’s leaving the property to the State and each member of the family can count on just $5000. Barely enough cash to last a month or two the way they go through money or in Ansara’s case, women. In closing she’ll have a bit of warped fun by revealing she’s discovered where “Papa” hid the 600K he embezzled decades ago. It’s an old family legend that no one beyond Moorehead really believes. To prove it she passes out a wad of musty $100 bills. The challenge to one and all is if they can find the money’s hiding place, they can have it. 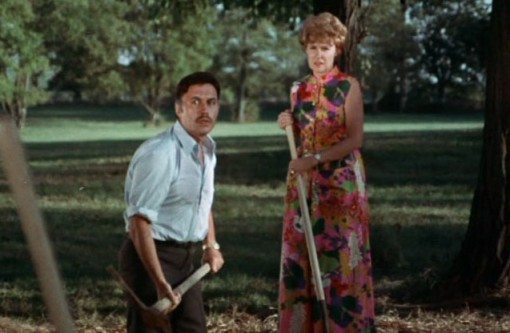 It’s at this point that the blood begins spurting in heavy doses thanks to a razor sharp axe. An axe that poor Miss Carmichael will find bloodied on her pillow as she awakens from a nightmare that gives us some greater detail on just why she murdered her Mother all those years ago. In a panic with the axe in hand she’ll roam the grounds in the night and come upon one of our characters minus a hand, covered in blood and seconds away from death.

She’ll also find a friend who helps her hide the body and what could be more convenient then the smoke house?

The axe murders start to multiply and with each killing the field of suspects narrows. Could Miss Carmichael still be off her rocker? Maybe the wheelchair bound Moorehead isn’t quite as handicapped as she’d have us believe. Ansara wasn’t happy with the terms of the will and how about Gentry as the gold digging lover to Miss Els?

Plenty of would be killers to choose from and the blood quotient accelerates with each murder. I guess you’ll have to tune in yourself to see just where this quirky thriller with a decided angle towards black humor takes us. 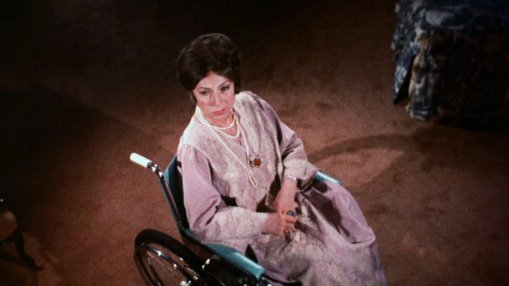 Agnes Moorehead. Did she ever smile on camera? Perhaps but only when she thought she had gotten the better of Dick York or Dick Sargent on the popular Bewitched where she has become eternally famous as Endora, mother to the domesticated witch, Elizabeth Montgomery. I still love that show. Like Moorehead, most of our cast are either a little over the top or in some cases just amateurish I suppose as they all wink at the camera. At least I think they were. Bloody it may be but it’s still played for fun.

Driving that opinion home are the closing credits. The cast are all reintroduced by way of their death scenes. At least the ones that don’t make it to the final reel on two feet.

This turned out to be a “guilty pleasure.” I can easily see myself revisiting Moorehead and company and if I may, might I suggest a double feature with Blood and Lace. Another 70’s low budget treat I have an affinity for. 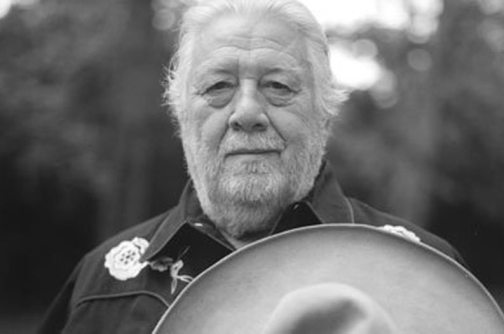 Trivia time. What caught my eye and led to my picking up this blu ray release was the fact that the credited producer was Cowboy Jack Clement. It’s the only actual film credit to his name. I’m no expert on the career of Cowboy Jack but growing up in a house full of country music and taking note of names on album covers and in music documentaries, his name is instantly identifiable. He was associated with Sun Records and Sam Phillips back during the birth of Rock ‘n Roll and if I’m not mistaken it was Cowboy Jack who pressed record on that fateful day when Johnny Cash, Carl Perkins, Jerry Lee Lewis and one Elvis Presley were all trading vocals in the studio.

Those recordings are now invaluable and the foursome were to be dubbed The Million Dollar Quartet. Jack would go on to write hit songs for some Country Music legends including George Jones (A Girl I Used to Know) and play a major role in the discovery and career of the iconic Charley Pride.

Dear Dead Delilah is out via Vinegar Syndrome if you’re so inclined.