From director Fred Schepisi, comes this engaging western co-produced by the two lead actors, Willie Nelson and Gary Busey. Not only is it an engaging film with the magic of Willie Nelson as the central figure, it’s wonderfully captured on camera by cinematographer Ian Baker with Big Bend National Park in Texas serving as the backdrop.

The film opens with greenhorn Gary Busey on horseback and on the run looking as if he won’t last more than a day or two in the sweltering heat. He’s a farm boy who has killed a man leaving him little choice but to leave the family farm. Just as he meets Willie’s title character in the rocky terrain south of the border, he witnesses Willie kill a young man bent on taking him down. Willie has nothing but kind words for the dead man and explains to Gary that the Zavalas family is hell bent on killing him. The reasons why will come out over the course of the film.

Cut to the legendary Gilbert Roland in his final film role. He’s looking for another assassin to take down Barbarosa. He settles on the rugged looking Danny De La Paz. His final instructions from Roland? “Kill him; kill this Barbarosa. Bring me his cojones. Bring them to me on a stick so we can see them and honor you.” 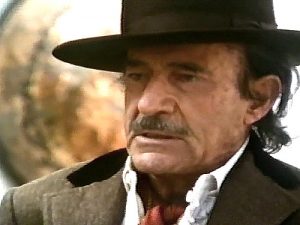 It’s not only Willie who has a family vendetta against him but so does Gary. The father of the man he killed has sent his two remaining sons to gun him down. The trail leads south of the border where Gary has been taken in by Willie to learn what it means to be a highwayman. Yes that’s a not so subtle nod to Willie’s membership along with Johnny Cash, Waylon Jennings and Kris Kristofferson’s group known as The Highwaymen. For more on the quartet’s role in film, have a look here where I might even surprise you with a song.

Willie will take Gary on a sometimes humorous adventure that leads them to robbing a hole in the wall drinking spot, nearly robbing an old couple with comical results and running afoul of bloodthirsty bandolero. Greenhorn Gary will come to learn just how easy is to take life during this segment. I can only say that when Willie hands out his own brand of justice, “payback’s a bitch.” It also serves to enlarge his mythical presence among the locals. I’ll let you discover for yourself just how it all plays out.

As Roland tells stories to the young children within the walls of the Zavala ranch, we’ll learn that Willie is himself a member of the family. He’s married to the daughter of the one time Cisco Kid but has been on the run since his wedding night. Roland has sworn to kill him and continues to send young men to their deaths. That has never stopped the happy go lucky Willie from quietly entering the ranch to visit his wife (Isela Vega) and see his daughter who by now is a young woman. Gary has taken notice. 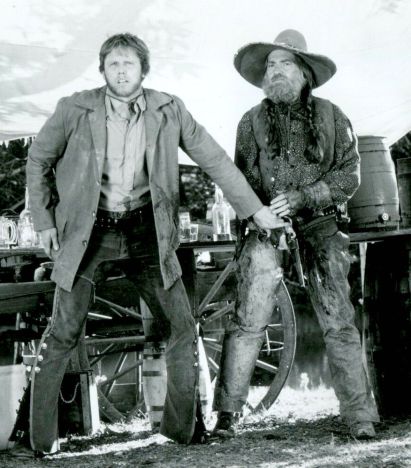 Gary will attempt to go back home only to find he and his family have been cast as outsiders and he’s still a wanted man despite his best attempts at making peace with the elderly, George Voskovec, the father who blames Gary for his son’s death. A keen eye will soon realize that Voskovec is better known as Juror #11 from 1957’s all time classic, 12 Angry Men. Like Roland, Barbarosa would also serve as his final screen appearance.

The final third of the film will see Gary reunite with Willie who is doing his best to avoid a showdown with De La Paz. “You ain’t got enough ass in your britches to pull the trigger on Barbarosa.” If you’re following the film well enough the ending won’t come as a surprise but it’s fitting and doesn’t take away the enjoyment of the trail that has led us to the inevitable.

I’ve always been under the impression that this is a little seen film of minor stature. I find that rather unfair as it deserves to be better known and perhaps with the passage of time it will be. Part time actor Willie Nelson’s place in musical history is secure. He’s become for me a mythical figure in real life which is exactly what his Barbarosa character is on camera. While Busey has become a punch line with the passage of time, some of his early work was first rate and that’s what he is here in the role of the student to Willie’s mentor.

Barbarosa also represents a western at a time when the genre was largely disappearing from movie screens. Sure they were still making them then as well as now but when they do it’s not as if they’re expecting much at the box office and that’s even if they get a national release which is in itself rarer as the years pass. While Eastwood, Costner, Selleck and Elliott continued to make the occasional oater, I still stand by my long ago quote, “the western died with John Wayne.” Thankfully every now and then I’m proven wrong.

Willie Nelson who was by this time already a veteran star on the Country Music circuit was appearing in just his 4th film as he approached his 50th birthday. He’d made his film debut in 1979’s Electric Horseman alongside Redford and Fonda. Busey on the other hand was a film veteran at this point. At 38 he could still play younger than his actual age and had an Oscar Nomination in his belt for The Buddy Holly Story. 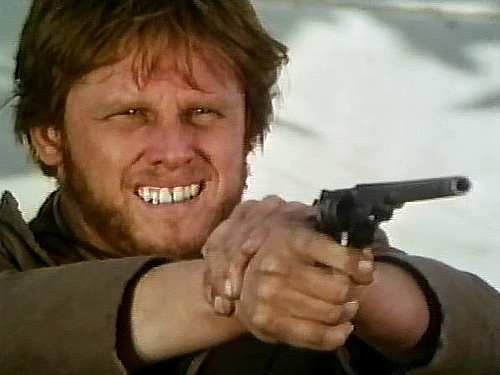 Being a fan of Willie’s music, I recall when the film came out to little fanfare with virtually no studio backing and recall seeing Siskel and Ebert champion the film on their weekly round up. If memory serves correctly, rather than awarding a film the “dog of the week” title, they gave it to Universal Studios for burying the film.

Anyway, what I’m really trying to say is this is a thoroughly enjoyable film and captures the essence of why Willie Nelson is just so damned likable and at ease on camera. A natural talent. Look for this one if you’ve never seen it and as I like to say, if you have seen it, go back and give it a rewatch. It’s worth it.

And as is my custom if I have the one sheet in my personal collection …. 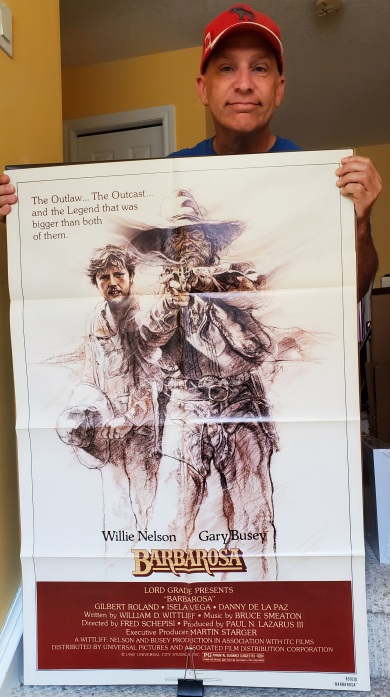