If Steve Cochran learned anything playing opposite James Cagney’s Cody Jarrett in the 1949 gangster classic, White Heat, it’s how to kill indiscriminately and in a cold blooded fashion on movie screens. And here in this Warner Brothers picture directed and written by Andrew L. Stone he does just that. As a matter of fact it could have made for a great “unofficial” sequel to White Heat and the continuing adventures of Big Ed. But then Cochran’s Big Ed didn’t fare to well against Cagney’s Cody Jarrett in that one did he?

Beginning with a needless warning from a trio of state governors reminding us that crime doesn’t pay and giving Jack Warner a big self serving thumbs up for this latest production which I’m sure boosted his already enormous ego, the criminal acts of Cochran and his gang of thugs gets underway in the opening segment when they pull a bank job in broad daylight making a clean getaway. Including himself there are five members in the so called Tri-State Gang. Joining Cochran on his murderous crime spree are Richard Egan, Robert Webber, Wally Cassell and Edward Norris.

Then there are the dames they have in tow including Cassell’s gal Virginia Grey who is loyal to the cause, a French Canadian gal, Gaby Andre, who has made the mistake of falling for Webber and Aline Towne who is the battered girlfriend of our leading man, Cochran.

It’s while enjoying the fruits of their labor at a nightclub that Miss Towne is talking too much and getting Cochran’s temper up. She wants out and this leads to a scene that I found jolting for a 1950 production. He violently guns her down in a hotel. Didn’t see that coming but the killing made it clear that Cochran is a loose cannon and the quotient of violence in this WB effort is picking right up where White Heat left off.

The next heist they have set up proves to be a bust and leaves two more dead in Cochran’s wake. The killing spree has led to an intense police investigation led by Edmon Ryan. With all due respect to Mr. Ryan the film could really have used a bigger name in the role of the cop on the gang’s trail. Not wanting to take away from Cochran’s starring role how about a Frank Lovejoy, Millard Mitchell or perhaps Wendell Corey. Easy to say when looking back in time.

Roadblocks, narrow escapes and a shootout with the police is going to trim the gang down to four members and there’s a great “Noir” bit when Cochran begins trailing Miss Andre who has made a break from the gang in the dark of night on some deserted city streets on the Warner backlot. This whole chase will lead to another scene that had my eyes widening with disbelief of what Cochran pulled off on camera.

I’d rather not go much farther with the story of Highway 301 in order to not play spoiler but I think it’s fare to say we all know going in that Cochran won’t be making it through the final reel and his comeuppance is another scene of notable violence for 1950 viewers. I will say that glossy photos like this one below have little to do with the romantic entanglements in the film but look good I guess. 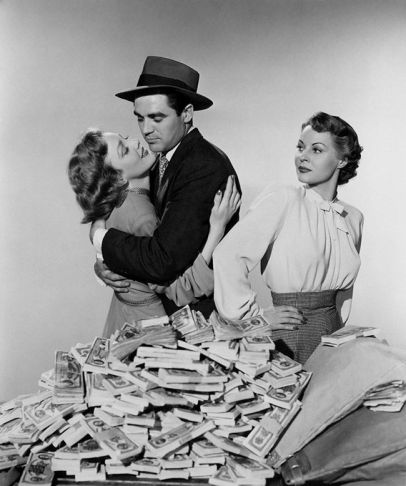 Leading man Steve Cochran began his career in a 1945 Boston Blackie special and quickly graduated to gangster roles at first tormenting Danny Kaye in his comedies Wonder Man and The Kid From Brooklyn before cementing his screen image opposite Cagney. He’d stay busy in front of cameras up until his mysterious death in 1965 at just 48 years of age.

Second billed Virginia Grey who had been in films since the late 1920’s was surprisingly not Cochran’s gal here but rather gang member Wally Cassell’s. Miss Grey who had appeared in everything from the Andy Hardy and Thin Man series continued to act into the 1970’s in the box office hit Airport and on television. As for Cassell, he was also a graduate of White Heat alongside Cochran. 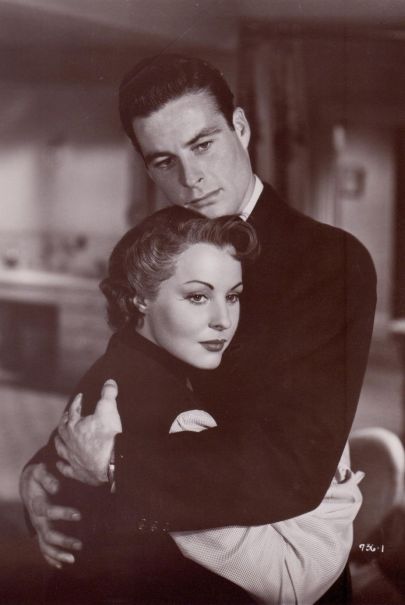 Gaby Andre is not an actress I’m familiar with. A quick bit of research tells me she was originally born in France so casting her as a gal from Quebec, Canada comes off looking plausible. Nearly all of her film appearances appear to be in overseas productions so perhaps this was an attempt by Jack Warner at unearthing a new discovery? I did notice one of her last films was a peplum special, Goliath and the Dragon, proving I had seen her in something else before this gritty gangster picture. Robert Webber makes his film debut and he too would go on to a long career making stops in 12 Angry Men, one of the top brass in The Dirty Dozen and as a hitman in Bring Me the Head of Alfredo Garcia among many others.

Richard Egan was also just beginning his movie career and would also costar in another of Cochran’s 1950 releases, The Damned Don’t Dry. Egan was a busy young actor turning up in 33 film roles between 1950 and 1955. 1956 would see him headlining Love Me Tender co-starring that singing sensation on the rise to iconic status, Elvis Presley.

I happened across this 82 minute gangster picture on TCM and also took note it’s available on DVD thru the Warner Archive line. Thanks to Cochran’s brutish performance I quite enjoyed this but again couldn’t help thinking it might be a better film overall with a bigger reputation if it had cut the governor’s statements at the start of the film and built up the police inspector’s role earlier in the film with a bigger name.

Don’t let that stop you from giving this one a look and please let me know if the violence grabs you as it did me for a production circa 1950.