This one was a new to me title thanks to picking up a discarded Universal Vault release on DVD on one of my many movie hunts in local shops about town. For some reason, I kind of thought it looked like a light spirited frontier tale when in fact it features a rather brooding performance from Howard Duff as Sam Bass opposite feisty Yvonne De Carlo as Miss Calamity.

From Universal International in glorious technicolor comes Duff as a green horn heading to Texas. Just moments into the film he’ll cross the path of De Carlo as the wild woman of the west. Howard immediately impresses the cowgirl with his knowledge and love of horses while calming her steed down. De Carlo is in the Texas town to compete in a horse race that she is sure to lose to a horse Duff knows is far better than any animal in the territory. He also knows shoddy work and sees the blacksmith do a terrible job of shoeing the magnificent horse. He wisely borrows fifty dollars and bets on De Carlo.

Duff’s Sam Bass isn’t quite the hick he’s made out to be but rather a shrewd gambler when the odds are well in his favor. Believing the horse to be ruined in a fall during the race, the owner sells the horse off to Duff for a fraction of it’s real worth. 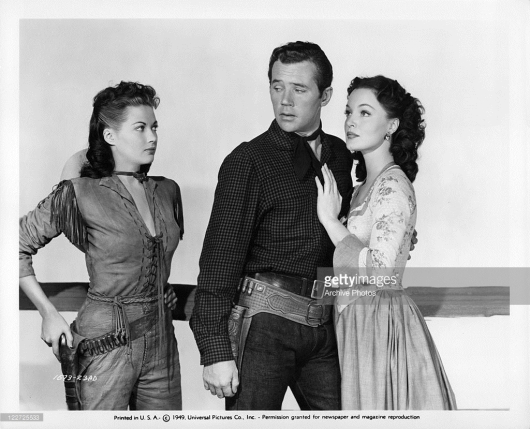 While De Carlo has set her hat for Duff, he’s looking past her towards the lady like Dorothy Hart who owns and operates the general store while her brother runs the town. Like Yvonne, Hart too falls for the newcomer in town while her brother isn’t sold on the greenhorn with a taste for gambling. Still, they take Duff on and he’ll see duty on a cattle drive with likable Lloyd Bridges riding Ramrod. Along for the drive is Milburn Stone of Gunsmoke fame and when hitting the end of the trail they sell off all the cattle only to bet snookered in a horse race organized by the always questionable Marc Lawrence. 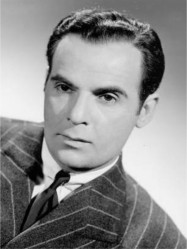 A sure bet backfires leaving Duff and the gang of cattle tramps broke having bet not only all their own pay but the money they received in the cattle transaction. $16000 in total. It’s not just the bet they lose but Duff’s prized horse dies due to poisoning. When he discovers the reasons why, he and Bridges wind up in a gunfight and rob the coach carrying Lawrence and his cash. Wisely, they only take back the money they have lost as opposed to the entire strong box of cash.

Honestly, I kept waiting for this to play lightly but it’s downward spiral had begun and Duff and company wind up marked men. Even when trying to right the wrongs against them. Turning himself in back in the safe confines of Texas, and the arms of Hart, Duff and Bridges believe they’ve been had when they learn they will be shipped back to Lawrence’s town for their “fair trial.” It’s at this point that Duff realizes it’s De Carlo who is the woman who’ll stand by him and rescue him from a certain hanging. She busts the gang out of jail, condemning them to a life on the run.

Also in this George Sherman effort is the ageless Norman Lloyd as a Judas of sorts who infiltrates the gang knowing Duff’s love of horses to gain acceptance. It might lead to the outlaw’s comeuppance. I won’t spoil the end of this colorful feature but will say I was impressed with Duff’s performance as it turns cold and hard due to the hand that fate has dealt him. Also, for the finale being rather memorable for an oater that’s easy to consider as “just another Universal B feature.”

Duff plays his role well and is one of those actors that I’ve discovered later in life. Mainly I guess because as a kid growing up, he wasn’t the flashy leading man type that a young boy would get caught up in with adventurous afternoon matinees starring Burt, Kirk, Duke and the other usual suspects. As for Yvonne De Carlo, different story. Here’s she’s spunky and wild on the range. Not to be crossed and oozing sex appeal I’d like to add. She may have been Lily Munster at one point of my youth but that was bound to change when connecting the actress beneath the make up to her earlier films. 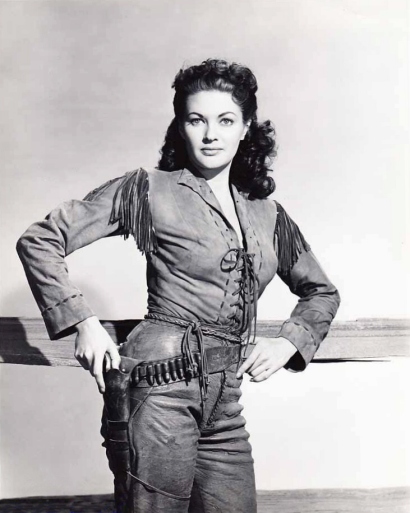 An above average entry for the masses from the ‘B” unit of Universal International.