Having come across an aging pocket novel that tied in with this AIP release I was reminded that I had this movie in a box set of Roger Corman titles and I hadn’t yet bothered to watch this one that stars William Campbell and Mark Damon as the men on the racetrack who continually tempt fate both on and off the track. 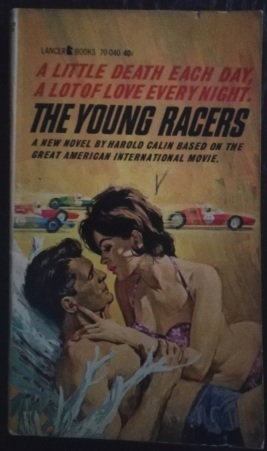 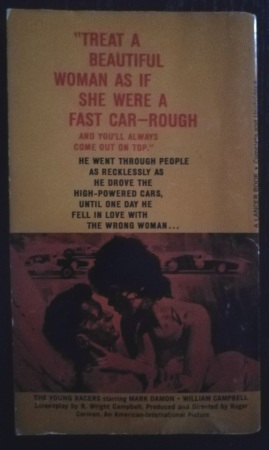 Director Corman and his crew that includes a host of recognizable names filmed this fast track tale on various locations to capture authentic footage. Stops include the Monaco Grand Prix, Belgian Grand Prix, France and England to round out the tour stops. Campbell is starring as the egotistical champion of the raceway who takes no prisoners when behind the wheel and though married to a faithful wife can’t help but indulge himself with the ladies in every city on the schedule.

It’s when he kicks a girl to the curb in Monaco that Mr. Damon will come into the story as a writer who was once a race car driver himself. The girl that Campbell has used for his own pleasures and tossed aside was to be Damon’s wife. While Damon was on assignment she took up with Campbell believing he’d leave his wife for her. Fat chance and while I’m stepping out of the plot for a minute she really couldn’t have been all that much in love with Damon anyway if she’s ready to hop into bed with a “star” while her fiancé is out of town.

Back to our story from screenwriter R. Wright Campbell with a score credited to Lex Baxter. Hell, let’s point out the rest of the names I recognized in the opening credits first. Sound was conducted by an unknown going by the name Francis Coppola, the A.D. was once again Corman regular Charles B. Griffith and I had completely forgotten that Menahem Golan was at one time billed in the movies as a Property Master let alone on a Roger Corman production. Surely action film buffs will recognize Mr. Golan’s name. He along with Yoram Globus spearheaded Cannon Films during the 1980’s to a combination of highs and lows before finally crashing and burning.

As for Damon, he’s intent on writing an expose piece on Campbell as a revenge of sorts. Campbell’s wife played by Marie Versini knows her hubby is chasing women but she’s one to respect her vows. Even when Campbell is flirting with Damon’s secretary and possibly his next love interest Luana Anders. Doing double duty as Campbell’s brother and all around whipping boy is screenwriter Wright Campbell doing double duty in this Corman effort. It’s no secret Corman liked to keep costs down so if he could put anyone behind the camera lens in front of it he was always more than willing to assign roles to them. That includes himself as I believe he can be seen with a set of dark sunglasses near the start of the film when Campbell wins the race in Monaco. Even if it doesn’t say so on the IMDB!

What happens when Campbell starts to think Damon is a man to confide in and conversely what happens when Damon takes up his old profession of racing cars? These two are bound to collide on the track and when Patrick Magee turns up seeking his pound of flesh he reveals to Campbell just what Damon is really up to thus setting the stage for a racing showdown. The rubber is going to burn up the track in the final reel.

Corman devotes a number of pages to this production in his autobiography, How I Made a Hundred Movies in Hollywood and Never Lost a Dime. The script originated as a bullfighting story that Roger had Wright Campbell tweak to coincide with the summer Grand Prix circuit. He then brought in actors William Campbell and Mark Damon. It’s Damon who had worked with Corman previously on House of Usher and he’d use Campbell the following year on The Secret Invasion. Before Invasion, Campbell would also be employed on a Corman production that proved to be a Francis Ford Coppola effort that has developed a cult following as the years have gone by, Dementia 13. Also coming along for that production after The Young Racers was both Magee and Miss Anders. 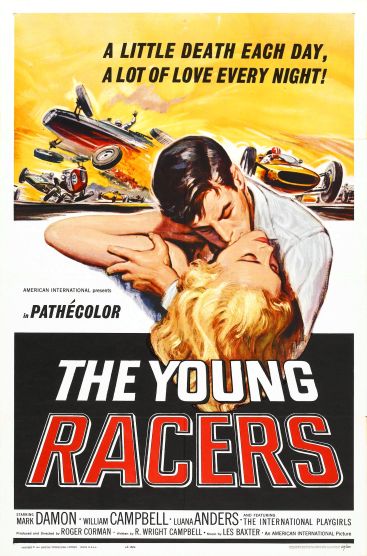 Yes it’s low budget but Corman delivers a solid directing effort this time out in between the Poe/Price engagements. He also spends the 150K budget wisely and what money he did have for the production is on the screen. The location shoot helps immensely and for buffs of racing history, I would think that the on track footage of the cars and races holds some interest.

At just the right running time (84 minutes) this is an enjoyable effort from the iconic “B” film director with a few familiar faces for those of us who love to take in films of the fifties and sixties on a regular basis. Looking for a copy? It’s available as part of a top notch box set of Corman titles that came out on DVD a number of years ago. ….. Yes that’s how long it’s taken me to finally get around to watching this one and again I’m kicking myself for waiting so long to try out another new to me film.