Looking for a 1970’s western with a superior cast? Look no further than this Michael Winner directed effort that includes a Jerry Fielding score with dialogue that flows like cowboy poetry from screenwriter Gerald Wilson.

As is the case with many westerns released in the early 1970’s this one cranks up the onscreen violence in the search for realism. The result is a hardened story that sees the title character Jared Maddox played by Burt Lancaster looking to right the wrong left in his small town by a group of drunken cowboys shooting up the streets and store front windows as they let off some steam while passing through on a cattle drive. When the gang led by cattle baron Lee J. Cobb rides off, there is a dead man lying in the street hit by a stray bullet.

Lancaster plays it mean with a unswaying sense of right over wrong though he knows fully well the courts can be bought off and in all likelihood will be once again by the wealthy Cobb. The problem is that Cobb and his men will all refuse to go back peacefully and stand trial for a killing they are totally unaware of though admit freely to shooting the town up in a drunken haze. Playing the go between in the town that Cobb owns is an aging Robert Ryan who has seen better days. Now he intends to live his remaining years peacefully behind a badge that has been bought and paid for. Burt knows Ryan was at one time a hell of a lawman though he doesn’t judge him. He just doesn’t want to end up like him.

As Ryan puts it, “That’s all I got Maddox, A bunch of yesterdays.”

When Lancaster first rides into Ryan’s jurisdiction he’s pulling a horse with a body draped across the saddle. It’s the first man he has on the list of possible killers he’s to bring back for trial. It sets the tone that he aims to see justice down. Among Cobb’s riders are his quick tempered brother Albert Salmi who sets the plot on it’s violent path, his son Michael Beck, dirt poor neighbors Robert Duvall and J.D Cannon who hire on occasionally, the slippery Ralph Waite and tough William Watson. Not involved in the killing and making his big screen debut is Richard Jordan. He also works for Cobb as a young gunslinger and will figure prominently as the plot develops.

The bodies will pile up despite Ryan trying to keep the peace alongside Burt’s old flame Sheree North who has now taken up with the cowardly Cannon. This leads to a great exchange between her weathered, tired look and the hardened Burt, “Do you know what they call you, Jared? The widowmaker! “

There’s a tinge of the town tamer in here that has gone too far despite Burt not being brought in under those circumstances. He’s here killing men that are known and somewhat respected on Cobb’s lands and in the town. The businessmen want Burt gone and are on the verge of vigilante justice but aren’t man enough to finish what they started as the cool and deliberate Lawman stands tall as they all back off……

“Which one has the words? You’re the store keeper – Luther Harris, ain’t it? Let me say them for you. You want me out of your town. What happened some other time some other place ain’t your trouble. I’ve seen men like you in every town in the West. You want the law, but you want it to walk quiet. You don’t want it to put a hole in your pocket. You take courage from each other and you come armed. Well, there are enough of you. All you need is one man with enough stomach to die first. I’m not leaving until what I came for is done. So if you plan to do anything about it do it now or go home. “

Among them you’ll see John McGiver, Robert Emhardt, John Hillerman, Walter Brooke as the ring leader and who might be the local minster in town? None other than the usually devious Charles Tyner. We’ll also an interesting role enacted by Joseph Wiseman as a man from Lancaster’s past who runs the local brothel but more or less is siding with the brutality of the Lawman.

I’m not going to get into just how the plot plays itself out but would rather focus on some of the dialogue that struck me as classic examples of what one might hear in a western.

From Cobb, “The dead don’t have much.” or maybe “I don’t like men sweatin’ fear in my house! “

From Duvall, “You’d ride a man to hell wouldn’t you Jared?” I’d also like to point out that Duvall in a rather small role here really shines as a man who just wants to work his small spread and be left alone. 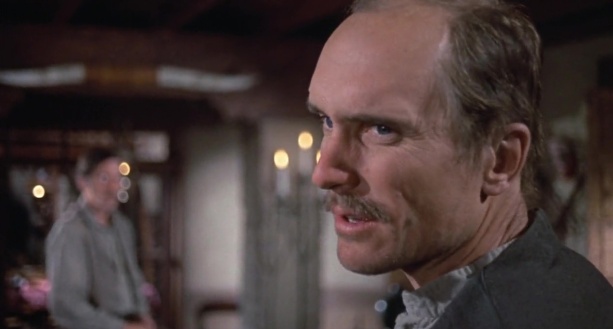 From Wiseman, “You and I sit at the same table, Jared. The virtuous need us, but they can’t stand the smell. “

From our headliner, Burt Lancaster, “A man gets caught in his own doing.” or how about, “Being fast don’t count for much. It’s what you learn in the trade.” Then there’s his code, “I never drew first on a man in my life. That’s the only way to stay clean – you play it by the rules. Without the rules, you’re nothing! “

Not surprisingly screenwriter Wilson also wrote Winner’s Chato’s Land which features much of the same winning dialogue from Jack Palance and the posse he’s leading through rocky desert lands while hunting Charles Bronson. On the topic of Michael Winner, always a controversial subject it seems, I do think he’s done better. As much as I like the casting and the dialogue, I’m not overly fussy with the camera movements and zoom lens he employs here. Still, this is a fine western of the era and puts screen icon Burt Lancaster back in the saddle which fits him fine.

Lancaster would work again with the director and writer on the 1973 espionage thriller Scorpio opposite Alain Delon. In between Lawman and Scorpio, Winner would begin his six film run with Bronson beginning with Chato’s Land that culminated in their biggest screen triumph, Death Wish in 1974. 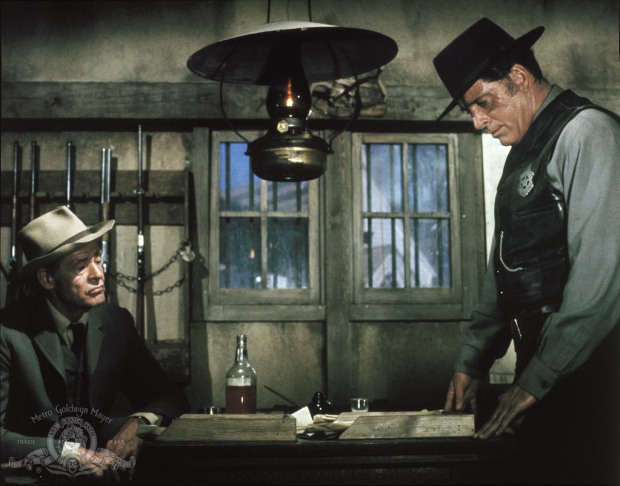 There’s a hardly a face you won’t recognize in Lawman and that’s a big plus. From our leading trio of Burt, Lee and Robert onto some who were already established character players like J.D. Cannon and John McGiver. Others like Duvall would go on to win an Oscar or then there’s Ralph Waite who would turn fatherly for a long series run on The Waltons.

Lawman is available on DVD from MGM or if you’d like to spend some coin and upgrade there’s always the blu ray from Twilight Time. Assuming you’ve visited here before and no I’m a big fan of Lancaster then you shouldn’t be surprised to see I have an original one sheet here in the vault at Mike’s Take.

But I’ll bet you didn’t see this foreign version coming at you “riding a man to hell.” 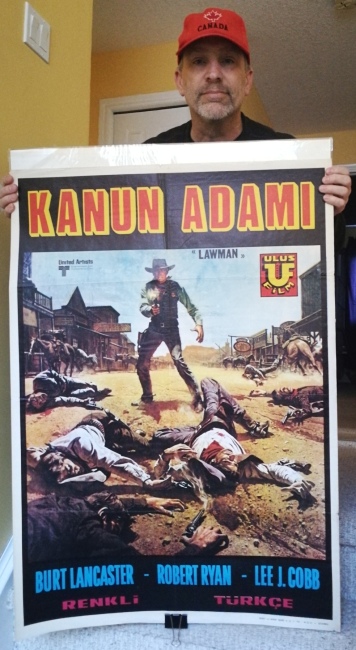