Leading man Stuart Whitman is once again enlisted by writer/director Rene Cardona Jr. to star in this exploitation fare that comes in the wake of the incredible box office dollars generated by the Indiana Jones films. Whitman along with co-stars John Ireland, Bradford Dillman and Hugo Stiglitz had previously worked together on Cardona’s Guyana: Cult of the Damned released in 1979.

The time is set in 1958 along the Amazon river where Stuart plays a heavily bearded fortune hunter. Plenty of wildlife are captured in a scenic opening along the river’s edge that showcases the beauty of the landscape. It’s all betrayed moments later when Whitman cuts off a thief’s finger and throws him overboard to the crocs. Yes it’s bloody and let’s us all know we’re in for some exploitation filmmaking.

What we have in this bloody jungle trek are separate groups that will converge on a fortune in uncut diamonds with only a few left standing. Whitman is going to team with a pair of cutthroats, Jorge Luke and Pedro Armendariz Jr. who are not to be trusted. Dillman is a pilot working for a company scouting the jungle floor for oil deposits and along with his co-workers, Ann Sidney and Clark Jarrett will come across the beheaded bodies of a former expedition and a handful of diamonds leading them into the hunt for more riches. Joining in the fun is Donald Pleasence chewing the scenery as only he can. He’s apparently in exile from Nazi Germany and with the wealth he seeks, he’ll be able to restore the Third Reich to it’s former glory. Incredibly he has a topless guide leading him through the jungles played by Sonia Infante. No this isn’t national Geographic, it’s just a fine example of exploitation drive-in fare.

No matter who comes out of the jungles with the diamonds, they’ll have to deal with Emilio Fernandiz who appears here as a somewhat distant cousin to his Mapache from Peckinpah’s Wild Bunch. Emilio acts as a representative of the government and if one doesn’t pay duty then they’ll find out the harsh treatment he is capable of. 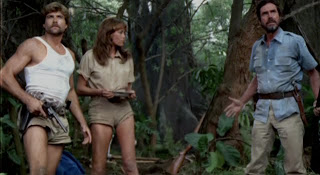 Have I mentioned head hunters? Whitman was involved in that previous expedition that saw his fellow diamond hunters attacked and gruesomely beheaded. He’s overcoming his demons and knows the way to the cache of gems located in a riverbed. When Dillman’s plane experiences troubles he’ll seek help only to leave Jarrett and Miss Sydney to fend for themselves. Thankfully Stuart and his unsavory pals come across the lady with the southern belle accent in the middle of the Amazon jungle. Then again maybe not as Luke and Armendariz haven’t enjoyed the company of a lady in quite some time. Yeah I’ll bet you saw that plot device through the jungle foliage.

Hey didn’t I mention John Ireland was in this? Well he is briefly on hand to collect a paycheck I suppose. He’s a traveling missionary who likes to read the last rites when called upon and isn’t exactly distraught over Emilio’s brutal brand of justice.

Not everyone is going to keep their head intact before the fade out and we’ll also be treated to deaths resulting from machine gun fire, crocodiles, hangings, man eating crabs and other assorted ideas brought forth by director Cardona Jr. Other movies that come to mind while watching this one might be intentional. They include The Treasure of Sierra Madre and The African Queen. From double crosses to leaches maybe our exploitation director was a big fan of Bogie and Huston. 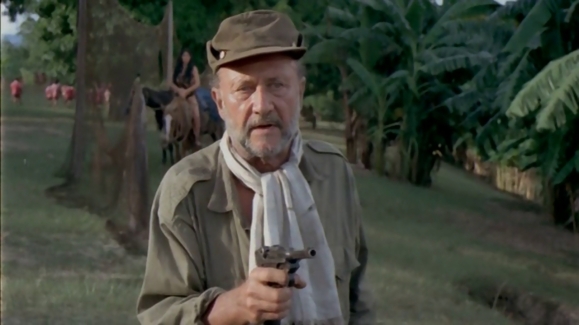 In the end this one is for me all about the actors. I’ve long been a fan of Pleasence and Whitman and to a lesser extent Ireland and Dillman. Putting all four in the same film is enough to garner my interest. I had previously seen this film many years ago on City TV out of Toronto but aside from a couple key scenes, recalled very little about it. I’m not even sure I saw the film uncut though I doubt it was. Pretty sure my teenage eyes would have recalled the nudity splashed about.

If you need to locate a copy it’s available on DVD from the folks at VCI who have done a fine job at releasing odd titles over the course of their existence leading me to repeatedly shell out a few dollars on occasion.