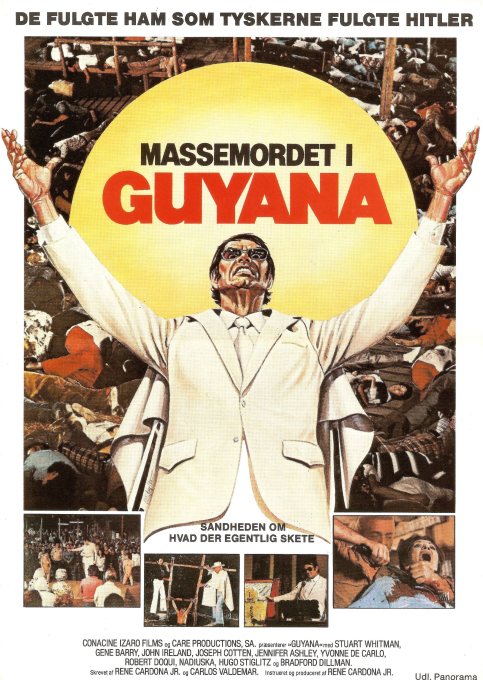 Partly biographical, partly exploitation in covering the atrocities of the misguided Reverend Jim Jones Cult from director Rene Cardona Jr. that sees former Oscar Nominee, Stuart Whitman, taking on the lead role though the names of all those involved have been changed. For whatever the reason, I have no idea as the story is well documented and leaves little to the guessing of just who and what tragedy this story is covering. 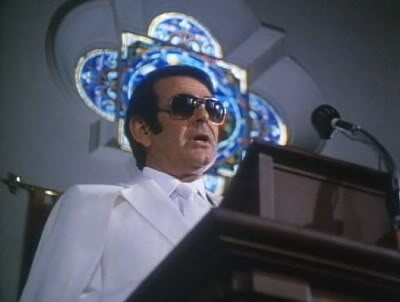 The film opens with what I like to think most any actor can’t refuse, a ten minute sermon on screen as delivered by Whitman under the dark sunglasses I kind of associate with Jim Jones when thinking back to photos I may have seen of him at the time of the Jones Town massacre and beyond. Shortly after the opening stanza, a man is seen murdered who was apparently trying to break free of the church and it’s members operated by Whitman. Bells sound off in government offices keeping their eyes on Whitman’s so called church. In very little screen time, Whitman and his followers are living in Guyana at their religious retreat.

Whitman quickly turns into the possessive, paranoid leader of his people who dishes out ridiculous punishments as he Lords over his flock and of course has more than one lover on the go. The make shift town quickly turns into a concentration camp where people are hungry and being mistreated. Whispers are circulating amongst those who want nothing better than to leave Whitman and his membership.

I can’t say whether the facts and details relayed in the script are accurate or not to the true story but as far as spotting the aging stars who’ve signed up for this project, I’m an expert. Gene Barry is on hand as a United States Congressman who believes Whitman to be a scam artist and a minor league Hitler. It is Barry who organizes a group of reporters to travel with him to the remote town put together by Whitman. Barry has a good role here looking to ensure that no one is being held captive against their will. Whitman wants nothing to do with the United States or Barry but concedes a visit from the congressman hoping to win him over and keep the peace. If you know the story then you know the eventual outcome of Barry and his group as well as the subsequent actions taken by Whitman’s Jim Jones though his name in the film is James Johnson.

“Now we must die with dignity.”

Other faces appearing that were on the downslope of their careers include Joseph Cotten and John Ireland as lawyers and associates of Whitman, Bradford Dillman as the devoted camp doctor mixing the toxic cool aid and a twisted Yvonne de Carlo as another off site member of the cult. Also involved is actor Hugo Stiglitz whom Quentin Tarantino turned into a Basterd in the guise of Til Schweiger.

I revisited this title for the first time since a late show airing many years ago on local CITY TV out of Toronto over the Halloween season but found it too brutal of a topic to write about during the scary season because quite frankly, it’s just to close to reality and when one sees the masses being forced to commit suicide on screen, it’s not a pleasant viewing experience. I suppose this film version could be considered low brow cinema and exploitation fare but I don’t think the actors handled it that way. Especially Gene Barry who I felt came off best.

One year later, following this release, Powers Boothe appeared as Jim Jones in the telefilm, Guyana Tragedy : The Story of Jim Jones. Haven’t seen it but if you wanted an actor who looks as close as possible to Jones, the late Boothe, who won an Emmy award for his performance is your man. The topic was unofficially revisited just recently in Ti West’s 2013 film The Sacrament for those looking to see another film that covers the same material. Truthfully I had no idea that the West film was going in this direction. Just expected some sort of horror film going in. Aside from these film versions there are others and plenty of documentary footage for those looking into the true events behind the mass murder/suicides.

Not the typical feel good movie but I like the roster of actors assigned to the film so that’s what prompted a revisit for me having acquired a copy on DVD from VCI.