aka … Nosferatu a Venezia, aka … Prince of The Night, aka Vampire In Venice and who knows how many other vampire themed titles.

Yes I’ve seen Murnau’s 1922 silent masterpiece and yes I’ve seen the Herzog remake from 1979. So it’s about time I checked in to see the follow up that once again cast the volatile Klaus Kinski as the title character who this time out has grown hair with a life of it’s own and is badly in search of a steady hand behind the camera and on the written page. Still, it’s no where near as bad as some reviewers have led me to believe.

“Nosferatu is a supreme Lord of Evil. Second only to the Devil himself.”

Looking very much like a vampire himself in a cloak on a misty morning is Christopher Plummer arriving by boat in the canals of Venice. He’s actually our Van Helsing of the story though we’ve had a name change. He’ll arrive at the house of an elderly woman and her family including two young attractive women and a wasted Donald Pleasence as the family priest. I have no idea as to why Plummer has shown up at the household other than he’s made a study of Nosferatu and believes the family’s ancestors were once plagues by the demon Kinski. This allows Plummer to narrate a flashback giving us Klaus in all his vampiric glory. 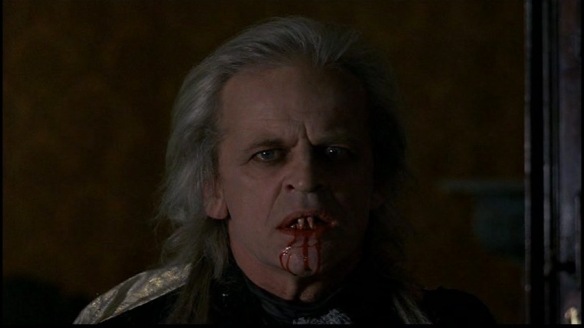 Again for no apparent reason it’s time to hold a séance against the good Donald’s wishes and before we know it, Klaus rises from the crypt sporting his all new fiery look with BIG 80’s hair. He’ll want answers as to who has summoned him from his slumber back to eternal torment. There’s a very Argento feel to the upcoming scene when Klaus turns up at the estate and crosses path with an aging woman who looks as if she just stepped out of the Suspiria set. Her demise at the hands of Klaus also has that Argento know how. I’m referring to Argento in his prime so you may consider it a compliment to this Nosferatu. Had I compared it to a later day Dario effort, it shouldn’t be taken as such.

Before Canada’s own Chris Plummer takes his final bow he will let our heroine know that only the love of a consenting virgin can kill Klaus’ Nosferatu. It’s a bit weird from here on it though you could have said that following the opening credits but the tone changes in the direction and that is supposedly because on this production Klaus went through directors as often as he decided to scream out an expletive on set.

Can’t say this is any great effort but for Klaus completists it’s worth seeking out not to mention you also get Plummer and Pleasence for the price of admission. Chris and Donald first appeared together in the 1967 military thriller Night of the Generals and considering it’s about the German army, it’s surprising Klaus never got cast in there somewhere in a lesser role at the time. Plummer would return the role of Van Helsing officially when he faced off against Gerard Butler’s Dracula 2000. A film I’ll confess to enjoying on more than one occasion.

Klaus was sadly near the end of his run. This second go around as Nosferatu would fail to find a release here in North America hence my taking so long to actually see it and he’d only have two films ahead of him before his death at the age of 65 in 1991. His second to last film, Paganini, represented his only directing credit. Though of course he was accused numerous times of directing himself anyway.

So Nosferatu In Venice won’t do anything to erase the Herzog-Kinski flick from your memory where the angriest on set actor of them all (dare I say the maddest) donned the Max Schreck make up in what was for me a triumph partially due to the fact that I was the right age when it hit theaters. This Klaus is self indulgent and tossing aside all direction and make up suggestions to appear as he wanted to, or rather demanded might be the better word.

Yes I love a good Klaus freak out on the set story or the chance to watch some of the uploaded ones on YouTube. Just wish I could understand German sometimes as they rarely have subtitles. Thanks to his frequent collaborator, Werner Herzog, there are a number of stories, footage and images of just such behavior.

I’ll leave you with this trivia bit borrowed from the IMDB….

On his first day, Klaus Kinski got into a violent argument with director Mario Caiano and refused to work with him. The director then agreed to leave the set (after being paid his full salary), the third director to leave the picture before principal photography was complete. Facing disaster, producer Augusto Camanito then decided to direct the film himself so he wouldn’t have to pay another director. Since he had almost no directing experience, he was helped by his assistant Luigo Cozzi. Kinski also reportedly directed some scenes himself.