The Toronto Daily Star has plenty to offer us classic film fans who plan to spend a night on the town in search of a good movie that’s hopefully part of a double bill. Pick your favorite movie star and you’re bound to find something playing locally at one of the movie houses or drive ins.

Stars like that new sensation, Rock Hudson opposite Arlen Dahl in technicolor no less. 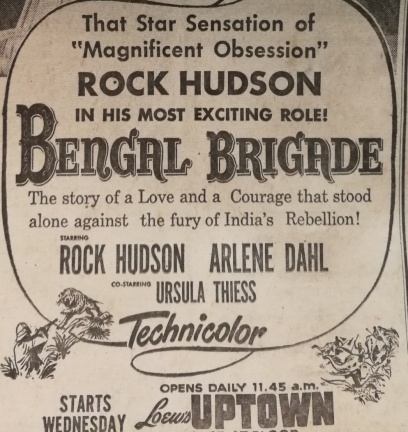 Bring the kiddies along at no charge and hit the Scarboro Drive-In for the Alan Ladd classic. And if you go, see if you can barter an original one sheet for me. Please and thanks.

Why not catch Rex Allen making an appearance in town as he promotes his singing cowboy career.

How about England imports, Stewart Granger or Dirk Bogarde? If not then catch that Doris Day – Joel McCrea double feature.

Just what kind of western is this latest outing from Burt Lancaster? What, no love for that Buchinski guy in the billing either? 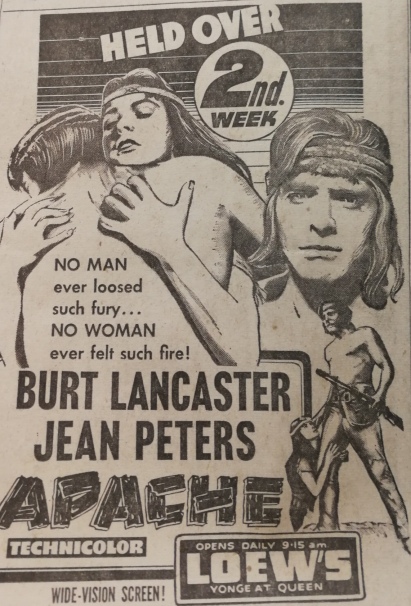 The power of advertising has got me hooked, this looks like a must see double bill and I sure wish I could see the artists original rendition of this in color.

I’m quite sure a Marilyn Monroe double bill will have me and the buddies interested in attending the Capitol on Yonge Street. I just won’t tell my pals I’m secretly as interested in seeing co-star Richard Widmark as well. 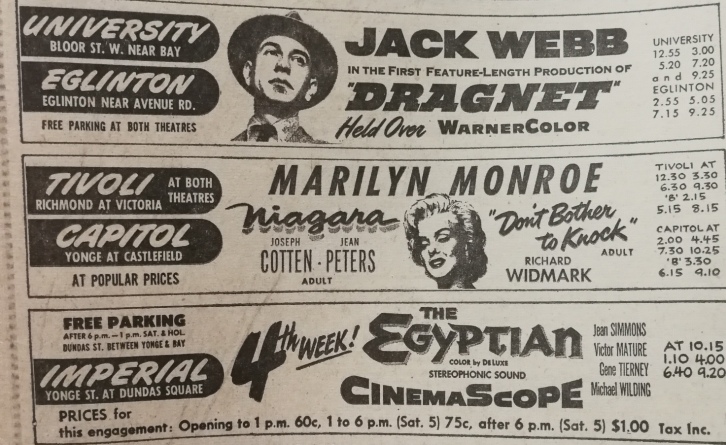 More of those imports from abroad with that Doctor flick in it’s 7th week!!!! 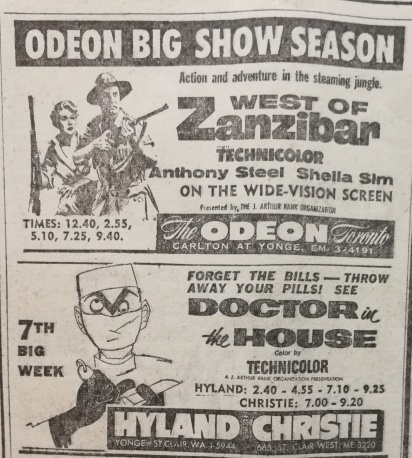 I hear Bogie is back in Oscar contention for playing a psycho ship’s captain. I hate to miss anything with Bogart so put me down for this one.

Let’s look at the double bill listings. Think I’ll head down to the Oxford. You?

Speaking of double bills, this gangster pairing is a no brainer but Jack Webb’s name in bold lettering is somewhat of an insult to Ladd, Scott and Heston.

Hey, I just spotted Dan Duryea’s name on this ad so I’m automatically thinking this might be worth checking out.

Here’s another great ad with artwork that has me itching to take in the double bills. Truthfully I wish I could pair Dangerous Mission with Hell Below Zero so I guess I’ll have to sit in on both showings to catch everything.

Alan Ladd films are playing all over town and Bob Hope even turns up for some fun and laughter at the Savoy on Yonge.

I see Donald O’Connor is still being paired off with Francis the Talking Mule. Have you heard the mule gets more fan mail than him or is that just the press agent for Chill Wills spreading rumors?

Always something in rerelease so if you missed that Greg Peck western the first time around…..

I think I’d pay to see this double helping of ADULT entertainment.

Well that’s all that’s playing tonight in the big city known as Toronto, Ontario, Canada. Have you narrowed down your picks for the week? Did you spot your favorite movie star(s) in there somewhere?

A little something for everyone so enjoy your night on the town or sitting in your big sedan at the drive-in with your favorite gal on your arm.