Here’s an article I was fortunate enough to have published in the 2016 year end edition of the Noir Magazine, The Dark Pages. Thanks to Karen and Kristina for the invite to participate and printing my “take” on this John Garfield/Patricia Neal/Michael Curtiz classic. 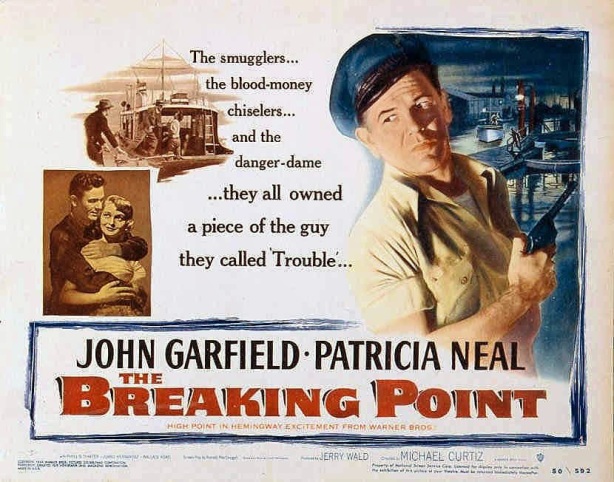 While Warner Brothers via Howard Hawks may have loosely adapted the Ernest Hemingway story, To Have and Have Not into the box office smash of the same name cementing the legend of Bogart and Bacall, the studio would go back to the original source novel and adhere much closer to Hemingway’s written word for this adaptation under the title, The Breaking Point. Subbing for Hawks this time is perhaps Warner’s greatest house director, Michael Curtiz.

Enlisted for the leading role of the classic down on his luck character trying to keep a fishing boat business afloat is John Garfield. This time out our Noir Icon is married to Phyllis Thaxter and the couple have two young daughters. Struggling to keep up with boat payments, the suggestion is in the air that they give up the business and move back to be with her parents where John can join the family business. 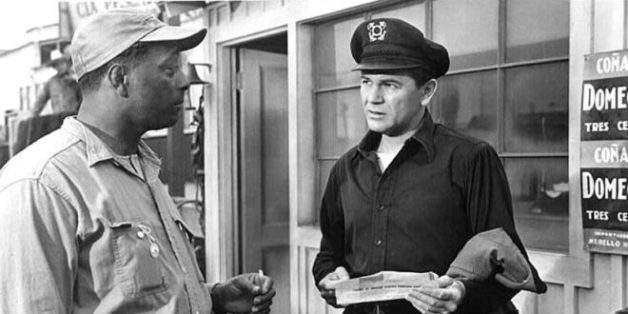 One could argue that Garfield is a born loser as Harry Morgan. He’s working a dead end fishing boat and easily gets taken on his next fare. When a supposed high roller hires the boat to take him from San Diego over to Mexico for a bout of gambling and the companionship of the movie’s leading lady, Patricia Neal, Garfield finds himself and his first mate Juano Hernandez left stranded with no cash to pay their way back home after their fare flies back to the States leaving his bill unpaid. Left in his lap is the spurned Neal portraying what audiences of the day may have considered a high priced call girl.

This segment presents the opportunity for one of the classic settings associated with Noir features. A smoky cantina, gambling tables, loose women and an electrifying temptress in the form of Miss Neal. 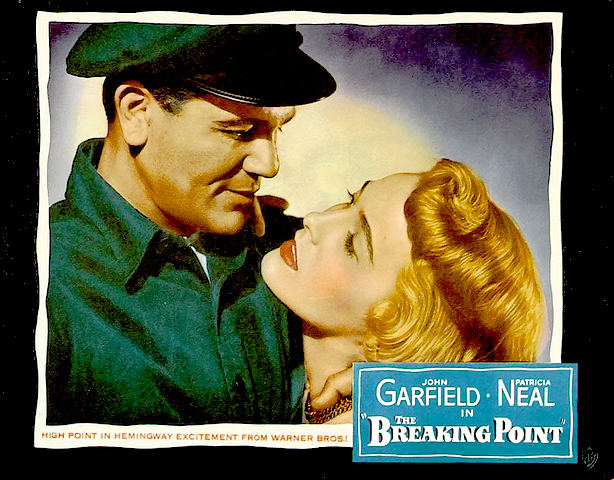 Neal and Garfield let the sparks fly between them. Mainly because Garfield is attracted to her and suffers the effects of guilt because of it. He’s tempted and Neal is open to the idea. Sex is in the air.

Enter the wonderful character player, Wallace Ford as a small time underworld figure always looking to make an easy dollar. He preys upon the less fortunate and knows Garfield is in a bind. He convinces our fishing boat captain to take a meeting with slippery Victor Sen Yung of Charlie Chan fame who promises cash for delivering a group of refugees north to American soil. Though he tries to go it alone, Neal and Hernandez witness the sequence that follows allowing Garfield to play it tough when the rendezvous goes bad leaving one man dead. 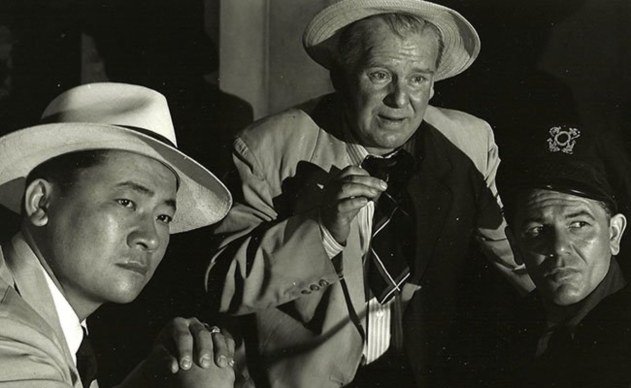 Arriving back in U.S. waters, Garfield’s boat is impounded by the customs agent overlooking the harbor. Reports out of Mexico are that his boat was involved in some illegal smuggling operation though the facts are somewhat sketchy just yet. Worse still is the appearance of Ford once again and the threat of blackmail hanging over Garfield’s head. Between losing the boat, his attraction to the blonde haired Neal and the ever present temptation to go bad via Ford, Garfield is entering classic Noir territory as pressures are mounting.

No matter how hard Garfield may try to escape his downward spiral, he’ll find that his destiny lays with the ever present Ford sitting atop his shoulder as if he were an evil conscience.

There’s plenty of action to follow before the film plays itself out offering the paying audiences of 1950 a chance to see Garfield in full tough guy mode as they were accustomed to. As with most of John’s films, there is far more going on below the surface of his tortured Harry Morgan character that is heightened by the performance John delivers. A performance that is only enhanced by the actors around him. 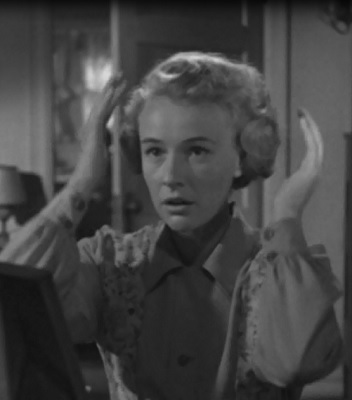 Phyllis Thaxter as the loyal wife who fears she may be losing her husband to a bout of despair and the temptation of a far more exciting woman is pitch perfect. The scene where she dies her hair blonde to match Neal’s look is a cry of desperation that is sure to elicit an emotional reaction from both John, their two small children and the viewing audience.

The on screen relationship between John and Patricia is both argumentative and sexy. She’s available and he knows it. They fence around the subject throughout the film. While Thaxter may wish she could be as glamourous as Neal to recapture her husband’s attentions, Neal would much rather take Thaxter’s place in the home knowing she had the love and stability of the good man she sees within John despite his struggles to stay honest to both his family and himself. 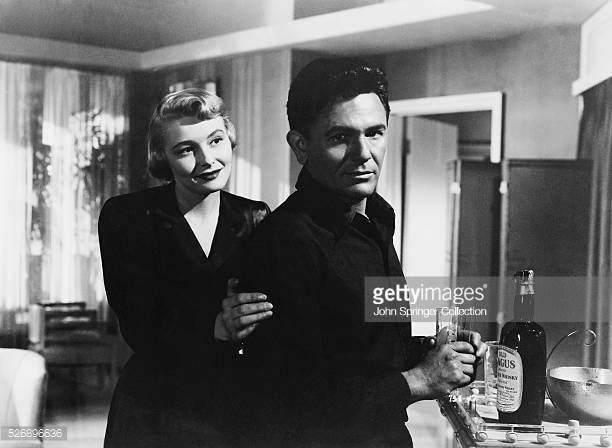 Neal was at this time coming off the steamy 1949 release of The Fountainhead that teamed her with Gary Cooper. The camera seemed to capture within her that on screen sex appeal that worked so well in Noir like characters. She would even transport that same femme fatale to the western for 1951’s Raton Pass opposite Dennis Morgan.

Wallace Ford would not only shine here as the cowardly hood out to use Garfield but would play an equally memorable role in Garfield’s next and sadly, final film, He Ran All the Way in 1951 as that of the strong willed father who refuses to back down from Garfield’s gangster Nick Robey who has taken up residence in his family’s apartment. Ford is easily one of those faces most classic film fans may recognize but struggle with putting a name to the face. 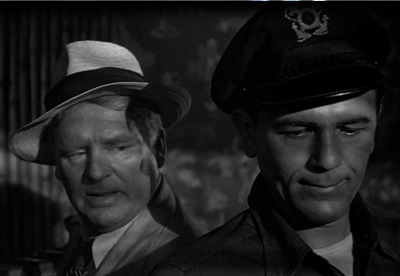 While clearly overshadowed by the Bogart-Bacall version of the Hemingway story, this version is another of the classic “me against the world” roles that John Garfield could easily make his own in the latter part of his career. It’s a role that according to a letter from John to director Curtis published in “He Ran All the Way ; The Life of John Garfield” he was quite excited to be playing. Garfield and Curtis had a working relationship that extended all the way back to John’s film debut in the 1938 Curtiz directed Four Daughters. They would subsequently team up for Daughter’s Courageous, The Sea Wolf and finally The Breaking Point. John Garfield would pass away in May of 1952 leaving a succession of roles that fueled the antihero characters that lay in the years ahead for the likes of Brando, Dean and Newman. 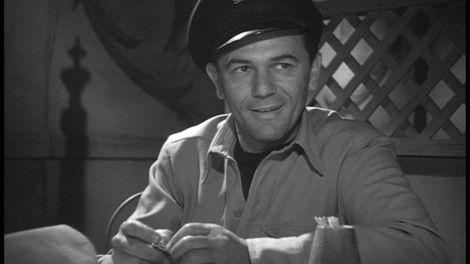