It’s Noir time, Denmark style when John Payne takes his tough talking cop overseas for some location filming with Andre De Toth along for directing duties in this gritty effort. Gritty when it wants to be. In other words, whenever Payne is on screen in this early rendition of what was to come in the 1970’s with Harry Callahan, Popeye Doyle and Paul Kersey. What’s that? You don’t know those three names? I say to you in my best Lee Marvin imitation, “Get a book and look it up.”

As good as Payne is in this black and white feature, I can’t say the same thing about the film as a whole though it does have some well done scenes when it comes to action and violence. The main problem with the film is noticeable right from the outset. Payne enters the film as if it’s missing the opening act and we’re left to piece things together ourselves. In all of a couple minutes, Payne has arrived in Copenhagen to investigate whether his sister (Natalie Norwick) who has been living abroad has killed her low life gangster lover. He grills her like a two bit whore while lighting a cigarette and even belts her at one point in the picture. Not only is his last name Payne but in this film, he delivers nothing but Pain to anyone he crosses paths with who isn’t dealing from a full deck.

The trail will lead to his sisters gal pal brought in by the producers all the way from Mississippi, Anne Neyland, who scores an “introducing” credit at the opening of the film.

Might she be the right woman to melt the cold blooded heart of Payne’s travelling detective? Maybe I need to see this one a second time but clues just seemed to come out of nowhere which once again has me believing script pages may have been tossed aside in favor of budget cuts and action sequences which De Toth really nails. Alexander Knox will enter the story as the ring leader of a counterfeiting operation who sets some thugs upon Payne to end his poking around the nightlife.

While it’s never really caught on camera, Payne is apparently working with local police as an undercover agent trying to worm his way into Knox’s team of underworld figures. Just as he’s making some headway in that direction, an innocent slip up will cause the customary shootout towards the finale of this fast paced 84 minute programmer.

What’s actually caught on camera is quite good but it’s almost a case of where’s the rest. The screenplay is credited to De Toth but it’s too choppy though the violence is brisk and harsh putting it a notch above many other films of the time I that department. Payne comes off best which isn’t a surprise as he was getting to be an old hand at hardened characters. Here he wastes little words on camera and is short with the ones he does deliver. His is a character who doesn’t suffer fools gladly which comes thru in spades when he belts his sister right on the “kisser.” 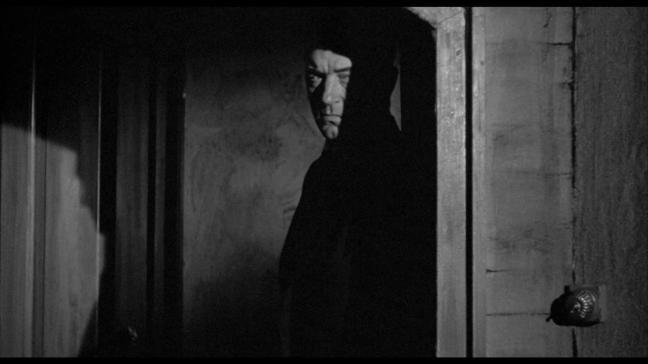 De Toth was a solid director throughout the fifties working mainly in action and western films though he did also helm the 3D classic House of Wax. While not as connected to Randolph Scott as Budd Boetticher, De Toth also worked with the western star no less than six times and filmed a couple of other Noir titles, the worthwhile Pitfall and Crime Wave.

Hidden Fear might appeal best to those who take an interest in the career of the director and those who like to see John Payne act tough. I’m guilty on both counts. Thankfully this is another title rescued from obscurity and poor prints by Kino Lorber if you’re looking to score a copy on blu ray.