English thespian Kenneth More scores the title role in this Raoul Walsh effort that also sees the proper leading man landing the bountiful Jayne Mansfield as his paramour in this cinemascope western spoof of the Bob Hope variety. 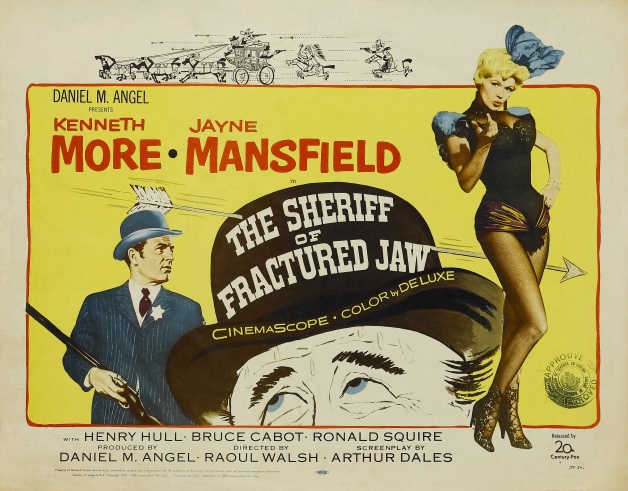 Starting off across the pond, More is the nephew of Robert Morley. He’s somewhat of an absent minded professor who is working on a horseless carriage but the family business is Tibbs and Co. Armourers and Gunsmiths. With business lagging and More looking to make good, why not head to the new world where guns and six shooters are in high demand. Cut to More in a stagecoach with the likable and totally drunk, Sidney James making a brief appearance as a fellow traveler. Cue the Indian attack. More is having none of it and in upright British fashion marches off into the pack of swarming Indians and gets the upper hand on the chief demanding that everyone get along. It works and he promptly points out, “time for a spot of tea.”

By the time More arrives in Fractured Jaw, word is out that the English dandy is not one to be fooled with. The stage drivers begin to spread the word that he saved the coach from certain doom. Slick gunfighter William Campbell takes notice and puts More on his hit list hoping to carve out another notch in his six shooter. Into More’s world comes the heavenly form of Jayne Mansfield. She runs the saloon where he beds down and she doubles as the featured attraction on stage for the crowd of rowdy cowboys. She’s also as tough as any man and can shoot a pistol with the best of them. 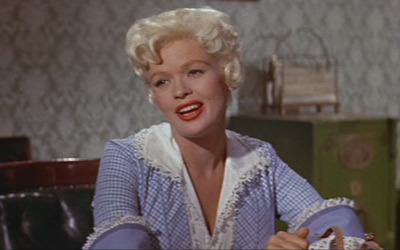 More has arrived in a town without a sheriff and there’s a range war going on over water rights. Both sides assume the fancy Englishman is working for the other and figure to kill him off right away. Mayor Henry Hull confirms as much when he sees More slip a derringer out of his coat sleeve by way of a sliding contraption. It’s just another gadget that the docile More intends to market but it only adds to the growing myth of his capabilities with a gun.

When Campbell corners More in a saloon and pushes whiskey after whiskey on him, More is going to awake the next morning the newly crowned sheriff thanks to some comments he makes to Hull about law and order and Hull seeing him as a fit man with a gun for the job.

Love will of course be in the air when Jayne sees through the fabricated story of More the killer and his true gentlemanly self. She’ll even take him quietly out of town for a shooting lesson which will only lead to a romantic embrace. Her main worry is that, “Sheriffs don’t have wives, they have widows.” With his legend spreading for no apparent reason other than wagging tongues in town, Bruce Cabot turns up as well thinking he’ll add the Englishman to his list of kills. All to no avail for the local Undertaker who keenly follows More about assuming he’ll be scoring a new client at any given time. It’s a role made for John Carradine but alas, he wasn’t employed this time out.

Comical situations will collide in this so-so effort from the famed Raoul Walsh. Far from memorable though the idea is a good one. More does fine in the lead role that really could have been played and parodied by any number of actors from England or thereabouts. Perhaps if Bob Hope hadn’t already done something similar as Painless Potter he might have been the best fit with plenty of throwaway lines and self deprecating humor. 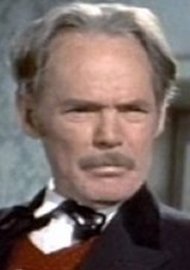 The best line in the film for me comes from crusty old Henry Hull as the Mayor. When More offers him a cup of tea, Hull gets cranky and barks out that drink is, “only for old women and sick people and tastes like swamp water.” I can’t say I agree wholeheartedly but will say I’ve never been a fan so that line caught my attention.

Hating to be overly critical I have to say I’m no fan of the back projection shot that gets interspersed with location footage and this film has far too many clips like these. More and Mansfield are clearly on location down by a romantic river but upon more than a few closeups, they’re back on a damned soundstage ruining the sequence as it goes back and forth between the two locations. I’ve never understood this style of filmmaking from yesteryear. I’d also like to say it feels as if Jayne looped her entire scenes in a recording studio. They continually come off as phony when comparing to More and the others in the cast.

Nowhere near the western spoof it could have been and considering Walsh is the director that has to be considered disappointing but More does his best to make it work and for that reason you might want to take the time to check this 20th Century Fox release out. I found it in a box set of Jayne Mansfield titles a number of years ago should you be looking for a copy. 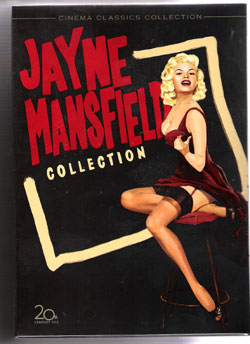