An all star cast is featured in this Lew Grade production that allows for a special billing as the star names roll by over the opening credits …… and Elliott Gould as Charlie.

This one is a revisit once again and a film I seem to recall very little about other than a cameo by William Holden in a Stalag for prisoners of war, “Are you still here?” and I vaguely remember the trailer playing on TV when the movie was in local theaters. Looked like an action packed movie for the kid I was in ’79 but I had to wait till the VHS days if I recall correctly.

Utilizing the picturesque Island of Rhodes as a location shoot, this tongue in cheek WW2 flick offers us everything from escaping POW’s, a possible heist, the underground Allied forces to Roger Moore as the Camp Commandant housing prisoners, David Niven, Sonny Bono and Richard Roundtree.  Moore sporting an Austrian accent is far from the evil Nazi that the SS would prefer him to be. He’s an arts dealer who has his POW’s working an archaeological dig. He ships a few minor treasures home to the Fatherland but keeps the rare and priceless artifacts for himself.

The soldiers in his command are frequently to be found at Claudia Cardinale’s brothel. Little do they know that the underground resistance leader is her lover and uses the brothel as a hideaway for himself and the radio transmitter needed to feed information to the Allied forces. Taking on the role of the head freedom fighter and lover to the stunning Cardinale is Telly Savalas playing “cool and tough” as only he can. In other words it’s a delight to see him here taking on a commanding role among the star roster.

Into the story comes a couple of USO tour entertainers whose plane has gone down in occupied territory. It’s showgirl Stephanie Powers and the low budget Bob Hope,  Elliott Gould. Moore takes a liking to Powers and needs Gould to school him a bit in the ways of Americana. Most importantly, Moore wants to know more about Ann Sheridan and just exactly what “oomph” refers to. Gould is an obvious choice to become the entertainment director for the camp.

When Savalas joins up with Niven and company to overthrow their captors, the film takes a decided turn towards action, explosions and a heist. First the freedom fighters are going to have to see if Moore wants to join the winning side and become the good guy his fans demanded of the world’s current 007 at the time of this film’s release. No worries there. The leading members of the cast are divided into who is going to overtake a fueling depot and which are to climb a mount leading to a monastery full of gold and riches. With plenty of German soldiers stationed in the areas, there is sure to be plenty of action sequences.

While Elliott doesn’t totally trust Telly he is quick to point out, “I’m more greedy than I am cautious.”

Plenty of gunfire and hand to hand heroics ensue under director George P. Cosmatos. It’s not James Bond big screen action but against the location of Rhodes, it looks pretty good. David Niven returns here to the Island that saw one of his biggest box office hits, The Guns of Navarone. Niven is always fun to watch and continues to make me think he sometimes writes his own lines to keep that David Niven styled wit alive. Richard Roundtree is a man of action and like Shaft, handles himself admirably when the gunfire begins. Powers is gorgeous as she goes about entertaining the troops with a diversionary striptease while Sonny Bono plays it light as an Italian chef for his German captors.

Mister Gould mugs for the camera repeatedly along the way but he too gets in on the freedom fighting doing his part in the shoot outs and going into battle double fisted with fire arms as he tries to keep up with Telly. It’s that Telly Savalas charisma that shines brightest. To see him give us that Zorba the Greek dance with Claudia is pure cinema fun and it’s Telly’s film for me in the end.

Surprisingly, I found Moore miscast. Mainly because he’s on the wrong “team” at the start and easily spotted “acting” due to that accent and playing a bit of a buffoon. Not having seen this in years, and knowing it was a WW2 film, I expected a far more Bond like performance and role. He gets in some action sequences and lands the fair lady Powers, but I kept waiting for the plot to unveil he was some undercover agent for God and King. Like Moore’s on camera style, the film never takes itself very seriously. 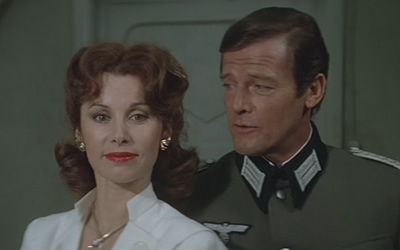 For years this film was out of circulation in my corner of the world. I’ve had a VHS tape floating around that I had yet to check out. Thankfully Hen’s Tooth picked it up for release allowing me to land a DVD print of the 120 minute version that looked very good.