“You call the tune and you pay the piper. Meaning… you don’t like the treatment, don’t rob the banks. ” 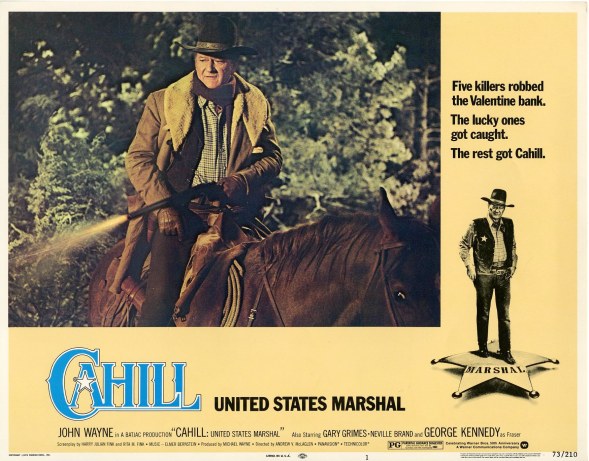 When a line like that is spoken by John Wayne, it’s bound to carry a heavy weight or perhaps warning might be a better word behind it.

Cahill cast the Duke as a stern Cogburn(ish) type who hasn’t done right by his two young sons. He’s been absent most of their lives chasing down one criminal or another leaving them with Marie Windsor or Denver Pyle as surrogate parents. Duke’s in for a rude awakening when the young duo are involved in a bank heist with nasty George Kennedy.

Andrew V. McLaglen as director gives us a great opening and freeze frame of Duke riding into a camp taking on five men, lone handed. It’s all a rather friendly shoot out as the men all know Duke and realize he’s a hard man. That doesn’t stop them from making the mistake of raising their guns at the legendary icon and winding up either head over a saddle or handcuffed. Either way, Duke’s bringing them in.

Upon returning to the local town he discovers his oldest son, Gary Grimes in a cell guarded over by Harry Carey Jr. and the bank robbed. There isn’t a trail to follow but the thieves made off with the money and left two men dead in their wake. What Duke doesn’t know is that his rebellious son teamed with cellmates, George Kennedy and Dan Vadis to bust out and right back in again leaving them a solid alibi. Duke’s youngest son played by Clay O’Brien has hid the loot till the gang gets discharged.

Gary Grimes seemed to be the go to youngster at this time in the 1970’s. He starred in a trio of westerns including Cahill, The Spikes Gang and The Culpepper Cattle Co. It’s 1971’s Summer of ’42 that he may best be remembered for. After this run of titles he seems to have all but disappeared from the screen in the ensuing years.

Like 1972’s The Cowboys, this film featured Duke dealing with youngsters. Mr. Kennedy serves up the heavy this time as opposed to Bruce Dern and does one heck of a job at scaring little O’Brien. Young O’Brien was actually a carry over from the ’72 favorite. Nothing comes easy for George and he’ll have to wait around to get his money from the youngsters. It doesn’t sit well with him and of course, he isn’t too be trusted.

Playing the sidekick to Duke this time out is Neville Brand as a half breed tracker doing double duty as Duke’s conscience in properly raising his two sons. Brand is good here in a light role once again proving he could play more than just a vicious heavy.

Things will go full circle for Duke and Brand as they bring in a gangly group who happen to have money in their saddles led by Duke’s long time pal off screen, Paul Fix. Will the men hang for a crime they didn’t commit or will Duke’s boys try to right their wrongs and live up to dad’s expectations. Either way they’ll have to deal with burly George Kennedy.

Like many of Duke’s films, it’s a family affair produced by Batjac. Along for the ride we get the aforementioned Paul Fix, Harry Carey Jr. and Denver Pyle, we also get Hank Worden, Royal Dano, Duke’s son Michael as a producer and of course McLaglen as the director. While Duke might be a bit long in the tooth here, it’s of little consequence to his loyal legion of fans. He once again delivers the goods as the stoic good guy doing what “a man’s gotta do” when the chips are down.

A good score is included here from Elmer Bernstein that also features a song by country chart topper, Charlie Rich. The story is from Harry and Rita Fink. The duo also wrote Big Jake for John as well as the original Dirty Harry entry.

All that’s really missing here is a solid fisticuff trade off between our two big men, Duke and Kennedy. The pair had tangled previously in 65’s The Sons of Katie Elder resulting in what might be the highlight of that film when an axe handle KO’s George in a scene that looks oh so real.

Cahill might not be one of the most talked about of John Wayne films but that shouldn’t deter one from revisiting it or seeing it for the first time. It serves as old fashioned entertainment and doesn’t try to be anything more.