If someone asks me if I’d like to partake in a glass of fine wine aged to perfection, I’ll pass as I would much rather watch Sam Peckinpah’s stunning end of the west classic. It’s as close to a fine wine as I’ll ever come.

I can’t say how many times I have watched this favorite but I can recall my early years of discovery and studying the film. Devouring anything I could find written about it, Peckinpah and it’s production.

Initially this film came to my attention at a young age when I would sign out film books from the local library. A Pictorial History of the Western and others would feature glossy pages of the Bunch and the battle of bloody porch. This put the film on my radar at a young age.

I don’t know if the controversy surrounding the movie’s violence kept it off of TV while growing up but I had already seen most of the other sixties titles of note like Cool Hand Luke, Bonnie and Clyde and The Dirty Dozen. Finally the Bunch would turn up on the late show allowing me to witness the ballet of death caught on film. It leaves a remarkable impression and still does to this day. Not long afterwards the VHS era struck and William Holden and his gang would have been one of my first rentals.

Initially it was the foursome in the final shootout that I focused on. Ernest Borgnine was well known to me at an early age and I was aware of William Holden though I hadn’t seen many of his titles. Ben Johnson was another familiar character actor and as for Warren Oates, this was probably my first introduction to him and I was hooked.

Watching the film again recently I found myself looking at the scenery and trying to uncover other facets of the movie. One thing that jumped at me is that most characters in the film have somebody. Borgnine and Edmond O’Brien have Holden. Oates and Johnson as the Gorch brothers have each other. Bounty hunters and all around “chicken stealing gutter trash,” Strother Martin and L.Q. Jones have one another, slaughtering anyone in their sights under the protection of the law.

While Holden has Borgnine at his back he longs for the one character in the film who really has nobody till the fadeout, Robert Ryan. The problem for Holden is of course that Ryan has turned bounty hunter for Albert Dekker and tracks the Bunch into Mexico. Still, Ryan has his own moments of longing to return to his old gang, “We’re after men. And I wish to God I was with them. ” The campfire scene where each thinks back to the same moment in time when their partnership dissolved is well framed by Sam and it was one of the studio cuts upon the film’s original release.

The music score from Jerry Fielding booms over the visuals during the opening sequence of credits and the final march that our quartet embark upon heading towards Emilio Fernandez, knowing they have outlived their time. The music builds to crescendo before each battle and the anticipation of the bloodshed is clearly seen in the eyes of Strother as he kisses the barrel of his rifle and the heartbeat of the music gets louder. 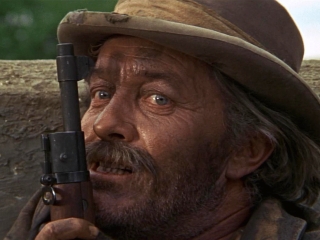 Of note is the music that accompanies many of the scenes when the Bunch are not on the trail. Jamie Sanchez as Angel serenades around a camp fire. A village joins in to say their goodbyes in song as the gang rides on. Perhaps even more notable is when General Mapache stands with his troops during a battle he has a mariachi band playing behind him. Even Strother Martin warbles a tune as he heads off to what Ryan wisely knows is certain death.

It’s interesting to note that while the overpowering images of violence and bloodshed run rampant throughout the 144 minutes there is comedy to be had and scenes of tranquility when the gang lay up in Angel’s village.

A review of The Wild Bunch is a rather useless endeavor as so much has already been written about the movie and it’s legendary hell raiser of a director. The stories and many of Sam’s stock company have added to my enjoyment of rewatching the film repeatedly over the years. The script is wonderful and full of classic Sam quotes, “I don’t know a damn thing, except I either *lead* this bunch, or end it *right now*! ”

Holden was by this time well past the matinee idol years but it could be argued was never better than he is here as Pike Bishop. Ernie is solid as the man who would go to hell and back for Holden. I never focused on Ryan years ago as he wasn’t in “the Bunch.” Now I look at his performance and continue to marvel at just how good he is here. I love the scene at the close when he picks up Holden’s gun and it seemingly transports him to a better time. His Deke Thornton is weathered and wise seeing the futility of it all.

I’ll end the “love in” here but of course want to remind you, if you have never seen this landmark western from Sam Peckinpah then you are cheating yourself of not just a great western but one of cinema’s great films. If you have seen it there is no harm in  revisiting it every now and then like yours truly.