If I could choose to do it all over again, I’d watch this title with a theater full of like minded classic film fans. We’d laugh up a storm and all agree it was the most entertaining night out at the movies this year.

For the wrong reasons!

Jeff Chandler stars here as a well kept man who likes it that way. You might say he’s a gigolo though Mr. Hays wouldn’t approve of such things in the mid fifties cinema. In our opening scene there’s a loud argument and a drunken woman falling to her death just after Chandler leaves the room towards the balcony.

Officer Charles Drake isn’t so sure that the coroners decision of a suicide is correct. He’s going to be poking around through out the proceedings. Much to the chagrin of our aging leading lady, Joan Crawford. Joan owns the beach house where the death occurred and has decided to move back in though her real estate agent Jan Sterling is shopping the property.

Chandler is all over Crawford from the moment she awakens in her new surroundings. He’s cocksure of himself and she wants nothing to do with his brand of eye candy. Or does she.

Their romantic scenes are what fuels the high camp within this Joseph Pevney feature.

Chandler with his dead pan delivery….. “Whenever I wake up a beautiful girl, I, uh, always give her breakfast. “ Or how about this politically correct number… “That’s right, be afraid of me. A little afraid, at least. A woman’s no good to a man unless she’s a little afraid of him. “

Joan with her own style of camp…… “You must go with the house – like plumbing. “ Then there’s ……. “I have a nasty imagination, and I’d like to be left alone with it. “

It’s a rather stormy love/hate relationship with Joan and Jeff. She just can’t help herself despite knowing he’s a scam artist backed by con artists Cecil Kellaway and Natalie Schafer. Schafer is in full training here for her role as Mrs. Howell on Gilligan’s Island. Any clip within could have been used for a screen test to play opposite Jim Backus. 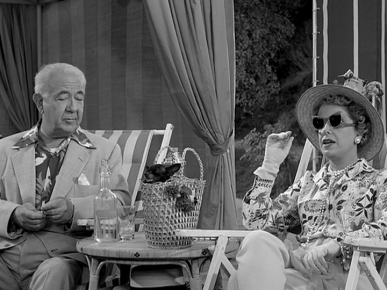 Let us not forget that within this overly melodramatic love affair there is still a murder to be solved and a killer among our variety of characters. Not that it’s too big of a mystery as the plot practically thrusts the answer in your face when Chandler is confronted by…..oops. I know the answer is obvious but I refuse to play spoiler!

Part of the warped fun here is Chandler’s refusal to accept NO as an answer to his overtly sexual advances at Joan. In the world of black and white fifties cinema where Crawford is concerned I guess NO means yes because once Jeff gets through her tough exterior shell she just can’t live without him.

At least not until her imagination runs wild and she begins to think that Jeff just might be out to murder her after all.

Throw logic out the window with this one and settle in for a fun romp with a lost looking Chandler and plenty of high camp in the style that only Joan Crawford can deliver.

This is the third of four titles I have checked out now in the TCM Women In Danger collection. So far it’s proved to be money well spent with Woman in Hiding the real gem in the set. 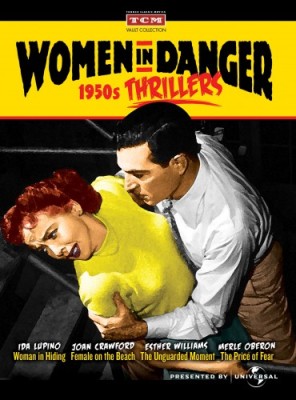