“The Coop” takes a poke at his own image and brings Loretta Young along for the adventure. 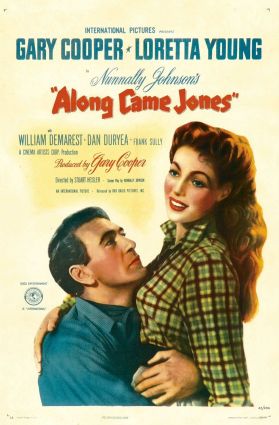 Long before actors like Burt Lancaster moved into producing their own films in the fifties Gary Cooper took a shot at it with this light hearted western that takes his likable yet simple minded Mr. Deeds and puts him into the west where he is anything but a quick draw artist. As a matter of fact he can barely clear a six shooter out of it’s holster without fumbling the piece.

The film opens with a stagecoach robbery and a rifle left behind with the initials MJ. They just happen to be the same as Coop’s character Melody Jones. When his initials are seen on his saddle everyone in a hole in the wall town assumes he’s the notorious Monte Jarrad. A vicious killer and fast draw artist. Along with his saddle pal William Demarest, Cooper quickly realizes these cowpokes are frightened of him and he plays it wonderfully. He’s enjoying the notoriety that has been bestowed upon him. Demarest isn’t so sure and as the voice of reason thinks they need to get back on the trail.

Loretta Young appears who at one time was the love interest to the notorious outlaw played here by Dan Duryea. At first she tries using Cooper in order to give the wounded Duryea who is holed up in her a barn a chance to get away. But before she knows it she begins to fall for the gentleman cowboy who means no harm to any man. And why not. Just check out how Coop loads up for a kiss.

While I enjoyed the first hour of Cooper playing against type and Duryea playing his patented nasty character I found the film wandered a bit to much at times holding it back from being first rate. The use of some poorly constructed screen shots behind our leads didn’t do much to inspire location shooting at times either. The film does get back on track in the final shoot out where Gary does what a man has to do and faces down the vermin that is Duryea. It’s a fun filled wrap up that compliment the first hour quite nicely.

As it turns out this is the only film that Gary is credited on as a producer. He brought Nunnally Johnson aboard as the writer and Stuart Heisler as the film’s director. On the trailer for the film he harkened back to his character  Mr. Deeds really going to town for the marketing campaign.

Loretta Young proves to be a good match on screen for Gary and when confronted by the presence of Duryea does more than hold her own. When it comes to Dan Duryea, Cooper cast the right man for the job. Not only does Dan play the role wonderfully but as Loretta points out to Coop “your both tall and spindly.” If Cooper was going to be mistaken for an outlaw they at least had to look somewhat the same.

Filling out the cast with William Demarest is another face etched into western cinema in the “I know his face but not his name category.” It’s Ray Teal who you may recall played Sheriff Roy Coffee for many years on Bonanza.

Then there is the song Along Came (tall thin lanky) Jones. I pulled this line off of Wikipedia……………

The song was inspired in part by the 1945 Gary Cooper film Along Came Jones a western comedy in which “long, lean, lanky” Cooper mercilessly lampoons his “slow-walkin’, slow-talkin'” screen persona.

This one is out there on DVD as part of the MGM Western Legends collection.