While this is far from being a top drawer thriller there are three things I really liked about it. Sadly none of them have anything to do with what appears on screen during this Canadian productions eighty-six minute running time.

First off the famed Russian Roulette expression makes for a great movie title. Secondly it has both George Segal and Denholm Elliott appearing together as they had in the first rate King Rat back in 1965. Lastly as someone who loves collecting film posters, this one perfectly captures the seventies style of poster art that one would see in the theater showcase. 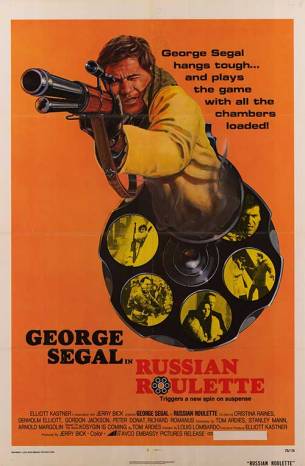 Segals on suspension from the Canadian Mounties who gets tangled up in a muddled espionage plot. It seems Denholm Elliott wants him to knock off Val Avery. Problem is someone pinches him before Segal.

One of the better scenes in the film involves Segal and hitman Richard Romanus. Segal is being taken for a ride but soon turns the odds in his favor with Romanus on a railway bridge.

Filling out the cast is Louise Fletcher who would win an Oscar this same year for her notorious role as Nurse Ratchet in Cukoo’s Nest. Also mixed in here we have Gordon Jackson and as Segal’s leading lady and damsel in distress, Christina Raines.

It all comes to a head in downtown Vancouver during a summit meeting and an  assassination attempt that Segal is trying to stop. Running around the streets are a bunch of crazy Canucks picketing the Russian diplomat. Unless the Canucks someday win the Stanley Cup, we’re not likely to see that many people raising hell in the streets of Vancouver town anytime soon.

The two main problems with this production are a script that isn’t that interesting or easy to follow and the lack of decent direction from Lou Lombardo. Lou only directed two films which doesn’t surprise me. What is surprising is that he edited some great films. Namely The Wild Bunch as well as McCabe and Mrs. Miller and the Ballad of Cable Hogue.

Being a Canadian it was kind of fun to see a film featuring modern day Mounties and a thriller set in Canada not to mention the “stubbies” in the bar. Too bad it isn’t worth a second viewing. As for the poster, that I’d add to my collection.