Doctor Wong as played by Edmund Breese has invented an early form of television and he is open to bidders of all nations to lay claim to it’s rights. He’s dubbed the invention Radio Scope.

This plot point serves as the backdrop to gather some wacky characters together in China at the International House Hotel. Stuart Erwin is our American bidder who seems to find himself caught in a 3 way romance with Sari Maritza and Peggy Joyce Hopkins. By no means household names today.

It’s our bumbling world traveler who happens upon the hotel that you might be a little more familiar with, W.C. Fields. Not to mention the hotels house doctor and nurse. George Burns and Gracie Allen. Then of course there is the opposition to the American interests played by the nefarious Bela Lugosi as General Petronovich. 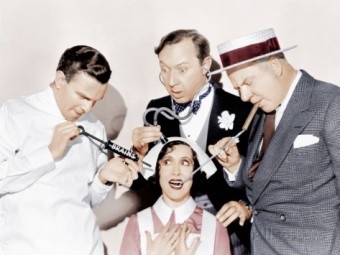 The plot is of little consequence as the film mainly serves as an opportunity to give audiences of the day a taste of vaudeville. This is well served with Burns and Allen doing numerous routines throughout the films short running time of 68 minutes. It’s also nice to see Bela turn up here in a non horror role in a film from a major studio as opposed to his poverty row efforts. He even gets in on some of the gags opposite W.C. Fields.

Along with Fields and company we are treated to musical numbers from the likes of Cab Calloway with his hair flying through the air as his body moves with the music. 47 years from here he would still be entertaining us fronting for Jake and Elwood. Also stopping by for a song are Rudy Vallee and Baby Rose Marie. As for a dance number we get some scantily clad ladies who in another year would have had there scene cut for a little to much see through material.

And how about a W.C. Fields line that never would have made a final cut after the “code” came in to being. When Peggy Hopkins Joyce states ‘I’m  sitting on something!” in Fields car he pulls over and discovers she is sitting on a cat. At which point he exclaims “It’s a pussy!”

This is another one of those Paramount productions that is owned by Universal studios. Way back in the day they purchased a back log of Paramount titles for distribution on television sets across the nation. If Paramount only new that some day we’d all want copies of our very own.

If you happen to be in the mood for a slice of nostalgia, you may want to take a look.