Up to this point in time I’d only seen one of director Masaki Kobayashi’s films. One that comes with my highest recommendation, Samurai Rebellion, starring the legendary Toshiro Mifune. With my two sons devouring classics of Japanese cinema as of late including the 26 Zatoichi films which I also found to be immensely entertaining as well as Kurosawa titles and various Yakuza thrillers, they presented me with this Tatsuya Nakadai starring effort. Both of them needling me that it’s a must see.

And right they were.

It’s an eerie start to this tale that sends us back to 1630. With peace in the land there is little employment for the samurai who live by a code of honor where “a samurai’s word is his bond.” Leading player Nakadai is a one time samurai who has fallen on hard times. Slovenly dressed he’ll arrive at the estate of a Feudal Lord overseen by Rentaro Mikuni looking to commit harakiri (ritual suicide) in the estate’s inner square. Before admittance he’s told the story of a previous samurai looking to do the same thing. And so begins the first of many flashback sequences that will eventually take us full circle back to Nakadai and the present.

In our first look back in time a young man, Akira Ishihama, presents himself at the estate looking to kill himself. We’re to soon learn that he’s gambling on a handout and to be sent on his way. But what awaits him is a Lord who has little use for the one time samurai warriors who have turned beggars arriving at his door looking for charity. He and a trio of trusted men under his command call Akira’s bluff and escort him into the courtyard where he is to kill himself. Worse still is they know that the sword he carries is one of bamboo which will only lead the young man to an agonizing death. Despite the young man’s desire to postpone his death he is all but forced to fall on his bamboo sword in what is literally a stomach turning sequence that still holds up nearly 60 year later.

Nakadai assures the storyteller he has no desire to back out of his commitment. He is then led into the yard where the Lord and his samurai gather round to watch. When Nakadai asks for a specific trio of “seconds” to assist in his demise he is told that all three are not available to behead him when called upon. Now it’s time for the mystery to unravel when Nakadai begins to tell his own story which sends us back in time to our next flashback. He was a celebrated samurai raising a daughter on his own and when his Master is exiled he finds himself without employment. When a fellow samurai kills himself, his dying wish it that his only son be raised by Nakadai.

That son turned out to be Akira Ishihama.

And so the heat and tension begin to rise in the courtyard.

There are plenty more mysteries to come but this is as far as I go not wanting to play spoiler. On the edge of my seat from the opening sequence, Harakiri, with it’s slow moving camera and pacing keeps the tension on a slow yet steady rise until the explosive finale. Matching the camera work is a nerve striking score by Toru Takemitsu.

I’ll freely admit to having less to say about those involved in the production. Mainly because I’m not well versed in the names of Japanese cinema beyond the ones that have made their way to the mainstream here in North America like Mifune, Kurosawa and the monsters of Toho. It’s because of Nakadai’s association with Mifune and Kurosawa that I’m aware of his presence in film. His connection to the famous director goes back to his film debut as an unbilled extra in The Seven Samurai, appearing opposite Mifune in a trio of Kurosawa classics, Yojimbo (1961), Sanjuro (1962) and High and Low (1963). He’ d graduate to the lead roles in later Kurosawa films Kagemusha (1980) and Ran (1985). Nakadai even turned up in one of those Zatoichi films I so enjoyed earlier this year.

I suspect there are plenty more films with Mr. Nakadai that are worth hunting down so please feel free with any recommendations you might have.

Now back to the director Kobayashi, I know what you specialists in Japanese cinema are thinking. “He said he’s only seen one of the director’s films and it’s the superior Samurai Rebellion. But why the hell hasn’t he yet seen the highly rated Kwaidan?”

Yes I know, I’ll get to it and yes indeed, we have a copy in the house thanks to Number 1 and Number 2 sons, Ethan and Kirk, who have begun collecting numerous titles of classic Japanese cinema. The film was an award winner at the Cannes Film Festival while the director was a Nominee for the Palme d’Or. I’ve no idea how easy it  is to get a copy of Harakiri but concur with my sons that it’s a cinematic journey well worth embarking on. 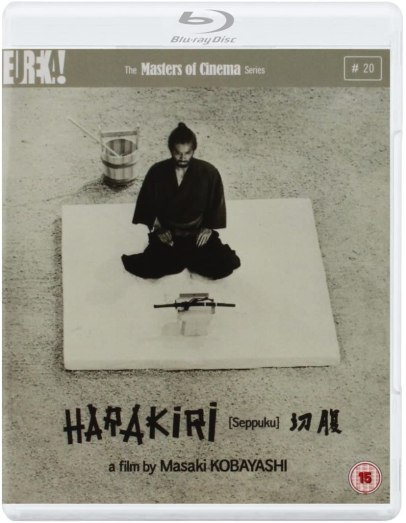