Just two days prior to the death of actor, Brian Denney, I cracked the seal on the blu ray edition of this 1987 feature that I’ve enjoyed numerous times since seeing it at the theater upon it’s original release. The reason was very simple, Number 2 son, Kirk, had pulled it off the shelf here in the movie room and asked if I wanted to join him. I didn’t hesitate for a second and pulled up a big old piece of floor and sat down with Brando the Weiner Dog by my side.

Alongside Dennehy is another actor who I never paid much attention to growing up despite his numerous film and television roles, James Woods. Once the mid 80’s approached that changed. I felt as though he really hit his stride and probably did his best work collectively during his run of film’s from about 1982 through to the early 90’s.

The plot of Best Seller begins with a 1972 prologue when a police holding area is held up by three masked men. One of who is clearly Woods behind the mask while one of the three officers on duty is Dennehy. Woods kills two of the three guards and leaves Dennehy for dead but not before taking a knife to the belly. Fast forward to the present day setting of ’87 which finds Dennehy still working the on force but also known as an acclaimed author for telling the story of the heist that still has never been solved with three killers unaccounted for. 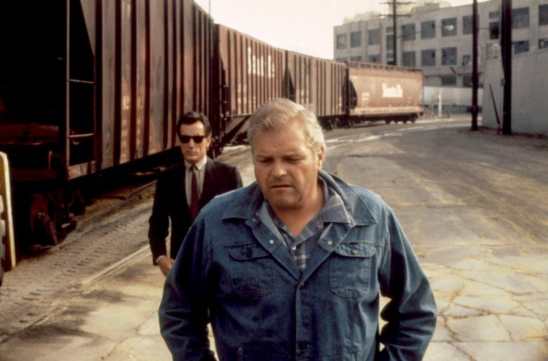 It’s during a smuggling bust that Dennehy is running he’ll see a cool looking man impeccably dressed in suit and tie sporting dark shades shadowing him as he trails a suspect. Woods will trail Dennehy closely and actually save his life by killing the suspect who has the drop on our barrel chested cop. And like a ghost he’ll disappear leaving Dennehy to ponder who was his slick dressed savior.

“I removed the liabilities.”

Let’s fast forward a bit. Woods is a hired killer and extremely efficient at what he does. For the past fifteen years he’s been under the personal employ of a wealthy businessman played by Paul Shenar. A man who is looked upon as a humanitarian and credit to the L.A. community. Woods has cautiously approached, Dennehy, to write his story as a way of bringing down his one time employer who has kicked him to the curb. All he needs to do is convince Dennehy that what he’s selling is true. 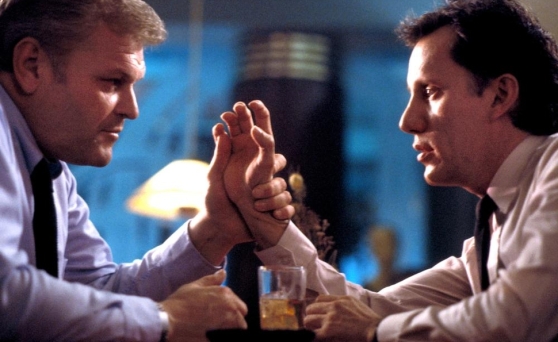 For years Woods has meticulously kept records and artifacts of his many killings while under the employment of Shenar. From a rifle rotting in a swamp to actually revisiting the sight of an accountant he murdered he begins to draw Dennehy into his world of misdeeds all the while seeking one thing his life on the outside has eluded him. A friend. A brother. The relationship between Woods and Dennehy is the driving force behind this underworld story. One that Dennehy is keeping at an arms length and while deep down he knows Woods is selling the truth, he’s wary of the killer yet falling under his spell despite himself and his fight for what’s right and what’s legal.

“Why don’t you just be a good cop and leave the killing to me.” 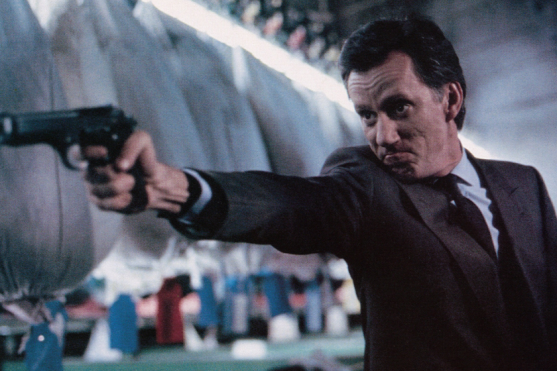 Once our villain of the story, Shehan, realizes he can’t buy off Dennehy’s unauthorized book he sends the dogs after our unlikely partners. Gun battles and exploding taxis are soon to follow as Woods and Dennehy dodge an army of thugs that are no match for the skills of Woods’ cold blooded professional. Once all the chess pieces are in play the ending of the film will prove to be just what Woods is looking for as the final chapter of his proposed best seller.

Both James and Brian are at the top of their game in this enjoyable thriller that proved to be the second film they starred in together. The first being a superior 1982 release, Split Image, that is worth seeking out. Best Seller also stars Victoria Tennant as Dennehy’s publisher who will have a terrifying encounter with Woods’ over the pages that Dennehy is submitting. He wants to be reassured that he’s coming off as sympathetic. “Am I sympathetic? Will they like me? Please don’t lie to me! Is it an important book?” With a knife pressed to her throat I’m not sure anything other than a resounding yes is possible. 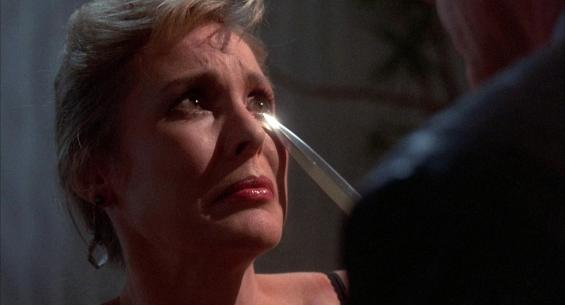 Another face or two that a film buff is sure to spot include Seymour Cassel in a rather thankless cameo as one of Shenar’s bodyguards and Charles Tyner as Woods’ father whom we meet while James and Brian take a trip back to the killer’s family roots. As Dennehy points out to Woods’ “You’re the American dream gone bad.” Tyner was a very recognizable face from the 1970’s appearing in movies like The Longest Yard, Emperor of the North and Family Plot as well as countless television episodes on popular shows of the era.

Best Seller was directed by John Flynn. A man who was no stranger to violent gun battles on screen. In 1977 he directed the cult favorite, Rolling Thunder, that comes with my highest recommendation and also gave us the Mob infused The Outfit (1973). Another well known name to cult fans is the credited writer on Best Seller, Larry Cohen. His name is connected to cult favorites including the It’s Alive Trilogy, Q The Winged Serpent, Hell Up In Harlem and The Stuff among many others.

Having fully intended to feature this Woods-Dennehy pairing for a number of years I went digging in the poster vault to pull out my original one sheet in preparation for this spotlight on a film I know I’ll be revisiting again in a couple more years. It’s just unfortunate this latest viewing went from a WOW factor while introducing it to Kirk to a somber day of sadness in short order. Like those who have gone on before him, we’ll always be able to revisit this fine actor whenever we like by just pressing play on our medium of choice.