Yes this movie really does exist and yes it stars classic film favorites Joan Crawford and James (or Jimmy as I prefer) Stewart. 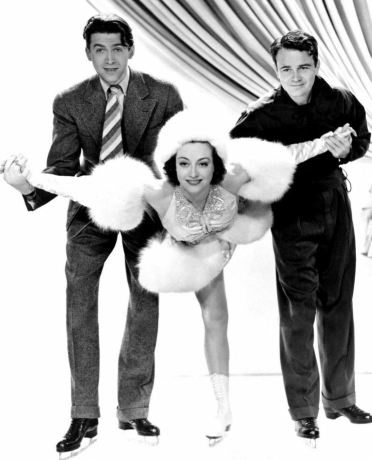 With a zippy score to start the proceedings we’ll find Jimmy and pal Lew Ayres complimenting a hockey game by providing on ice shenanigans in between periods. For an attractive gal the boys in the audience can look at they’ve got Joan on skates making it a trio. But times are tough and after their appearance the promoter lets them go which gets Jimmy all fired up in that classic “aw shucks” rambling style he was to make his own.

Trivia buffs please take note that when the trio exit the hockey rink with the paying public you’ll hear the parking attendants paging the stars as their cars are brought up to the front of the arena. Among the names being paged and promoted within this MGM production are their own stable of stars, Gable, Loy, Tracy, Young and Taylor. All big money makers at the time of this MGM release. Alas there are no cameos from these Hollywood icons.

Just as the trio are hitting bottom in the world of figure skating and ice capades, their jalopy gets rear ended in the aftermath of the hockey game by no less than a studio head played by Lewis Stone. Stone runs Monarch Studios and leaves his card promising to pay for any damages. Throwing caution to the wind, Joan and Jimmy get married with there last few bucks and Joan is off and running with Stone’s business card to play him for a sucker the very next day.

Not happening but Stone takes a liking to Joan, “Let me see your profile.” and signs her to one of those seven year contracts that was a staple of the biz back in the glory years of black and white photography which is just what this film has been photographed in under the direction of Reinhold Schunzel with the accompanying score by Franz Waxman. You’d think the money troubles were over for Joan and Jimmy and by extension Lew. Time for melodrama to rear it’s ugly head. After all this isn’t the year 2020 when women are a major part of the working force and in many cases bring home more bacon then hubby does. This just won’t stand for Jimmy circa 1939. His male ego has been tarnished. He’s supposed to be the bread earner and shortly after Lew walks out dissolving their partnership, Jimmy does as well leaving Joan to her Hollywood career. One that is steadily gaining steam.

Jimmy is looking to start an ice capades show and hit’s up promoter and king of the frog voiced acting fraternity, Lionel Stander. Lionel promptly sees money in Jimmy’s dreams and points out, “while there’s suckers, there’s hope.”  This in response to Jimmy wondering if Lionel will be able to raise the funds for the “really big show.” Thankfully Jimmy and Lew will reunite and before you know it they’ll have a hit show and now that Jimmy’s bringing in a substantial paycheck of his own he’ll be able to face Joan on an equal earning plain.

Whew! I’d hate to see Jimmy ending up a well kept man around Joan’s house in charge of distributing closet hangars and such. But then that might be better than taking more than a passing glance at this photo of him and Lew Ayres on skates AND in tights.

At a running time of just 82 minutes we can easily hack out 12 to 15 of those that have absolutely nothing to do with the plot. You see those extra minutes are meant to wow the paying audiences of 1939 with an ice follies show. The first segment had me wishing that Paul Newman and the Charleston Chiefs were in the audience ogling the girls with Morris making lewd comments as he did in the 1977 classic when the boys went to the ice capades to check out the ladies, “they oughta cut the costumes up a little higher on the thigh there so you can see more a….” Yeah I kind of wanted to drift off there for a minute and grab my Slap Shot DVD.

Now in all fairness to Ice Follies of 1939, the second segment highlighting the world of figure skating was done spectacularly in color. It actually comes across as a missing segment from The Wizard of Oz done on ice minus Dorothy and the Witch but adding in Cinderella and her Fairy Godmother. I won’t spoil the plot going on about how we got to this closing segment that sees Jimmy a Hollywood sensation but please don’t for so much as a second think that Joan and Jimmy are going to be on skates delivering an Olympic performance worthy of a gold medal.

I’d heard this wasn’t exactly a highlight in the careers of screen icons Joan and Jimmy and I guess I’ll have to agree with that line of thinking. But then I’d never actually seen this film making it one of the very rare Jimmy films I’d yet to sit in on. Growing up Jimmy was a regular visitor to our household thanks to westerns, comedies and of course his George Bailey. In Ice Follies his stardom was clearly on the rise scoring second billing to Joan where just three years earlier opposite Joan in The Gorgeous Hussy he was billed in 6th position below fellow MGM stars, Taylor, Barrymore, Tone and Douglas. Of course as a youngster I was less than enamored of Joan though I’d eventually come around to her as well. While I don’t believe history has been kind to Joan offscreen, there is no doubting her star qualities in her prime years. Once the film turns to color over the final reel, she’s absolutely stunning.

I guess if it wasn’t for the Warner Archive this is probably a film I never would have seen. But as I’m a certified fan of Jimmy Stewart I guess it was inevitable that I’d secure a copy for my personal collection now that it’s available. 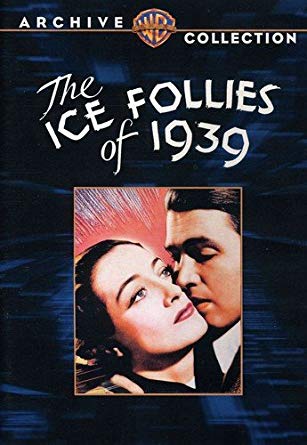