For those who have been regulars here at Mike’s Take, you know I like to make the 500 km drive down to Mars, PA located just north of Pittsburgh to partake in Monster Bash. A festival specifically catering to those of us who love the Universal Monsters, Hammer Films and most anything associated with monster movies pre-1970 and horror/sci-fi TV shows from the golden age of television. 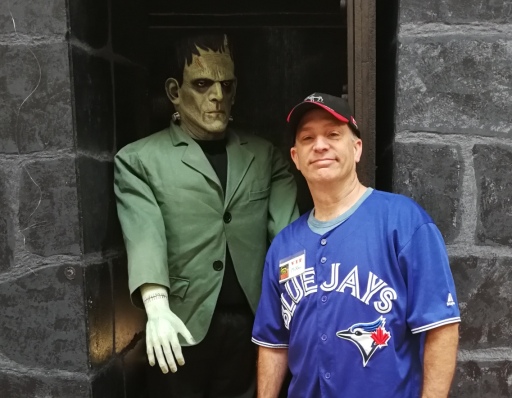 Here’s a brief look at the movies and special features I sat in on with a roomful of like minded fans.

War of the Worlds (1953) A true classic of sci-fi cinema. Byron Haskin directs though Orson Welles bowed out of the narration duties which have been assumed by Sir Cedric Hardwicke. Leading man Gene Barry stars as a scientist trying to figure out how mankind can defeat an alien invasion sporting the coolest looking space ships that ever graced 1950’s sci-fi cinema.

Topper Returns (1941)  Hilarious sequel to the earlier film that had starred Cary Grant as a ghost “haunting” Roland Young. This time it’s Joan Blondell’s turn to pay him a visit as she needs help in identifying her killer.  There’s some spooky goings on in the mansion where a reading of the will has been delayed. Great cast accompanies Joan and Roland for the eerie fun including Billie Burke, Carole Landis, George Zucco, Dennis O’Keefe and “Rochester” who kept me in stitches.

The Vampire Bat (1933) Vampire happenings are about the village that has Melvyn Douglas investigating with Fay Wray on his arm. Dwight Frye turns up in a very Renfield like role and then there’s Lionel Atwill as the village Doctor. Black and white film that has a great scene of the villagers carrying torches that have been tinted for the screen. Care to guess which of the four “name” actors are conducting some blood draining experiments?

Below the Sea (1933) Previously featured here this one’s worth hunting down as a gruff Ralph Bellamy and Fay Wray go to sea in search of romance and treasure.

Dr. X (1932) Another title I’ve featured previously sees Lionel Atwill conducting tests on a series of scientists who are also suspects in some gruesome murders that are plaguing the city streets. Fay Wray plays his daughter who is not only trying to avoid a killer but Lee Tracy as well in his customarily annoying take on a reporter who can’t take no for an answer. I suspect this one was pretty scary for audiences of ’32. Directed by Michael Curtiz.

Black Moon (1934) New to me title and I suspect a rare one. Jack Holt is married to a woman of the islands (Dorothy Burgess) who can’t escape her voodoo past. Holt is a wealthy businessman who sends her back to the islands for a vacation along with Fay Wray who plays his trusty secretary. Things are going to get horrific when the drums begin to beat and Burgess is dancing nightly with the natives offering up blood sacrifices. Holt is going to have venture to the Island to save his wife, child and Miss Fay. Like the song says, two out of three ain’t bad. No White Zombie here but a strange tale nonetheless.

Mystery of the Wax Museum (1933) Yes before Vincent Price there was Lionel Atwill. Fay Wray gets caught up in this tale of the mastermind who is dipping his victims in wax to replace the wax figures he lost in a brutal fire years previously. Atwill plays the demented artist who has lost the use of his hands but for those that have seen this or the Price film, you know there’s something beneath his facial exterior. Michael Curtiz directs this superior effort but I will be honest, I prefer the Price film for a number of reasons I won’t get into here. Maybe another time. 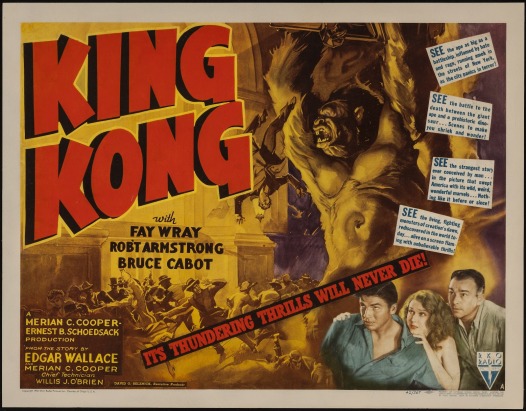 What Fay Wray day would be complete without King Kong (1933)? Willis O’Brien effects highlight Merian C. Cooper’s directing that sees Fay meeting the big guy in the jungles of Skull Island. Seriously, I’m not about to go over the plot details because if you don’t know Kong’s story, you’ve been living in seclusion you’re entire life.

Following Kong, Fay’s daughter, Victoria Riskin, took to the stage to chat about her Mother’s career as well her Father, Robert Riskin who was an Oscar winning screenwriter for It Happened One Night. She offered up a wonderful insight into the early days of movie making. More to come at a later date with Miss Riskin who was kind enough to exchange emails with me.

What’s My Monster …. A game show formatted to entertain us all with prizes for the contestants.

The New Invisible Man (1958) Time for the Bash’s Mexican Monster Night. Which brings us to this south of the border take on the Invisible Man which is more or less a remake of 1940’s The Invisible Man Returns. Pretty solid effects are complimented by a very skilled directing effort from one, Alfredo B. Crevenna. Playing the Vincent Price role from the earlier film is Arturo de Cordova.

Saturday’s line up I sat in on goes as follows ….

Son of Frankenstein (1939) Boris, Bela, Basil, Lionel. The third film of the series is for me always great entertainment and that’s thanks to Bela’s Igor and Basil’s over the top histrionics as he faces down a magnificent Lionel Atwill in his most memorable role. Everyone is at the top of their game except Karloff who sadly doesn’t get to do much in the third outing but I’ll blame that on the script which offers him little to do until the fadeout. Glenn Strange beware.

Return to Glennascaul (1953) Not a movie but a short story that sees Orson Welles pick up a stranger stranded in the Irish countryside. The man relates a ghost story to Orson that is enacted out in a flashback. Damned good ghost story with a dynamite line from Orson that scored laughter from this knowing audience. When the stranded man explains his car is having trouble with the distributor, Orson chimes in with, “I’ve had trouble with my Distributor, too.” This one proved a pleasant surprise not having seen it before.

The Invaders (1967) Series episode Dark Outpost was played to coincide with the appearance of special guest, Andrew Prine, who was appearing after the episode to chat about his career and field some questions from the audience alongside his lovely wife, Heather Lowe. No I didn’t ask him about his many forays into horror. No sir, I asked him what it was like to work on westerns with the likes of Jimmy Stewart, Dean Martin and John Wayne.

There was a lot of love in the air with these two both on stage and afterwards when I approached them to see if Andrew would be kind enough to sign my Grizzly one sheet. He commented that he deeply missed his co-stars from the film, Richard Jaeckel and Christopher George. 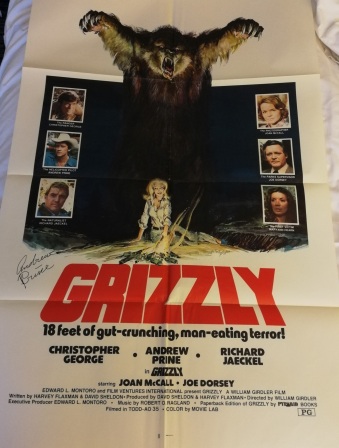 The Ghoul (1933) British made thriller starring Boris Karloff plays like The Mummy as it uses an Egyptian background for raising the dead. Meaning Karloff. Not a huge fan of this one but when in Rome…. Also stars Sir Cedric Hardwicke and a super young Sir Ralph Richardson.  With all these Sirs appearing shouldn’t Dear Boris be awarded a Knighthood posthumously? 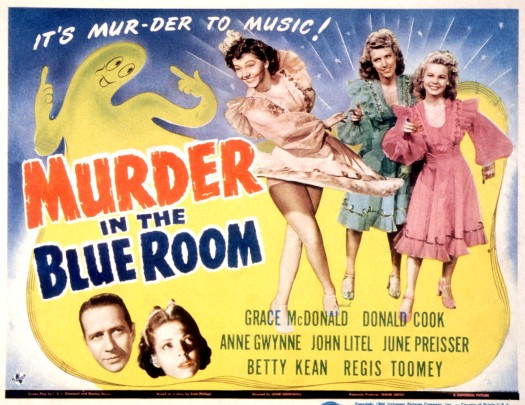 Murder In the Blue Room (1944) Rare title from Universal that I had never seen. For whatever reason it’s yet to turn up in any of their DVD box sets. An old dark house tale of murder and music with three gals looking to solve the murder of Regis Toomey for poor Anne Gwynne. Could the killer be John Litel? Maybe but one thing is apparently clear. Universal couldn’t get a loan out on The Three Stooges cause that’s what our female trio seem to be emulating as they search for the killer.

Speaking of Stooges, following the Blue Room the crowd was treated to a triple feature of Stooge shorts and not surprisingly, my number 2 son, Kirk, (who made the journey with me) and I roared with laughter as Shemp, Curly, Moe and Larry delivered the slaps, pratfalls and insults that have made them cult favorites for years.

No I didn’t see all the movies that were playing cause I needed to get over to the dealer room and pick up a few goodies including this one sheet.

I did sit in on Bash regular Mark Statler entertain the crowd with a 45 minute set of songs that included some specially written material for the classic movie fan.

Let them eat cake! Yes they feed us too.

And with Sunday comes the journey home. Till next year. 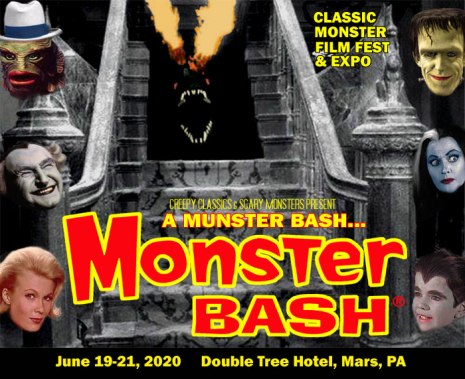 18 thoughts on “A Monster Bash Recap of Movies, Kong and Memorabilia”