During the final years of his cowboy career, Audie Murphy, finds himself cast in this Sidney Salkow outing as a man who has earned a reputation as a “quick gun.” Audie figures it’s time to go back to his roots and settle down if the people he ran out on years ago will have him. This includes the blonde haired school teacher, Merry Andrews, who Audie is hoping to start anew with.

It’s a peaceful opening at the start of the film as Audie rides into frame like he’s done in so many westerns before with a touch of narration to accompany him. The plot will waste little time separating the good guy from the bad. As Audie nears his hometown of Shelby he’s brought in at gunpoint to a camp that’s heavily guarded to meet the ringleader of a gang of outlaws. Audie’s surprised to see the main heavy is none other than his old saddle pal, Ted de Corsia.

Film goers shouldn’t be surprised to see de Corsia talking loud and looking mean. Seriously, wasn’t he always like that when the cameras were rolling?

Audie soon realizes this gang of cutthroat raiders in the tradition of Quantrill are on their way to the town he once called home to rape, kill and steal. When he rejects the notion of joining in on the “fun” he sets himself up for certain death and will have to use both his guns and a human shield in the form of de Corsia to escape their camp. Audie’s now on the run and rides hard to warn the townsfolk of de Corsia’s planned raid.

Time to slow the heated plot down for a while and let things simmer over a drink in the local saloon. Audie isn’t exactly welcomed back with a handshake from those that see him ride into the Hollywood backlot where this was filmed. His old pal and western regular James Best is now the Sheriff and his sudden appearance has Miss Andrews angry over what might have been but she’s moved on (really?) and is now engaged to Best. Quick raise your hand if you think that engagement is going to last now that Audie is back in town?

The town makes it clear to Audie that he isn’t welcome. Among those stern faces glaring at Audie you might recognize include Frank  Gerstle, Charles Meredith, Frank Ferguson and Walter Sande who has waited two long years for Audie’s return. Audie had killed his two sons in self defence which prompted his leaving town but that’s not the way Sande remembers it and he wants to see Audie dead on the saloon floor or hanging at the end of a rope. And try he does.

Let’s not forget the reason Audie sped into town quicker than he had intended. He’s just not sure he cares anymore after the ice cold reception he’s been given. Still he tells Best of the gang headed this way though there are some whispers circulating that Audie himself is in tight with de Corsia’s gang and doing some reconnaissance work. When Audie has to defend himself resulting in a killing, Best, locks him up which puts Audie on the sidelines for the battle that’s about to begin between the ill equipped shopkeepers and store owners versus the seasoned killers that are knocking on their doors.

Am I really spoiling anything here if I point out that Audie is going to have to get out of that cell, kill of the heavies, have Best either step aside or get conveniently killed (you pick) and recapture the heart of the blonde haired school teacher and of course live happily ever after?

I didn’t think so.

Cliched to say the least, Quick Gun was a long way from Audie’s earlier years working under John Huston’s direction and the better budgeted pictures he’d make for Universal International during the studios run of enjoyable technicolored westerns of the 1950’s. But a man’s gotta work and Audie is still an enjoyable presence on camera even if the material was by this time becoming stale and beneath his talent level.

Aside from big budgeted westerns from “A” list directors starring the John Wayne’s of the world, westerns of the “B” variety were slipping fast by this point in time as bankable productions. Mainly due to the amount of westerns on television most weeknights and the soon to be popular influx of Italian oaters which would prove to be game changers. The Quick Gun would be one of Audie’s final few features before his untimely death in 1971 at just 46 years of age.

Having long been a fan of Audie’s movies since childhood it’s easy to overlook the latter films of his career and their overall drop in both quality and budget. He always maintained a certain amount of likable boyish charm on screen and considering he was an action star he had a calm demeanor in front of the camera. I believe Audie was also a far better actor then he was given credit for at the time. So is The Quick Gun any good? I guess that’s debatable and it also depends on what we’re comparing it to. No it’s not as good as the “B” westerns of the 50’s but in comparison to plenty of low budget 60’s efforts, it plays just fine.

And of course, there’s Audie to recommend it. 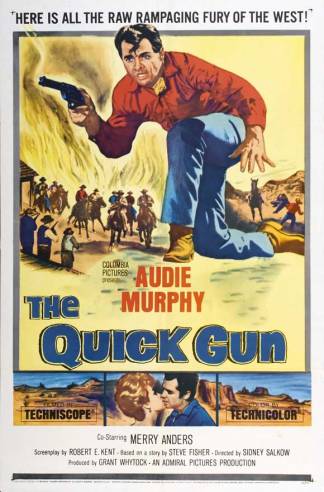