Not having seen this since it came out on VHS in what I imagine looking back was the year of it’s release, I recalled it as another Alien rip-off. Now that’s still a fair comment but it’s also got a healthy dose of Bava’s Planet of The Vampires from 1966 and Hawk’s 1951 The Thing as a template that sees an elongated cameo from the one and only Klaus Kinski. Klaus being my main reason for the revisit. I’m quite sure a few other ideas may have been lifted along the way from past sci-fi efforts. Feel free to toss some titles at me if you see the connection.

Directed by William Malone and made on the ultra cheap, this sci-fi tale of space travel makes the best of it’s miniscule budget. For me Kinski is the only actor of note but that’s not saying I didn’t recognize a face or two though I’m sure at the time it’s the crazed actor from German Cinema that was the highest paid thespian on the call sheet.

Two space ships find themselves on a moon of Saturn. One from Germany and the other a U.S. vessel. Low and behold two astronauts find an inner chamber of a past ship or civilization. I’m not sure. Either way something is moving and alive inside that glass sarcophagus. Minutes later that returning ship crashes into a space station prompting Starfleet or whatever this movie calls it to send another ship to see what lays atop that Saturn moon.

The crew includes Lyman Ward, Stan Ivar, Wendy Schaal, Marie Laurin and Robert Jaffe. As I was saying, Klaus was the paid headliner. 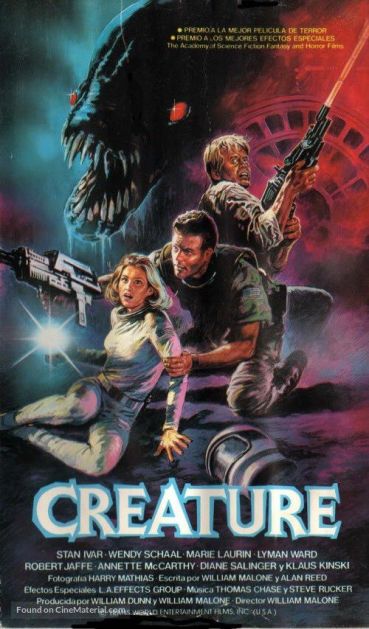 The above crew make great screen time in arriving at their destination. And what do they find? Better yet, what finds them? Yes it’s the sole survivor of the German expedition, Mr. Klaus. He’ll tell the story of 21 men in his command that are all dead. Upon landing, the ship that our U.S. crew arrived on has been damaged. Air supply is a major problem prompting them to look seriously at Klaus’ proposal to abandon their ship and head over to his. Time to put those spacesuits on and see what’s out there.

Plenty of corpses from both previous expeditions. It’s a bit of a vampire show much like the atmospheric Bava effort from 1966 when crew members are feasting on each other. As this is a low budget exploitation affair, why not have the lovely Marie Laurin who has become a member of the undead, drop her space suit and all that goes with it revealing her birthday suit to get sexy with her lover right on the rocky plains of Saturn’s Moon. Yeah the dumb bastard falls for it and before he knows it he’s out looking to feed himself upon the remaining crew members who’ve made their way to Klaus’ ship.

Why not bring in a red herring or two to keep us guessing who will make the final reel if indeed anyone at all. Klaus is always suspect when it comes to these affairs so one shouldn’t be too surprised if he begins to look like a zombie. On that note wouldn’t it have been absolutely awesome to see Klaus turn up today as a member of the walking dead that have plagued us for the past ten plus years on multiple TV shows or movies?

As a plot device this script even has one it’s characters reference an old black and white sci-fi flick where a vegetable like creature is reduced to nothing by electrocution. In other words why not include a tip of the old cap to the 1951 classic The Thing From Another World. I’m a bit surprised in the end the writer didn’t do the same thing with another character pointing out he’d seen this cool movie years ago with guys decked out in leather piloting a ship to a strange planet where they all slowly become infected by a vampire like race. “Starred a guy named Barry Sullivan if I recall.” one of the other crew members could pipe in.

Passable entertainment for those that enjoy the good old days of the VHS rental with a healthy bucket of gore splashed across the screen accompanied by a bit of nudity to keep the boys in the audience happy. With plenty of dry ice and flashing lights, the production stretches the budget as far as it can go to give us that deep outer space feeling and succeeds on a “B” movie level.

By this point in his career Kinski didn’t have to many films ahead before his death in 1991 but he did tangle once more with Werner Herzog in what was an ongoing love-hate relationship that has given them both everlasting fame at the movies. Creature might turn up in a bin of discarded VHS tapes if you’re on the hunt and that might be best because the version I watched released in a budget label collection from Echo Bridge selling Croczilla as the headliner left a lot to be desired in quality. I’ll have to go find the box containing my VHS copy in the garage to see if it plays any better.